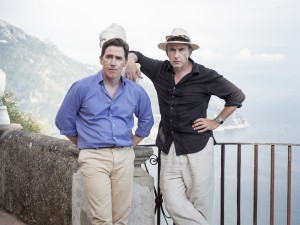 The Trip will return for its third series on Thursday April 6th. Whereas the previous two series aired on BBC Two, the show has now moved to Sky Atlantic, and the opening episode will see Steve Coogan and Rob Brydon travel to Santander in northern Spain. In a recent BAFTA event to launch the [...]

This new clip gives us a first look at Rob Brydon and Steve Coogan in The Trip to Spain, which will be broadcast on Sky Atlantic in [...]

The new series of The Trip, starring Steve Coogan and Rob Brydon, will start filming in September. The third series of the part-improvised comedy travelogue will be filmed in Spain. The duo will be visiting Cantabria, the Basque region, Aragon, Rioja, Castile-La Mancha and Andalusia. We hope, [...]

Some of you may have seen Steve Coogan – The Inside Story on UKTV GOLD last Saturday evening – a look back at Steve Coogan‘s comedy career, with contributions from Reeves and Mortimer, Ben Miller, Kevin Eldon, John Thomson, Mark Williams, Matt Horne,  Julia Davis and many [...]

Steve Coogan and Rob Brydon were recently interviewed about their recent series The Trip to Italy, as part of a live Q&A screened to over 180 cinemas across the UK. Giggle Beats has just published a transcript of the interview, which sees the pair reminisce about the ups and downs of working [...]

The Trip 2, starring Steve Coogan and Rob Brydon as version of themselves, starts tomorrow at 10pm on BBC2. The second series of the dining-themed travelogue comedy series places the duo in Italy, as they trace the footsteps of Byron and Shelley. Brydon was interviewed about the show in [...] 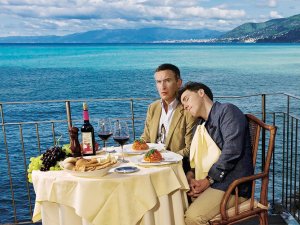 As we’ve previously mentioned, the second series of The Trip, starring Steve Coogan and Rob Brydon, will be hitting our TV screens later this year, following its premier this month at Sundance. This weekend Coogan and Brydon talked to The Guardian about the show. The new series sees the pair [...]