Filming has begun on This Time With Alan Partridge, which will be on BBC One later this year. The new six-part series will see Alan handed a career lifeline – the chance to stand in, temporarily, as the co-host of This Time, an evening weekday magazine show. Joining Steve Coogan on the sofa [...]

The BBC has told us what we can expect from Alan Partridge: Why, When, Where, How and Whom? which is set to air over Christmas. They say: “It has been a quarter of a century since a little known sports reporter was given his own radio chat show by the BBC. Two radio series, five TV series, [...]

It has been confirmed that Alan Partridge will be back on both BBC One and BBC Two. BBC Two will broadcast a 25th anniversary special before the end of the year, marking 25 years since his debut on BBC Radio back in 1992. A BBC One series will then air next year. Both are set to be produced by Baby [...]

Steve Coogan has revealed that Alan Partridge will be ‘the voice of Brexit’ when he returns to the BBC. Coogan told The New European that the new series is due to air on BBC2 in spring 2018. Alan was last on the BBC around 15 years ago, and in recent years he has been on Sky (and of [...]

I’m Alan Partridge is 20 years old this year, so the good folk behind the Pilot Light TV Festival are putting on a celebratory shindig in Manchester next month to celebrate. AHA! I’m Alan Partridge 20th Anniversary Celebration Special will see the Norfolk broadcaster, who first rose to [...]

Steve Coogan fans have a chance to own a replica of the car owned by his most famous creation, Alan Partridge, which is currently sale on eBay. The 1998 Rover Saloon appeared in I’m Alan Partridge and was vandalised with the words “cock piss Partridge”, which was then changed to [...]

The nominations for the 2017 TV BAFTAs have been announced, with plenty of TVO-connected shows and performers receiving nods. Here’s a roundup of the nominations with the TVO-linked ones highlighted: Scripted Comedy Camping (Sky Atlantic) Fleabag (BBC3) Flowers (Channel 4) People Just Do [...]

Steve Coogan stars alongside Richard Gere in new film The Dinner. Coogan and Gere play estranged brothers who meet with their wives (Laura Linney and Rebecca Hall) for a dinner where ‘family drama and dark secrets are on the menu’. See the trailer for the psychological thriller [...]

Nominations have been announced for the 2016 RTS Craft & Design Awards, which celebrate talent behind the scenes in television production. Here’s a roundup of the TVO-connected shows that have been recognised in the award nominations: Flowers – Selina MacArthur is nominated for [...]

In a newly released audio clip, Alan Partridge introduces us to his upcoming book Nomad. The book has been written by Steve Coogan, along with Rob and Neil Gibbons, and is due to be released on October 20th this [...]

Alan Partridge is making the trip from Norwich to Manchester to launch his new travel book. Expect to see Steve Coogan somewhere in the vicinity too. Steve’s alter ego will be at Waterstones Deansgate on 25th October to sign copies of his new book Alan Partridge: Nomad. Alan’s [...]

A new Alan Partridge memoir, entitled Nomad, will be hitting the shelves on October 20th this year.  While the bestselling I, Partridge released in 2011 was an ‘autobiography’ of Steve Coogan’s iconic character, Nomad will take the form of a ‘journey journal’ as [...] 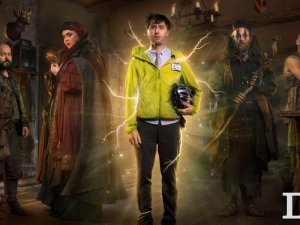 Dave has commissioned Zapped!, a new fantasy comedy from Baby Cow Productions with Steve Coogan as Executive Producer and a cast that includes Paul Kaye. Baby Cow is the production company of Steve Coogan and Henry Normal which has been behind lots of TVO favourites such as The Mighty Boosh and [...]