The League of Gentlemen return with three anniversary specials next week, and TVO has been lucky enough to take a sneaky peek at the first two instalments. 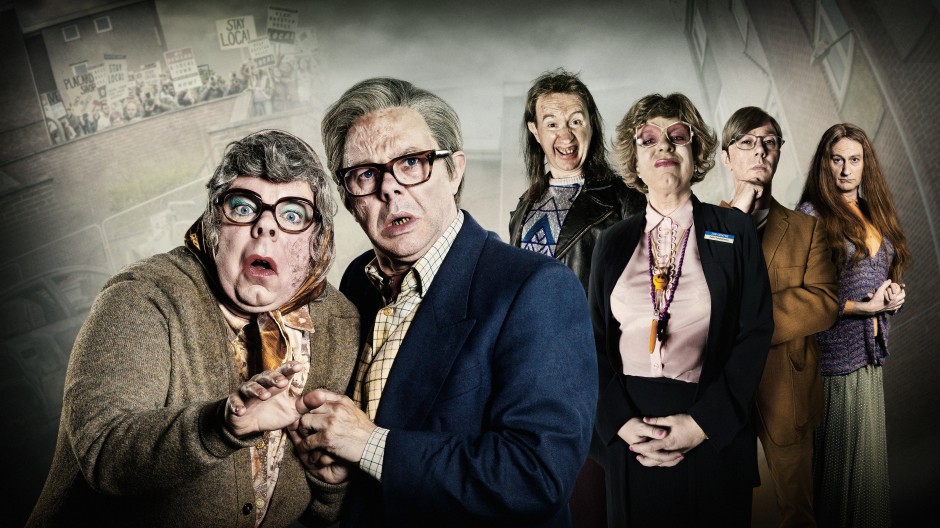 Fifteen years after the third series, twelve since their movie spin-off and final UK tour together – is it worth the wait and deserving of the hype? With some very minor spoilers, our editor in chief, Paul Holmes, found out…

There was a time when the only people in showbiz having reunions were has-been pop-stars of the kind Les McQueen would have claimed to have played rhythm guitar for (on the demo) back in 1982.  Then came the big guns of music and comedy, from The Stone Roses and Led Zeppelin to Monty Python and Goodness Gracious Me.

To say every big name reunion has worked out would be a bit of a fib, and sometimes it’s been best to leave the past in the past. This feeling couldn’t help but linger in the back of our collective minds when it was announced that The League of Gentlemen would return to celebrate twenty years since both their Perrier Award winning Edinburgh show and their BBC debut with radio series On the Town with The League of Gentlemen.

A classic League of Gentlemen shot from the first series in 1999. © BBC

After all, across three further televised series, a Christmas special, a fully fledged high-concept movie and two sell-out tours of the UK, The League of Gentlemen had blazed a bold trail. As a teenager, their work was as vital to me as pens were to Pauline Campbell-Jones. I made the pilgrimage to Hadfield, where the show was filmed, after the second series aired. I had a life-sized cardboard cut-out of Papa Lazarou, and could quote you his ad-libbed gibberish to this very day (even the deleted bits). When they filmed in my local garden centre for the third series, I was more excited than I thought it was possible to ever be about a garden centre. The League of Gentlemen was special, so much so that I made a decision over half a decade ago to stop watching it (and a handful of other shows) over and over again, and to only revisit it when it could feel fresh once more.

The news of these special episodes prompted that eventual rewatch after all these years, and while there were parts of the show which hadn’t held up as well as others, and there were whole scenes which were still stuck in my mind to recital level, it was a joy to rediscover the series blackly comic finer points once again, but now with the knowledge that there was to be a new and hopefully fitting coda to their legacy. All four of The League had gone on to great acclaim with wonderful work such as Inside No. 9, Psychobitches and Sherlock in the years since, so surely they’d only be revisiting their old creations if there was a point to it, and not just as a cheap cash-in?

Still, there was a genuine fear that, as wonderful as the old series was, some of it was very much a product of its era and could simply be uncomfortable viewing if aired today, and that’s before we considered the possibility that – whilst their work apart in the years since has been a delight – the reunion just might not actually be that funny.

So here’s the good news: it works. Big time.

Writers and stars Mark Gatiss, Steve Pemberton and Reece Shearsmith, writer Jeremy Dyson, returning director Steve Bendelack and Inside No. 9 producer Adam Tandy have managed to not only make a successful return to Royston Vasey that feels like they’ve never been away, but also have fused that template into some insightful social commentary, and a big budget look the original series could only dream of.

To say too much would spoil half the surprises, but perhaps the cleverest stroke of these anniversary specials is to mirror the original series from the get-go, joining the story as Benjamin Denton returns to Royston Vasey for the first time since he left at the end of Series Two, in a sequence that harks back to the very beginning of Episode One right back in 1999.

And that’s not the only sweet touch throughout the new episodes, which are jam-packed with carefully placed in-jokes to please the show’s hardcore following, from the Lost & Found posters put up around town, to the latest iteration of The Full Monty spin-offs that are still going strong. There’s even a beautifully done visual reference at the climax of episode one that will surely please fans of Pemberton and Shearsmith’s post-League output that we won’t spoil – just look out for it. 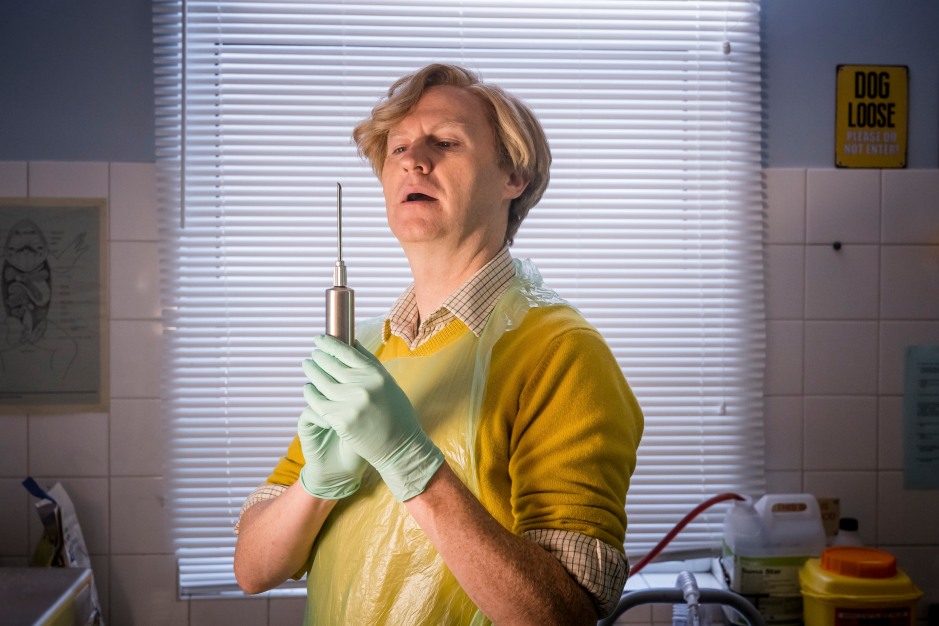 Throughout the opening two episodes (the third and final part is being kept strictly under wraps until next week), there are appearances from most of Royston Vasey’s most beloved characters – from Reverend Bernice Woodall, who is the latest foul-mouthed Town Mayor for poor hapless Murray to keep in check; to Herr Lipp back in town to, as the trailer revealed, “dig up some old friends”; and Mr Chinnery has another couple of tragic appointments with vastly improved special effects. So far, so expected, perhaps. This could have been a pointless jaunt through the jolly old catchphrases of old, and with that trio of characters, it could almost be just that from the initial instalments alone.

Underpinning most sequences, however, are two themes that drive the episodes forward – loss, and the passage of time. The latter is obvious from the technology on display – there’s no need for Benjamin to use a payphone any more when he’s carrying his own mobile phone, whilst Tubbs has her own wonderful experience with a tefalome of her own that isn’t just a quick gag, but an ingenious way to advance the plot. Similarly, time is a respecter of change, and while we initially thought the League might shy away from including transsexual cab driver Barbara Tattsyrup (nee Dixon), they’ve found a perfect way to make her work in 2017.

So too, do these two themes become a driving force of the main sub-plot of the series – that Royston Vasey is to be engulfed into a bigger town and thereby erased from the map, with its rows of boarded-up shops and its astonishing track record for missing persons being swallowed up and brushed aside. Whilst the concept is exaggerated for comedic effect, it nevertheless remains a genuine fear for many small communities across the UK who pride themselves on being – well, local – and you have to hand it to the League for tackling the subject in an inventive way.

But crucially these undercurrents of loss and time passing us by define the episodes in many ways, and like much of the best work that the League have done since the series originally ended, allow the comedy to shine through bittersweet situations.

Take Geoff Tipps, now working at a garden centre part-time, struggling to make ends meet, and his only friend Mike Harris, whose marriage has reached such a terrible state that he’ll consider drastic action to find peace. Or there’s Al, Richie and their long-absent Pop, who has returned after a long time to reignite old fears that had previously haunted both his two sons, and Al’s wife Patricia (a brilliant returning cameo from Carshare star Sian Gibson).

Then there’s the story of Ollie Plimsoles, former head writer/director/star of Legz Akimbo Theatre Company, who is now a teacher with his dreams of stardom now purely his dreams alone. Elsewhere, Henry & Ally, the former video-store regulars, are desperately trying to flog pirate DVDs to people half their age. And there’s a beautiful monologue from Mark Gatiss’ new character Toddy which has the hallmarks of Mark’s other Royston Vasey loners Mick McNamara, Owen Fallowfield and Les McQueen, yet still manages to do something quite moving with bingo numbers that acts as a welcome change of pace at just the right point in the middle of Episode Two.

But most especially, there’s Pauline and Mickey. It’s extremely hard to say anything about their appearances (or that of former nemesis Ross) in the new series without ruining the narrative, but what we can say is that it’s while it’s a joy to see these characters, they remain one of the emotional cores of the series and what happens to them this time around will tug at your heartstrings in ways you didn’t think possible.

Make no mistake though – these episodes are as funny as the originals, if not more so in places, from Barbara’s favourite pronoun to some sublime physical comedy from Reece Shearsmith as Geoff tries to travel stealthily. Legs Akimbo and Bernice continue to push the boundaries of good taste, The Dentons are dialing in from a weirder reality to everyone else, and Tubbs & Edward remain as deliciously and potentially murderously bonkers as ever.

And through it all the core acting trio of Shearsmith, Pemberton and Gatiss never break the precious things that made their characters so oddly lovable in the first place – they slip into them all like old outfits that still fit perfectly, and even when times have changed and the character doesn’t quite fit into our world anymore (such as the odorous Pop), in most cases they still find a way to make them work for a new generation. And even when that doesn’t quite pay off in a tiny handful of characters, they at the very least play them through their regular scenarios with such gusto that you can forgive them their folly because it’s still delightful to see them back on our screens.

What we have here is a faithful continuation of what went before – right down to minor plot points being explained (or at least explicitly referenced) – so that future fan marathons will allow these episodes to sit right alongside the original three series and that glorious Christmas special as one complete narrative cycle (The League of Gentlemen’s Apocalypse appears to remain in its own special bubble… or does it?).

Factor in a mysteriously unexplained photo booth, and the promise of yet more favourite characters returning in the third and final instalment, and it’s fair to say that these three new episodes are crammed full of special stuff and demonstrate that there’s a lot of life in Royston Vasey yet. If there’s one complaint, it’s that 90 minutes doesn’t feel long enough, so as long as The League of Gentlemen have something to say, we’ll always be willing to allow them to use Royston Vasey to say it. Let’s hope we don’t have to wait til the 30th anniversary to see them again…