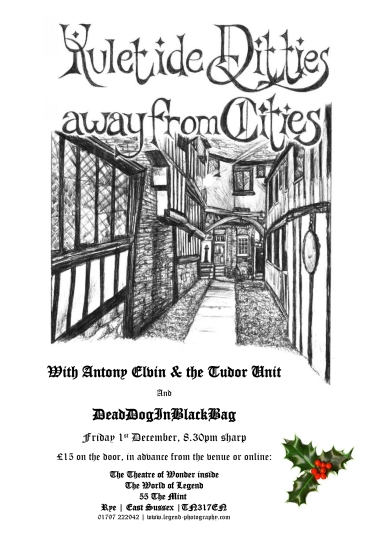 Christmas comes around just once a year, but chances to see Antony Elvin & The Tudor Unit alongside a newly revived Dead Dog In Black Bag are even rarer!

As the fawning lights encroach around every corner, and the murky fog smirks like an insinuating, co-dependent drunk, the season of rictus-enabled shopping is close at hand. But a new force is afoot in Rye with a mission to fight the beigeness of lounge-sensibility, to slap the nodding dogs of mawkishness with the wet fish of fine wit, acerbic tinsel-darts and a complete lack of empathy.

Yes, it gives us great pleasure to say that on 1st December 2017, Antony Elvin & frequent collaborator Will Summers (the aforementioned Tudor Unit) will be performing their amped-up 16th century folk-rock at The Theatre of Wonder within The World of Legend – a unique parlour theatre space in Rye, East Sussex.

And even more excitingly, they’ll be joined by former frequent collaborator Holly Jane Shears for a new and exclusive Dead Dog in Black Bag set – marking the first time they’ve shared a bill together in long, long time… we think possibly since The Velvet Onion Live in May 2012, and before that, perhaps as far back as early 2010!

Of course, Shears and Elvin both appeared in Series 3 of The Mighty Boosh together, before both joining Summers in prog-folk collective Circulus for several years. The chance to see them back together in an intimate setting – one act bringing haunting and delightful soundscapes back from across the ages, the other providing a solid dose of postmodern electropop retro-filth, is too good to miss… so much so that TVO is really tempted to find out how much train tickets to Rye actually are!

If you’re able to get there on 1st December, tickets are available on the door (or in advance from the venue) for just £15. Keep your eyes on the Facebook event page for more details.