Hang on to your bonnets – Jane Austen themed improv show Austentatious is currently on tour across the UK, and to celebrate, TVO caught up with the team and decided to ask each of them just one question.

Imagine a cross between Russian Roulette and Smash Hits ‘Oh No Not The Biscuit Tin’, and you’re not too far off the mark, except with much better Regency get-up and nobody dying. And sadly fewer biscuits. This is the result…

The Velvet Onion: Were you a fan of Jane Austen’s work before getting involved in the show, and has all this improv on her themes changed your perception of her work?

Rachel Parris: Before starting Austentatious, I certainly liked her novels but had only read a couple. It was after creating the show that we all made an effort to get to know her work better – and having read her books, her letters and learned more about her world, I am a bigger fan now than I ever was. I think doing improv around her style makes me take notice of the less obvious sides of Austen – the moments of mournful feeling, the biting sarcasm, the fervent frustration. She’s known for light witty conversation but doing this show reminds you she wrote much more than that, and we try to incorporate all that into what we do. It’s a challenge!

TVO: What’s the best bit of improv you’ve seen come out of the group so far?

Andrew Hunter Murray: ‘Best’ is tricky, but the most effective was probably at this year’s Edinburgh Fringe, when Joseph took all his clothes off to play a nudist. This sounds relatively easy, but when you consider the amount of buttons involved in a Regency costume, it’s actually extremely impressive.

TVO: You ask audiences to come up with titles for lost Austen works. What’s the weirdest one you’ve seen?

Charlotte Gittins: After six years, you could be forgiven for thinking we must have heard every possible title suggestion, but our audiences continually come up with mind-blowing new gems. We’d need an entire novel to run through all the weirdest titles we’ve received, but ‘Godzilla vs. Mega Darcy’ was definitely up there with all the great literary classics. Who better than Jane Austen to tackle the fractious romance of reptilian monster vs. bionic man in all its scaly, homoerotic glory? Somebody pass the smelling salts…

TVO: Do you prefer improv to performing scripted comedy?

Amy Cooke-Hodgson: I don’t think I can choose between them! There’s something very satisfying about rehearsing and crafting a sketch or performing in a comedy play – you get the chance to tweak the timing.

I was lucky enough to play the Queen in the UK premier of a long lost Cole Porter comedy musical for a six week run. Because it had never been seen in the U.K. before, there were no expectations of how the role should be played, which was a gift. It was a real lesson in making it ‘different every night’; the perfect opportunity to experiment with delivery. 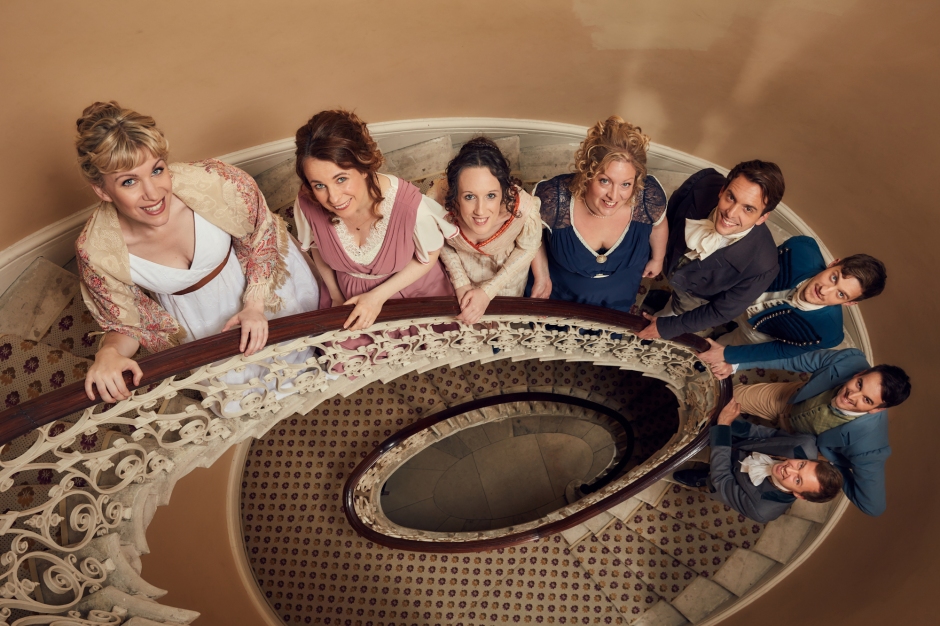 TVO: You can only read one Jane Austen book ever again. Which one?

Cariad Lloyd: I know it’s obvious, but Pride & Prejudice is still my absolute favourite. I think the cool kids like Persuasion, which I do also love. But for pure joy filled writing and to simply spend time with as excellent a character as Lizzie Bennet, it has to be P&P for me. I always think of it as a gateway book for Jane Austen – if you’ve never read or seen anything she’s done, start here and you get exactly the style and why we’re still going on about her 200 years later.

TVO: If you were an Austen era tavern, what would you be called?

TVO: How much fun was Crosstentatious, and are drag shows going to reoccur?

Daniel Nils Roberts: It was loads of fun! Just for anyone who doesn’t know, Crosstentatious (as the name suggests) is an annual cross-dressing take on our show that we do for charity. Obviously it’s tonnes of fun squeezing into chest-hair exposing dresses and daubing on daft beards, but it is also a chance to turn the restrictiveness of Austen’s writing on its head. In many ways it’s a bit of a relief as a performer to be able to throw off the templates of cossetted female characters, and sombre menfolk, and mix things up a bit. There’s always quite a different atmosphere too – we do it late at night, so we get quite a different audience, and lots of returning fans, which means it turns into a baying hothouse of bawdy references and is all performed with a bit more abandon. And of course it’s lovely to think that such silliness raises lots of money for amazing charities (always Waverley Care when in Edinburgh). We’re sure we’ll be back next year – XL stockings at the ready!

TVO: What’s your favourite thing about going on tour, and what would you rather skip about the whole affair?

Graham Dixon: My favourite thing about touring is the games we come up with and play in our tour van. I wish I could say that we are doing something more rock and roll in our tour van, like sulkily recovering from apocalyptic hangovers and callously ignoring the desperate messages of spurned groupies, but the reality of the Austentatious tour bus is no doubt what anyone who has seen the show would expect. We are all massive nerds, so we spend our time playing adorable, esoteric word and guessing games. Every van journey turns into Boxing Day around the fire. The thing I could skip is actually doing the shows. Just get me back in the van so we can play “TV Commissioner” and “2.4 Children” (These are actual games we play).

TVO: Lastly, one for anyone and everyone… apart from Austentatious, what are you all doing next?

Many various projects! Joseph is doing his show Hammerhead at the Soho Theatre, Andrew is going on tour with his podcast, No Such Thing As A Fish. You can see Charlotte in Poland and Australia at various impro festivals, Cariad continues to host Griefcast, a podcast where she interviews comedians about death which is cheerier than it sounds! Rachel is gigging around the country and also performing in new improv troupe with Marcus Brigstocke, There will be Cake. Amy is also performing with improvised Enid Blyton, The Bumper Blyton Improvised Adventure, Graham is performing his Edinburgh show Graham Dickson is The Narcissist in London, and Daniel can be found in the long running improv comedy show Racing Minds. Basically we’re busy!

Big thanks to team Austentatious for playing along. You can catch them on tour across the UK now, and in the West End for shows in the Winter.