When Upstart Crow arrived on our screens last year, it struck a chord with audiences thanks to its very British subject matter – William Shakespeare, whose work all of us are familiar with in some shape or form, with a heavy dollop of satire about the class system thrown in. He may be celebrated now, but a time when most poets and playwrights were posh and privately educated (who can imagine it, eh?) Shakespeare was mocked and underestimated by his peers for his lack of a university education, as well as for his less than noble family background. A clever man with big ambitions, constantly getting thwarted by the higher-ups… it’s a wonder nobody thought to put the Bard at the centre of a sitcom before.

“So here we go again” says Will (David Mitchell) at the beginning of series two, as he applies for his family to have a coat of arms, which would officially make he and his father ‘gentlemen’. Unfortunately the gatekeeper is his rival Robert Greene (Mark Heap) who would do anything to prevent Will from rising up the ranks. When an African prince arrives in the city, Will sees a chance to impress Greene by hosting a dinner party with the prince in attendance… while Greene seizes the opportunity to cause chaos, by encouraging romance between the prince and Kate (Gemma Whelan) and then making him think she loves Will instead. This plot will sound very familiar to people who know Shakespeare’s Othello, but as with all of Upstart Crow, knowing the source material is by no means necessary to enjoy the episode. 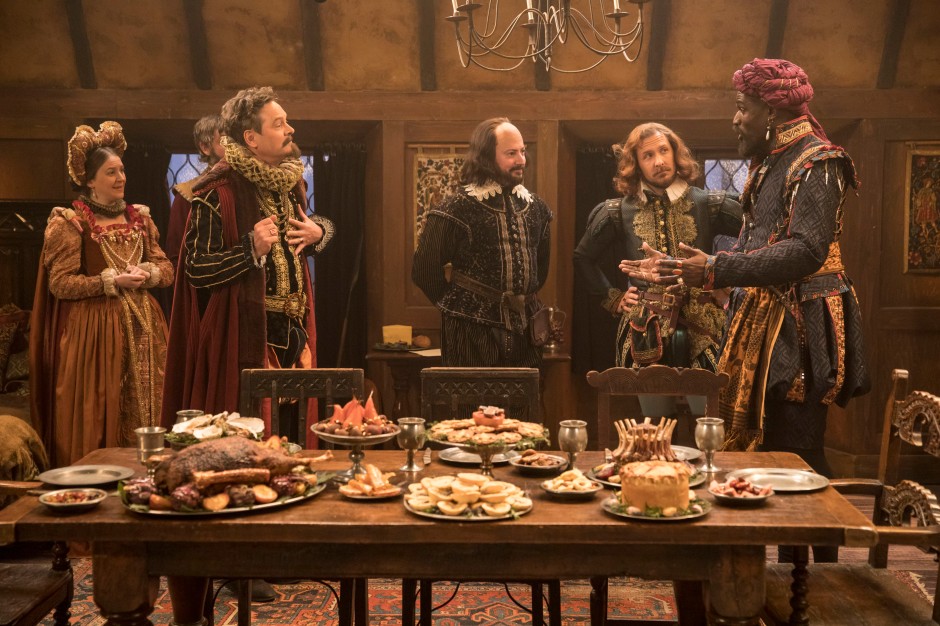 Upstart Crow is possibly the most gag-packed sitcom currently on British TV, with jokes flying so thick and fast that if you aren’t too keen on one, it’s no bother because another one will be along in just a few seconds. In a recent interview with The Independent, David Mitchell accurately described the scripts as being “very stupid and very intelligent by turns”. Indeed, what other show could in one half-hour episode offer wry commentary on topics such as fame and whitewashing (“Christ himself hailed from Judea and yet as everybody knows, he was blonde with blue eyes”) all while having a handkerchief repeatedly referred to as a “bogiewipe”? Special credit in the opening episode must go to Mark Heap for delivering his dialogue as if he’s some sort of pantomime villain, to Gemma Whelan for continuing to make Kate so charming and likeable, and to the line “like the narcissistic contortionist, I’ve buggered myself”. 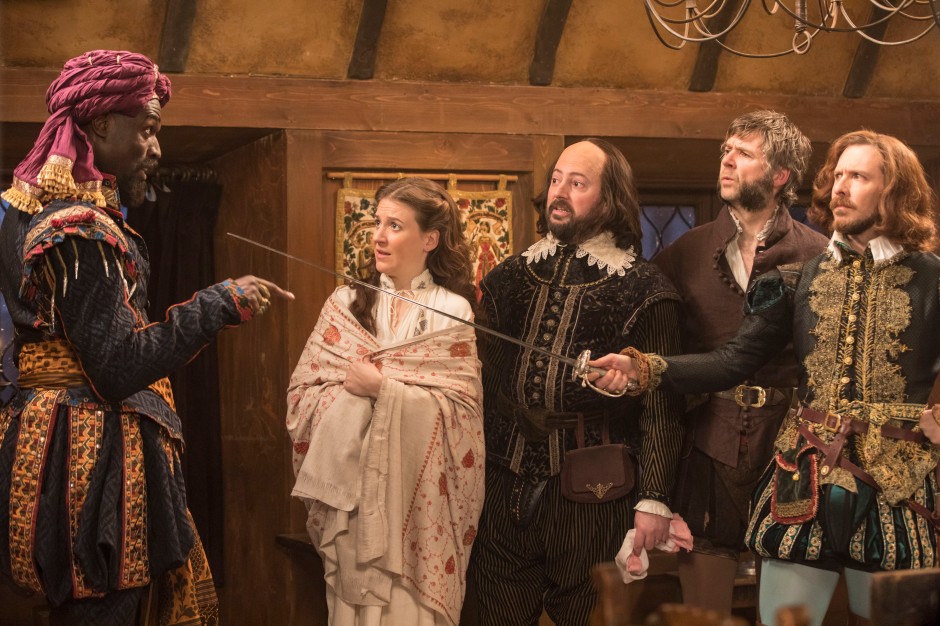 As well as Othello, the new series features plots loosely based on The Taming of the Shrew, with plenty of jokes at the expense of its ridiculously misogynistic premise, and The Two Gentlemen of Verona, as Kate and Marlowe (Tim Downie) fall in love, or rather lust, with each other so she follows him on a foreign trip disguised as a boy. This particular episode includes two of my favourite lines of the series – one about “digging up Richard III” and one about a “copious codpiece”. Meanwhile another episode sees Shakespeare unknowingly welcome a practising Catholic into his home (a crime punishable by death) which has a great mix-up involving a prostitute and a noblewoman, and he also teams up with songwriter Thomas Morley (Noel Fielding) to create a ‘greatest hits musical’, no doubt based on Ben Elton’s own experience of writing We Will Rock You. Playing Morley as a self-centred rocker who claims to “only want to make music, man” despite evidence to the contrary, Noel’s guest turn is a memorable one.

Although its first series aired on Mondays at 10pm last year, Upstart Crow returns for its second series at the earlier time of 8.30pm, in the post-University Challenge timeslot. Here’s hoping this will help it find an even bigger audience, as the show manages to have broad appeal without sacrificing intellect and can be enjoyed by Shakespeare lovers, haters and novices alike.