The Windsors is currently charming audiences every Wednesday night on Channel 4, as the soap-style sitcom about the royal family is back for a second series. With a number of TVO regulars in front of and behind the camera, we thought it was high time we spoke to some of them about the show. 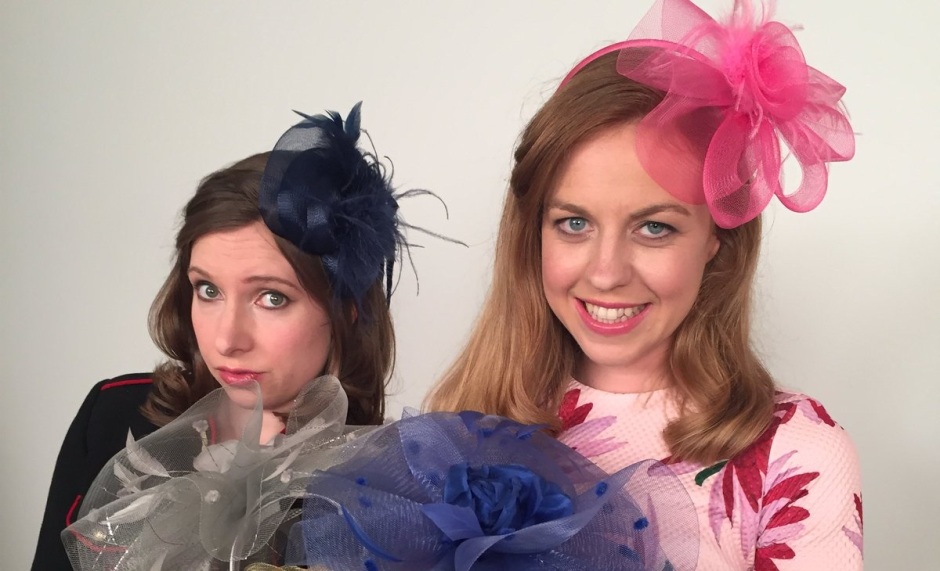 Hi Ellie & Celeste! The Windsors is back for a second series. What’s new this year?

Celeste: Well the show takes a semi-fictional approach to what’s happening in the world, so you can expect a new, American love-interest for Harry and some familiar politicians having run-ins with the Royals.

Ellie: More of the same for Eugenie and Beatrice. They seem to spend most of their time trying to make up jobs for themselves – doing motivational speeches in Port Talbot Steel works for example – or fighting over unsuitable men – in this series, Justin Trudeau.

There’s been a really diverse range of critical and audience response to the show. Has that played into the second series for you all?

Celeste: I guess we’ve all felt a little bit more confident having been somewhat buoyed by the response – but no more than that really.

Ellie: I think you can’t really let anyone dictate what you do. I guess just continue doing what you think is funny and hope people agree. 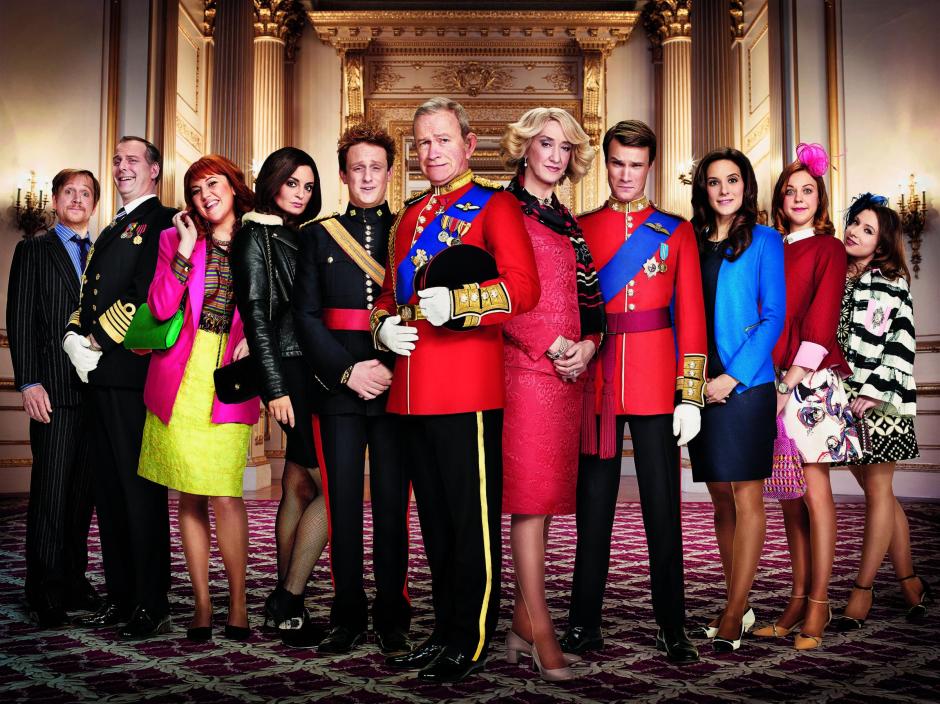 You play Princesses Beatrice and Eugenie, who are perhaps less well known than most of the other characters in real life. How do you go about making them so memorable?

Celeste: Well I can’t speak for Ellie, but for me I’d say my version of Eugenie is more modelled on the folks in ‘Made in Chelsea’ than it is the real-life Eugenie: the Chelsea lot are excellent models for rich, stupid, frivolous types.

Ellie: I mainly just try and pastiche most of the people I went to university with.

A lot of what your characters did in the first series was independent of the main plots, and yet the Princesses were an integral part of what made the show so funny. Are you more directly involved with everyone this year?

Ellie: We like to keep ourselves to ourselves. It’s better that way.

Celeste: I think the writers have been careful not to over-do it and stay true to what worked before. Part of what drives Beatrice and Eugenie is their desire to be more involved and accepted within the core of the royal family, so, I guess we can’t be too central else what would we be striving for? 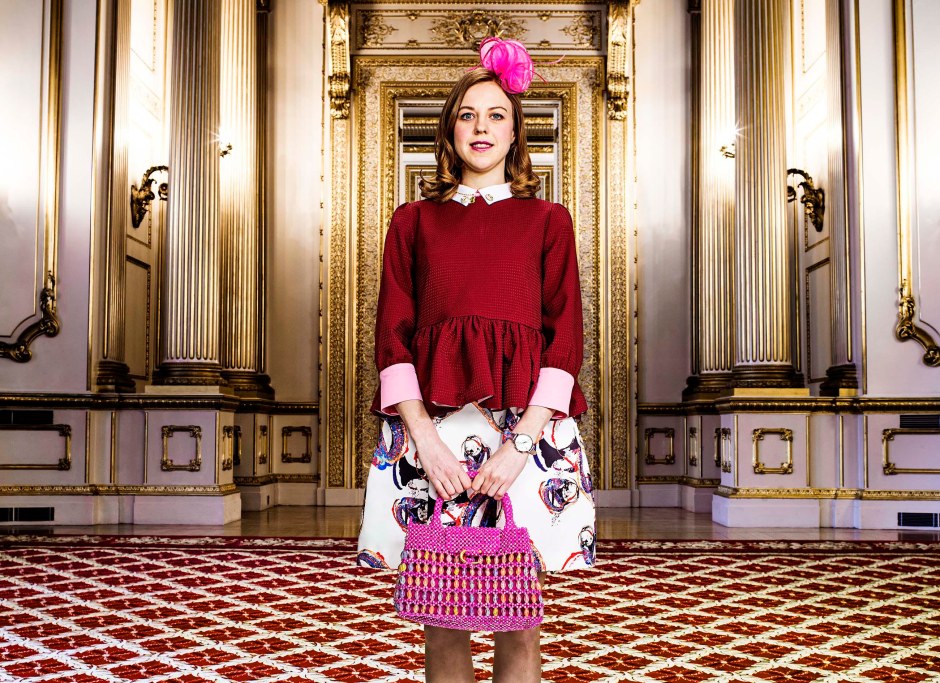 You spend a lot of your time with TVO royalty Katy Wix, and I know Ellie has recently finished a West End run with her too. What’s it like working with her so closely?

Ellie: She is the funniest woman on the planet, so naturally it’s a dream.

Celeste: Katy is an absolutely mad joy. She is so funny and so unique. I don’t know what magic made her and I hope it never wears off.

How much of what ends up on screen is on the page? Do you get much chance to ad-lib or refine scenes together on set?

Celeste: Not massively – the scripts are pretty lean and strong (like a good horse) so they don’t need much additional stuff. Plus the turn-around time for shooting is incredibly tight so we have to get right to it.

Ellie: We don’t get much rehearsal time so a lot has to be done on set. It’s mainly scripted but the odd ad-lib gets in. 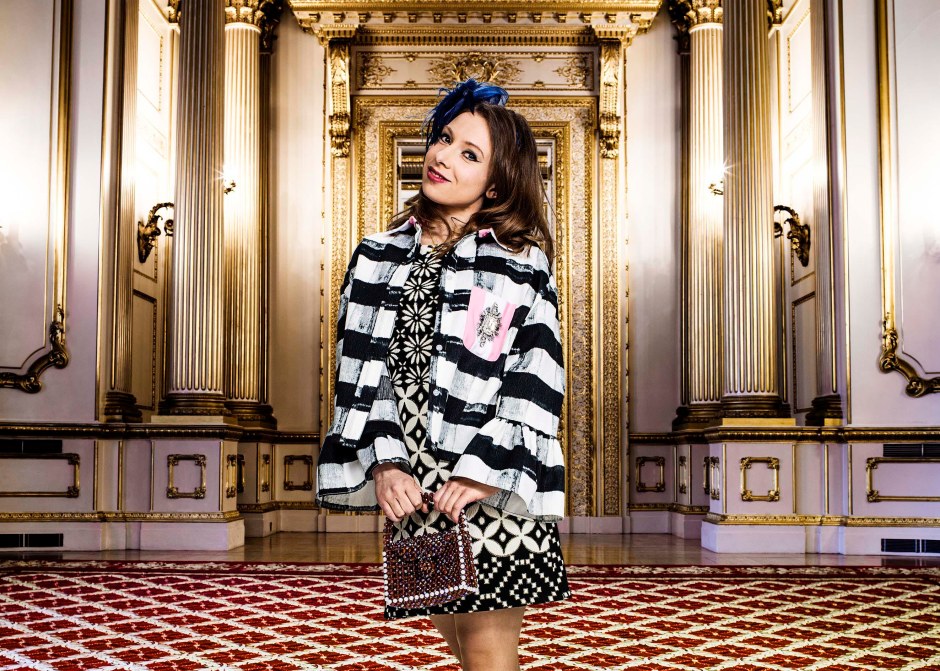 Is there a particular sequence from this series that stands out for you?

Celeste: Ellie and I fight over a boy in one episode which was a lot of fun to shoot. I got to do a hand-stand, by which I mean two of the crew had to raise my legs into position because I couldn’t do it. It felt very much like how a royal would expect to do a handstand.

Ellie: And I cried with laughter watching Fergie trying to get off with Justin Trudeau. Just the way Katy Wix spins on a chair. Unreal.

The show’s pulled together a genuinely impressive cast all round, some of whom I know that Ellie had worked with on previous projects. Was there anyone in particular you were very excited to work with?

Celeste: I love everyone but I suppose I am a quiet super-fan of Haydn [Gwynne, who plays Camilla – Ed.]. The woman has amazing craft and is just so compelling to watch – those eyes!

Ellie: Genuinely everyone is a dream. Everyone is extremely funny and extremely lovely. I was very excited to work with Vicki Pepperdine. She’s now my mother. 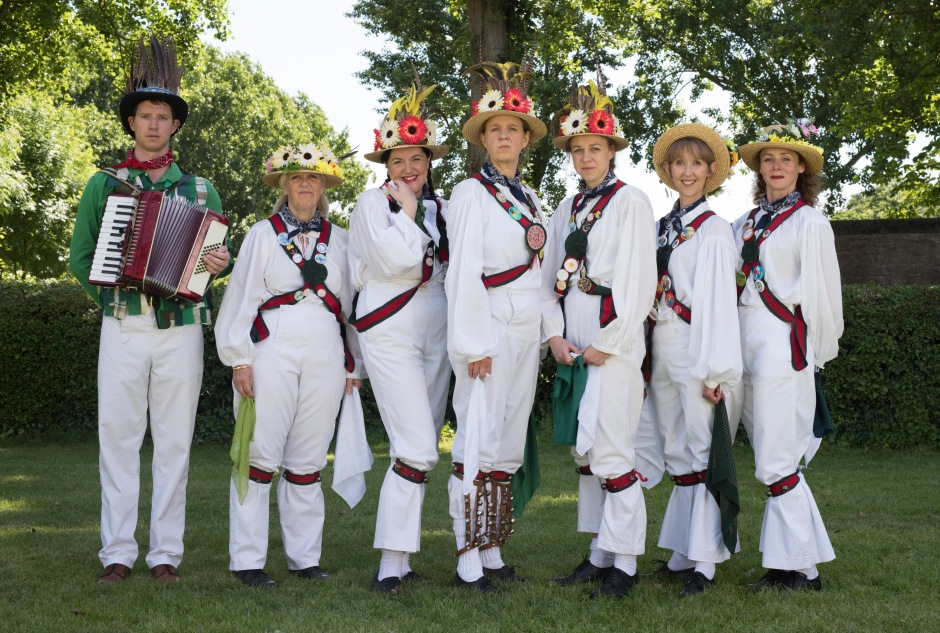 Yes, you’ve recently worked with Vicki on a short for Sky One, featuring Katy Wix too. Did that come about because of The Windsors and is there more collaboration in the pipeline?

Ellie: I’ve always thought that Vicki was extremely funny and also looked a bit like she could be my mum, so when I met her doing the Christmas special I asked if she wanted to develop something together and fortunately she did. She’s amazing and I love working with her so hopefully there will be more in the future.

Director Adam Miller is no stranger to us, either, thanks to his previous work on Mongrels and Katy Brand’s Big Ass Show. Does having a comedy director experienced in heightened parody help the process?

Ellie: Adam is so fantastic and has such a vision for the show. It’s interesting to see how things end up on the screen in the end because on the day they are completely different. It’s cut and edited so well.

Celeste: Yeah for sure. Adam’s very precise and creative – he really wrings as much out of a scene as possible so there’s not a beat missed. 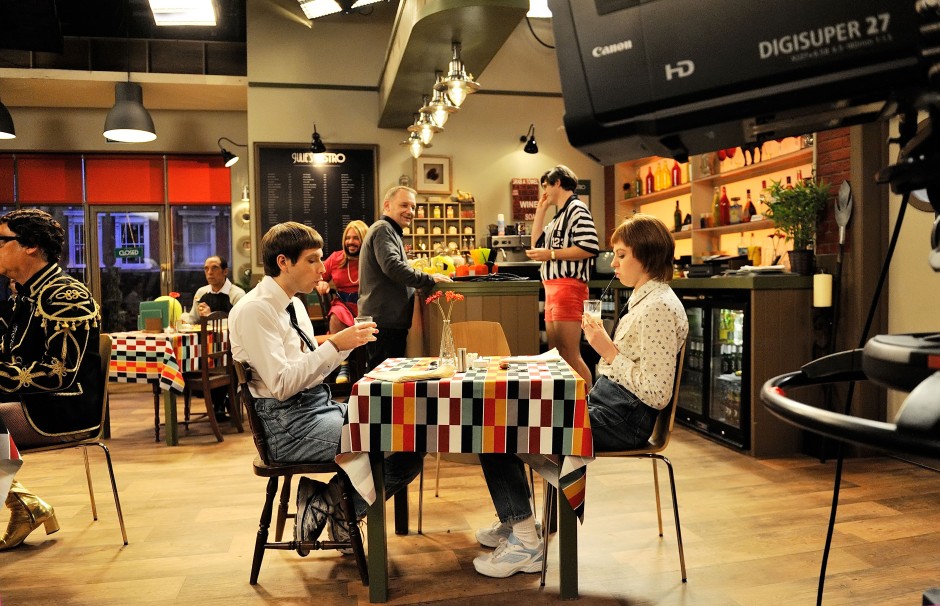 Of course, Ellie: you’ve been part of another royal family for the last few years now: namely The Velvet Onion! We’ve been covering your work since we met you on House of Fools back in 2014, and since then you’ve constantly been on our radar and worked with a large number of your fellow regulars. Do you feel part of the comedic family we write about?

Ellie: It’s a privilege! It’s so lovely! I like them better than my real family.

And Celeste, you’re a little bit newer to our screens than Ellie, but a lot of what you’ve been involved in so far has been a bit Oniony – Sun Trap, Year Friends and Morgana Robinson’s The Agency. Are you keen to pursue working mostly within comedy?

Celeste: Yeah – that’s where I’m at now and I’m enjoying making my own work and stuff. My private dream would actually be to be in a gritty Shane Meadows film ha – but I don’t expect that’s on the horizon any time soon… Unless he’s a big fan of The Windsors which surely he is? 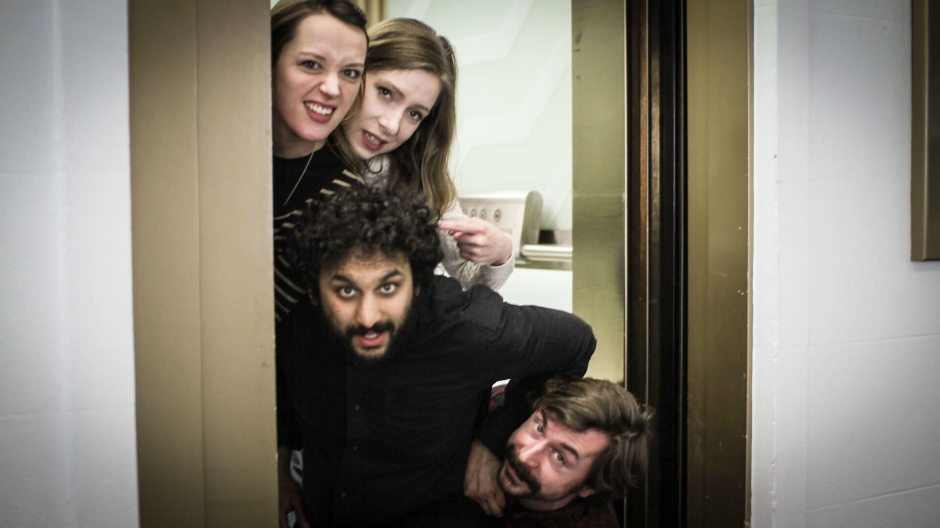 You’re both part of a brand new wave of alternative comedy, with your own regular double acts too. For anyone who hasn’t seen your live work, or shows you’ve written, how would you best describe them to the uninitiated?

Celeste: There is no question I am worse at answering than how I would describe my own work, but here goes… It’s loosely sketch / character comedy – increasingly though we’re moving towards stuff that’s less definable in terms of its form – i.e. what it can be labelled as. I’ve been told tonally it’s every day and surreal at the same time. If that’s not too vague / pretentious?… I’ll see myself out.

Ellie: I work with Natasia Demetriou, who is one of the funniest people on earth. We try and make characters that make us laugh, that I guess are a mix of people we see around and the slightly odder and weirder nature of our senses of humour. 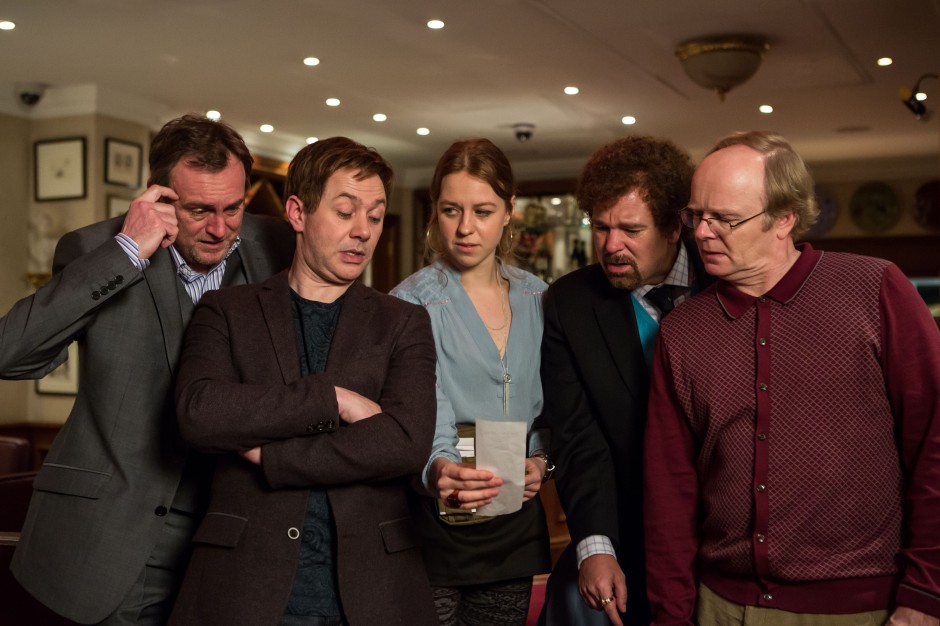 Ellie White in Inside No 9 © BBC / Sophie Mutevelian

Comedy has a track record of the old guard passing down the baton: have you found that older comics are supportive of your work so far?

Ellie: So so supportive. Every established person I’ve worked with has been nothing but interested and supportive of me as a comedic actor. That’s so important I think because it’s such a hard industry and it feels lovely to have people helping you along the way when they genuinely believe in you.

Celeste: Yes definitely. I think there’s this idea that comedy is hyper-competitive but that hasn’t been my experience. Everyone is very encouraging and supportive: although the comedy landscape has changed so much that I think we are all just trying to keep up. 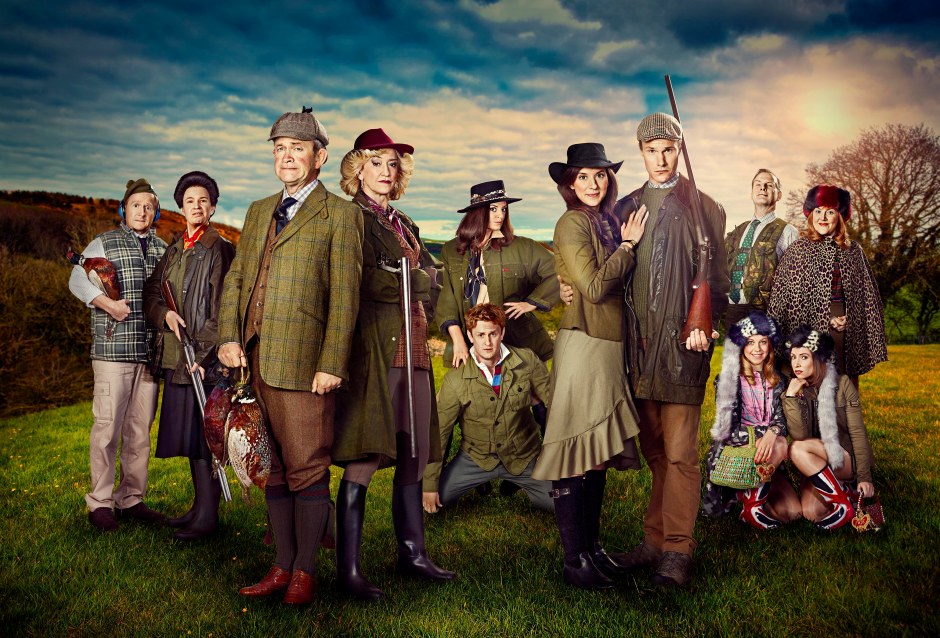 It’s been a tough decade for British comedy, with so few shows getting a deserved second series. It must be gratifying to be returning for more with The Windsors?

Ellie: It’s lovely! More shows should be given second chances. It’s so hard to prove yourself in 6 episodes. Things grow over time. Comedy needs to be nurtured!

If there’s a third run, where would you like to take the princesses?

Celeste: Well obviously the princesses are so hard-working and prolific that there is little that they haven’t done but, as they have a keen eye for fashion, it would be fun to take them to London Fashion Week, or see them trying to design their own range.

Ellie: I’d love more love interests. Just so we can cast people we fancy as our boyfriends. 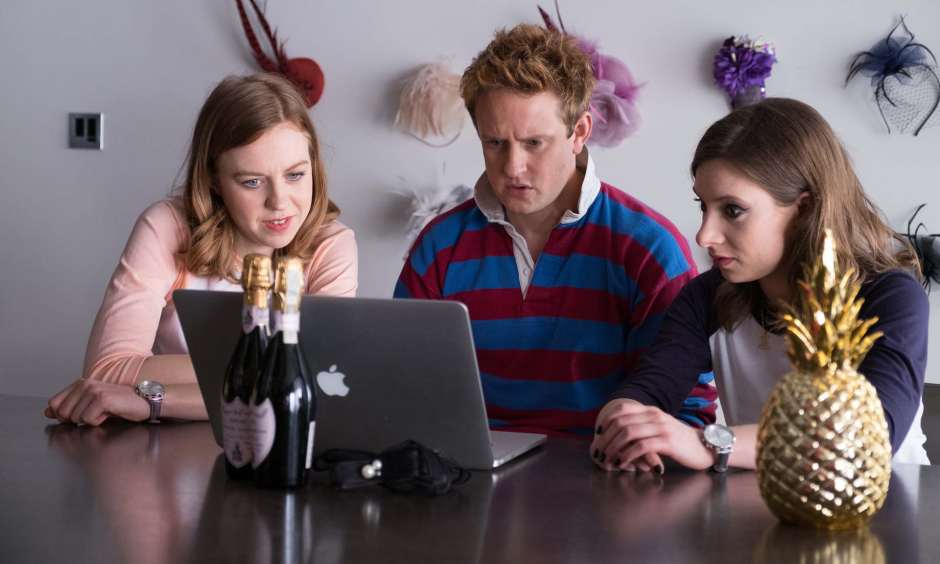 And beyond the series, what’s next for you both?

Celeste: Well right now it’s lunch, and then after that I’m working on a series for Radio 4 with my double act partner, Freya Parker, that will be out in the autumn. I am also writing on / being in a second series of Tom Rosenthal’s Absolutely Fine – a little web series for Comedy Central.

Ellie: I’ve got a few things in the pipeline which are exciting, but mainly writing and development and lying face down on my sofa.

Thanks to Ellie and Celeste for answering our questions. Catch The Windsors on Wednesdays at 10pm on Channel 4, and catch-up via All4 now.