Jonny and the Baptists are joining forces with Josie Long and Grace Petrie on a two week tour of the nation.

Entitled Leftie Scum, the tour welcomes audiences of all political persuasion, but if you are a Tory, they will most probably take the piss out of you. After all, for all their glowing Guardian reviews, the three acts have been dismissed by The Telegraph in their time: Long was asked to stop grumbling, while Jonny and the Baptists were called ‘distasteful’ and Petrie was ‘whining’.

The tour takes in ten dates from 29th October to 9th November, and tickets are on sale now via the links below. 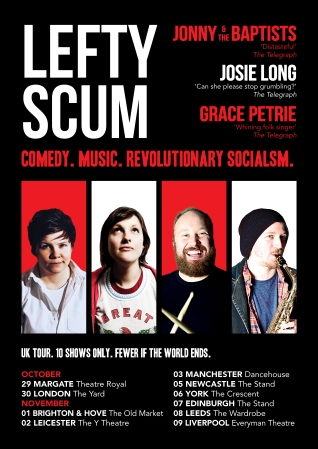 If you’re missing your Jonny and the Baptists fix until then, you can check out their discography on Bandcamp, or grab tickets to see them at the Edinburgh Fringe for a limited run this summer.