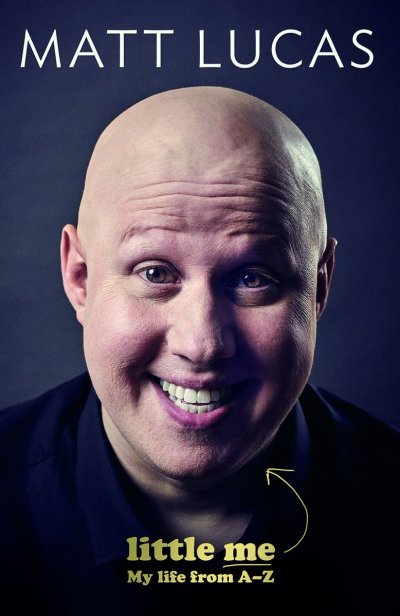 This October sees the publication of Matt Lucas‘ memoirs, and he’ll be celebrating the release with a date at the splendid Brighton Dome.

The comedian, actor and let’s not forget, comedy producer too, has taken the various aspects of his life so far and put them into alphabetical order for the book, which is being described as “hilarious, heart-warming and tear-jerking”.

The book’s blurb sums it up better than we can right now, so we’ll let Matt’s disembodied voice do the talking: “Throughout this book I talk about my life and work, including Little Britain, Come Fly With Me, Bridesmaids, Les Miserables, Alice In Wonderland and, of course, Shooting Stars. The thing is, this is a bit different to most memoirs you may have read, because it comes in the form of an A-Z. For instance, B is for Baldy! – which is what people used to shout at me in the playground (not much fun), G is for Gay (because I’m an actual real life gay) and T is for the TARDIS (because I’m a companion in Doctor Who now). You get the sort of thing. Anyway I hope you buy it at least twice. Thank you.”

The book is published on 3rd October, and can be pre-ordered now, but those of you who can get to Brighton on Friday 6th October should book tickets to the launch event at Brighton Dome now.

Little is currently known about the event, which will see Matt read from his memoirs, but tickets include a voucher to get the book for the bargain price of £13.50 (it’s currently £20 on Amazon). And you get to see the lovely gent in the flesh, which is nice, innit?

Tickets can be booked now, and this is likely to sell out fast, so get in while you can. In the meantime, Matt is currently still appearing in Doctor Who every Saturday on BBC One. You can see the trailer for the next episode below.