Unless you’ve been living under a rock, you’ll be aware that Mindhorn, the new film from Julian Barratt and Simon Farnaby, has just started its run in UK cinemas. Mog on our team had the pleasure of chatting to them earlier this week: 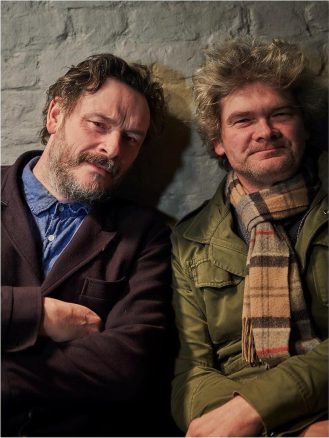 I wasn’t too sure what to expect of my time with Julian Barratt and Simon Farnaby. Although The Velvet Onion is seven years old (heck, how did that happen?), and they’ve always supported our endeavours with enthusiasm whenever we’ve seen them, the pair have somehow managed to elude our dictaphones during that time, bar a short filmed interview with Simon on the set of Luxury Comedy 2.  Perhaps some people are obviously happier being creative than they are talking about it?

I needn’t have worried; they were relaxed, friendly, polite and forthcoming; happy to answer questions, riffing off each other’s jokes and finishing off one another’s sentences. No silences, no awkwardness and absolutely no sense that they’re simply going through the motions of a PR obligation. They even promised to try to give us answers that they hadn’t given in other interviews. It was a pleasure and a privilege to have the opportunity to chat with them.

Washed-up Richard Thorncroft (Barratt) peaked with hit 1980s detective show Mindhorn, playing the titular Isle of Man sleuth with a robotic eye that allowed him to literally “see the truth”. Decades later, when a deranged Manx criminal, Melly (Russell Tovey), demands Mindhorn as his nemesis, Thorncroft returns to the scene of his greatest triumphs for one last chance to reignite his glory days, professional credibility and even romance with former co-star/paramour Patricia Deville (Essie Davis).

TVO: I’ve read somewhere that in Mindhorn you intentionally tried to reign in your natural propensity for the surreal. How did that work?

Julian: I wouldn’t say that – when you’re in the writing zone you try out possibilities. With this film it’s always been about what’s funny, what’s believable and where a character like this would go.

Simon: I would say, “Maybe we should make the police funny…is it like Anchorman where everyone’s funny, or is it that the police are real?” and Julian was going, “No the police have got to be real.” But then people would come along and say “You’ve given everyone boring parts!” so it’s been a really hard balancing act. But the police had to be real because, essentially, you’re putting this buffoon in the middle of The Bill.

J: I was thinking it was more like The Wire.

S: Yes, The Wire. Imagine Tom Selleck coming into The Wire, driving in his Fararri. (puts on his best Baltimore accent): “Who the fuck is this? Shiiiiiit.”

J: So it was two worlds colliding I suppose, two styles. We were aware we had to make it believable. Simon talked to a police man about it (the set up) and he said that if they had no leads, or the guy you’re looking for is obsessed with a TV celebrity, you might get someone in to do an impression of them. We had that in the film for a bit: Brydon doing an impression as an interim measure – because that’s what they really do, but then we didn’t have time for it. The police said they would do it as long as it wasn’t Rob Brydon.

S: When I mentioned Rob Brydon the police guy said “No, we would just ask John Nettles”. 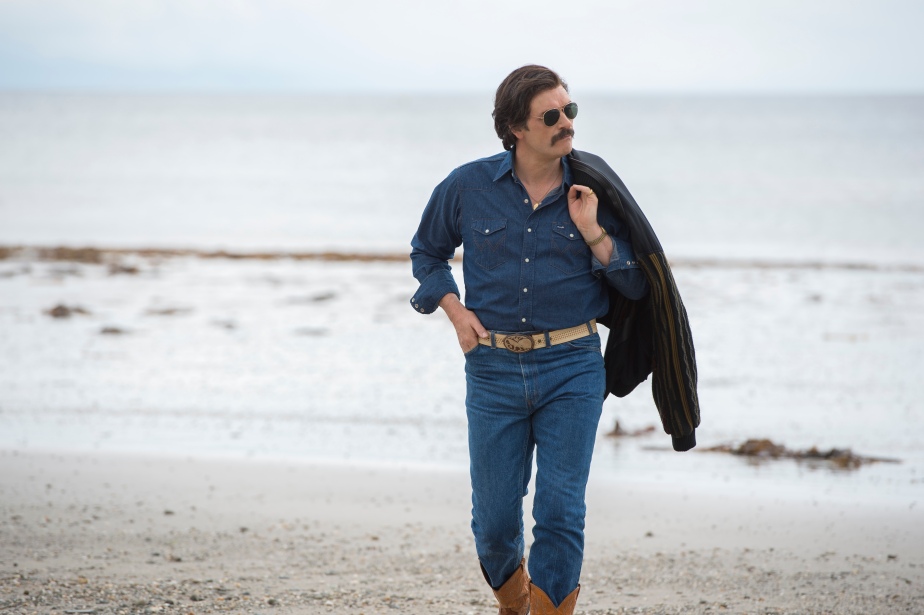 TVO: When we reviewed Mindhorn we talked about how many rich ideas it contained, compared with other films, i.e. Mindhorn the 1980’s detective show; Thorncroft the out of work actor; Melly the psychotic murderer. Did those layers evolve over time?

J: They didn’t come sequentially, they’re all part of the central idea. The crime is the germ of the idea, which allows you to have a fictional character, a modern day washed up character, and an obsessive character. It’s a single idea that has those three characters attached to it. In fact, it’s less of an idea and more of a molecule; it’s like a really powerful molecule.

S: The phonecall (in the police station) is the engine of it. In that phonecall you’ve got the mad man, you’ve got Mindhorn, and you’ve got Richard Thorncroft.  The last third of the film is powered by Melly, because he’s insane. We actually let loose a bit then and it does go slightly…not surreal, but… 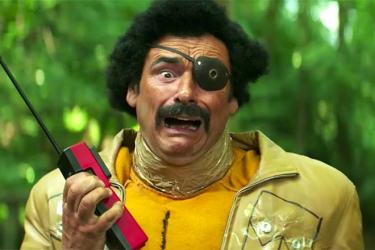 J: …it looks surreal from the outside, but we’re on the inside. We flip the view of what’s happened to Richard to the perspective of the TV people or his ex-wife. They just see a man who thinks he’s Mindhorn – they’re not privy to the stuff that we are, of how he’s become the character. It’s like dramatic irony – when the audience knows more than the characters.

TVO: On a project of this scale, do you have as much freedom to make your own choices – in areas like casting or location?

J: There is a financial aspect to it, unfortunately. If we wanted to keep complete control it would have had to be a much simpler, less complicated film. But as soon as money becomes involved you have to listen to other voices. The Isle of Man, for instance, was initially brought up because there was a tax incentive to film there and we were like (puts on luvvie voice): “This is no good, we don’t work like that. You don’t understand, we’re artists!” And then we looked at the footage of the place and thought it was actually better that where we had initially thought of, so it’s win/win.

It’s the same with actors; sometimes they’ll suggest people and you say, “I don’t know who they are, I don’t know them.” But then you talk to them and meet them, and you go “Actually they’re great!” My tendency is to go for people I know because I like working with people I know, and there’s always a risk you’ll get someone you won’t get on with. But if you do take that risk, sometimes it works even better.

S: We had Shaun (Foley, director) as well, and he has his own gang. He knew Ken Branagh and Richard McCabe, so he wanted to have a bit of his coterie.

J: Then you get your mates in to do other bits and pieces, like Tony Way.

TVO: The name Mindhorn has featured in a few different places: the Ralfe Band song Bruno Mindhorn, and as a character in the Boosh. What came first?

J: Oli Ralfe invented the name Bruno Mindhorn for a surrealistic piece that he made which we put in the Boosh radio show . Oli is the brain behind the name. We made it Bruce Mindhorn and made him a detective.

TVO: Tell us about ‘You can’t handcuff the wind’, the song from the film that’s being released as a single.

J: I’m most happy doing music, particularly in character – as someone like him (Mindhorn). I worked with my mate, Dave Westlake, who helped me produce it and make it sound good. Maybe they’ll add it onto the DVD as an extra…if they do DVDs any more. They should release it on Betamax. They’d have to release a massive Betamax player to go with it.

S: …which has to be delivered in a van.

J: Or in a forklift.

TVO: The Mindhorn TV series is set in the 1980s; what’s your best memory from that era?

S: I have a similar memory; I remember the lounge in our house in Darlington and being about nine. I’d seen some airplane disaster movies by accident and I’d become terrified of flying. And then Airplane! came on, and I think I thought it was another one, then of course it was a spoof. I didn’t even know you were allowed to do spoofs, so my head just exploded: “It’s like those films, but they’re undermining it!” And of course to took away my fear of airplanes. I nearly died laughing. I’ve probably got more vivid memories of watching TV than of my mum and dad.

J: Bergerac was your dad.

TVO: Imagine it’s the 1980s and you’re casting for Mindhorn, the TV show. Who would you want in the lead role?

J:  Someone like Oliver Tobias. He’s a very handsome sort of guy who was in lots of semi-erotic thrillers; a swashbuckling type. At the time Richard Thorncroft was more of a theatre actor, and he lucked out with this role.

S: He (Thorncroft) would have been passed over for Bond. He would have been up for Bond at some point and thinking, “Everyone’s talking about me as Bond.” Then he was offered the Mindhorn role.

J: And he would have said, “This is a more interesting role than Bond.” He would have made an excuse about why Bond would have been a straight jacket.

S: He will have told people that he turned down Bond to play Mindhorn.

S: In my garage

J: In a locked box.  That was a phrase we came across a lot actually, during the casting process. We were talking to people about certain actors, and they were saying, “Oh they can’t access comedy” or, “Yes, they can access comedy.” I don’t know if they had some sort of pass or a lanyard that would let them in.

Huge thanks to Julian and Simon for their time, and we wish them the best of luck with the film. Don’t forget that Mindhorn is now out in UK cinemas (check your local listings for details) and it will be available on Netflix from 12th May.