Our roving reporter, Mog, has been lucky enough to see Mindhorn twice. The first time she was so absorbed in the film she forgot to make any notes. That probably tells you all you need to know (about both the film and her). On the second run, she was able to remember why she was there; here’s her review:

Most films are constructed around a single creative premise – if you’re lucky. Sadly for the cinema-going public, special effects and A-list names are increasingly used in place of creative thinking. Then, at the other end of the scale there’s Mindhorn, by and starring Julian Barratt and Simon Farnaby. A film so rich in clever creative ideas, it’s sometimes hard to appreciate them all.

Mindhorn is built around, not one, but three creative set-ups – all of which are lightly tossed out within the first fifteen minutes of the film, as if its makers are saying “Oh these? Easy. There’s plenty more where these came from”, and any one of which would be strong enough to carry the film on its own. First up, there’s the pitch-perfect cheesy 1980’s TV detective show, with its bionically-sighted hero, Mindhorn (Julian Barratt), who can literally “see the truth”; then there’s the pompous, be-girdled washed up Mindhorn actor, Richard Thorncroft, who can now only get parts in commercials for orthopaedic socks; and finally there’s the delusional murderer (Russell Tovey) on the Isle of Man who believes that Mindhorn is a real detective and insists that he will only deal with him.

I could have happily watched any one of these narrative threads in isolation – and yet here we’re thoroughly spoiled with three, all deftly woven together into an original and entertaining story with a coherent narrative arc, underpinned by witty dialogue and very, very funny performances. Heck, even the cameos are excellent – Simon Callow’s luvvie turn deserves a special shout out. 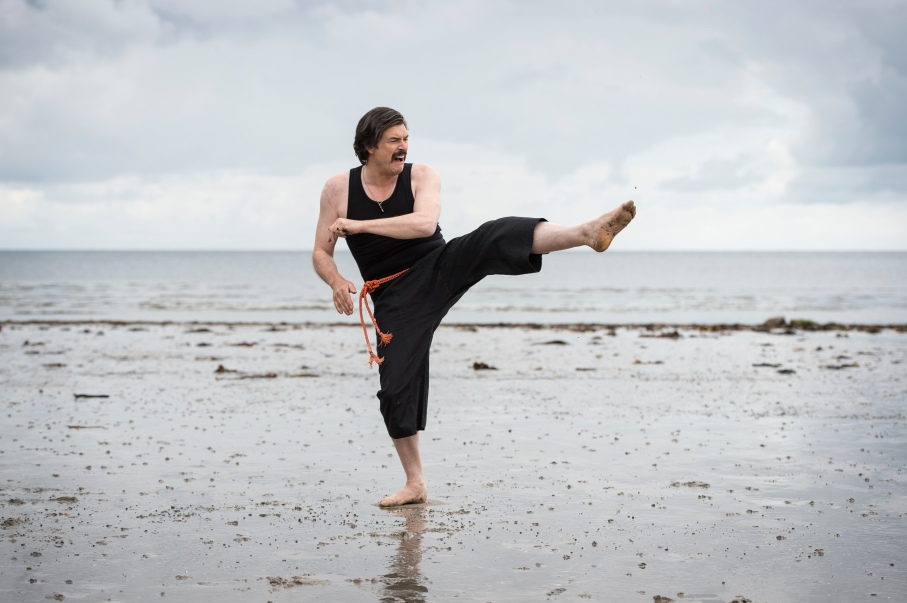 And yet there’s more! Looking behind the primary creative constructs, there are a wealth of wonderful scenes and set-ups to enjoy. From Thorncroft’s hilariously painfully audition with Kenneth Branagh, to a scene in the police station, when ‘Mindhorn’ misses an important phonecall with the killer thanks to his inflated ego and extreme pomposity (you can glimpse part of that sequence in the film trailer – the full scene is a masterclass in comic timing), or the wonderfully silly Isle of Man parade, which presents the perfect mash-up between a parochial lack of imagination and the utterly surreal.

And there’s still more… Within each of these scenes there are executional elements which raise the action from being merely funny and entertaining to being something much more clever and hilarious: the sparky, nuanced dialogue, the spot-on delivery, the era-perfect art direction…I mean, they’ve even managed to find a ‘love interest’ for Mindhorn/Thorncroft with the feline features and cheekbones you only ever saw on TV in the 1980s. People on TV today simply don’t look like that; and yet here is Essie Davis owning the look better than anyone of that era managed it. Kate O’Mara comes a close second. 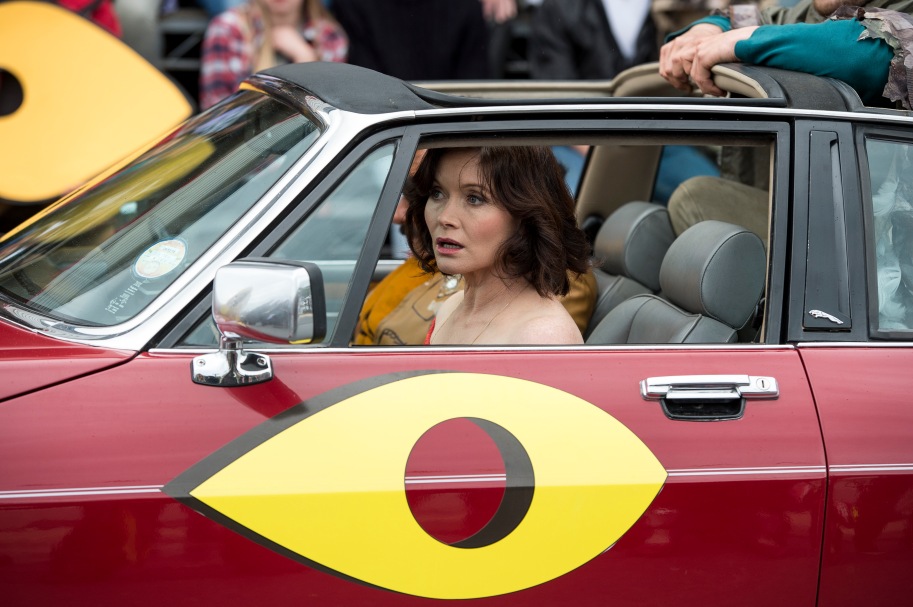 Indeed, if I had any complaint at all, it would be that there’s so much comic richness in this film, it’s almost impossible to take it all in – and when you try, you invariably miss something. Early in the film there’s a key scene between Thorncroft and his ex-stunt double, Clive (Simon Farnaby) – it’s an important exchange between two key characters; and yet because what they’re saying and how they’re behaving is so funny, and how they’re dressed is equally as hilarious, then – as if that wasn’t enough –  there’s even a set of truly inspired photographs on the wall behind Clive (of him wresting lions and fighting fires – pure genius, and which I suspect half of the audience will miss)….well, you get what I mean. Your mind feels as if it’s gorging itself – there’s a lot to take in, and it’s all so good you don’t want to miss any of it. Suffice to say, it’s a film that bears repeated viewings. 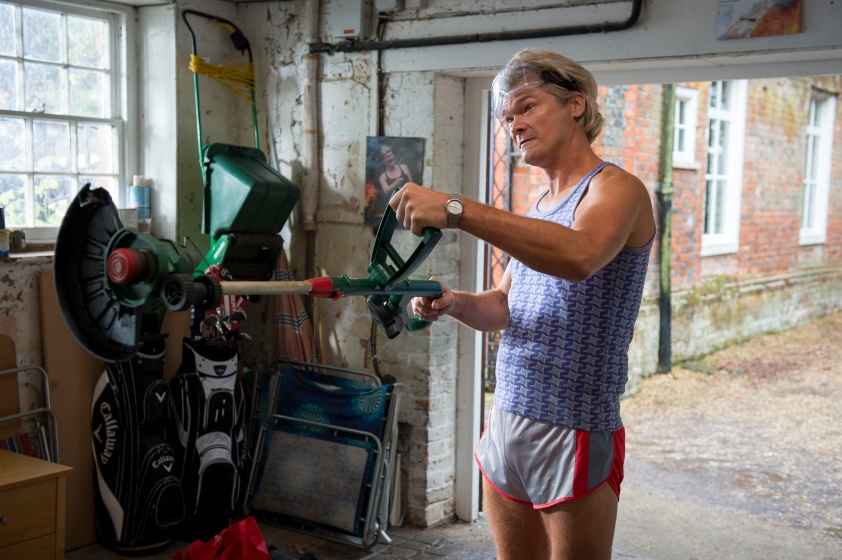 In interviews Julian and Simon have said that in Mindhorn they had to reign in their natural tendency towards the surreal.  Thankfully they didn’t exclude it completely; 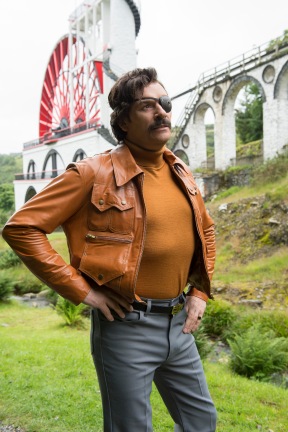 there’s enough fantastical oddballness in this film to ensure it will appeal as much to those who have discovered these artists’ work through the likes of The Boosh and Yonderland as it will to a more mainstream comedy audience, who will undoubtedly appreciate Mindhorn’s consistent comic solidity.

This weekend I saw the Mindhorn trailer at the cinema within an ad reel that featured wall-to-wall Marvel-esque blockbusters. What a contrast! There were no explosions, no dewily illuminated super-human skin tones and no popping primary colours. It didn’t make my ears hurt. Mindhorn looked and sounded like a very different cinematic beast from every other film being advertised. Thank goodness.

This film was ten years in the making, a stretch of time which can sometimes mean the death of the original speak of creativity that brought an idea to life in the first place. Here, that spark is alive and well – and by the look of it honed and sharpened by ten year’s worth of experience, experimentation and comedy wisdom.

We could all do with a bit of a laugh at the moment, so get yourself to a cinema come 5th May. Mindhorn doesn’t fail to deliver.

Mindhorn is on general release from 5th May; please check local cinema listings for details. International readers can see the film on Netflix from 12th May.