Murder in Successville is back on our screens next week, with a third series once more bringing Tom Davis back as uncompromising cop DI Sleet, alongside a whole new roster of celebrity rookie-cops to help him solve a crime.

But is the third series up to the high standards set by the two before it? Our editor Paul Holmes took a sneaky peek to find out…

Cards on the table. When Murder in Successville was announced, in the middle of BBC Three’s final death-throes as a ‘proper’ channel, did anyone seriously expect it to last three series? Heck, did anyone expect it to be more than a curiosity, tucked away at the end of a short but at times blisteringly brilliant lifespan for the station, soon to be consigned to the lower reaches of BBC iPlayer?

Yet somehow, the move online worked for BBC Three, and iPlayer was the gift that kept on giving, because freed from the shackles of a scheduled broadcast that had so often consigned great shows to the scrapheap in the past, Murder in Successville‘s audience grew and grew. Right now, both series are available to revisit on iPlayer, and time and time again in this Netflix generation, we’re seeing that making shows available long-term reaps rewards.

The biggest reward this time around is having six more episodes in which the one and only Tom Davis gets to ham it up as DI Ian Desmond Sleet – a gruff, uncompromising cop who loves nothing more than to shoot his gun and solve a crime in the process. The character feels so vital because, while the show naturally has a script it has to follow for the murder-mystery element to unfold, Davis’ impeccable comic timing and gift for ad-libbing allows him to react beautifully when his rookie guest stars take him by surprise, and even on those rare occasions when he’s lost for words, he manages to spin the result into comedy gold.

Each week, Sleet’s new partner has to solve the murder of a famous celebrity inhabitant of the fictional town, and the guilty party is one of three showbiz suspects. It’s a near perfect format that doesn’t need to be fixed, and yet the team have already begun to shake it about to see how it can work differently.

And so, in the first episode, we meet and spend time with the victim first – as TVO’s Ellie White makes a return to the show as the deliciously eccentric art-curator Bjork – before she falls into the arms of Richard Osman, who then has to set about finding her killer. Is it art teacher Hilary Clinton (a deliciously dead behind the eyes turn from Cariad Lloyd), tagged youth Zayn Malik, or creepy art dealer Arsène Wenger?

The format gets another shake in the second episode, as we travel back to Successville’s very first murder in Victorian England, and Martin Kemp is charged with solving the murder of local prostitute Rita Ora, which has been committed by one of three suspects: brothel owner Paloma Faith, science professor Will.i.am or top-notch toffs Jonathan Ross and Jamie Oliver (the latter played with lisping delight by Tony Way). 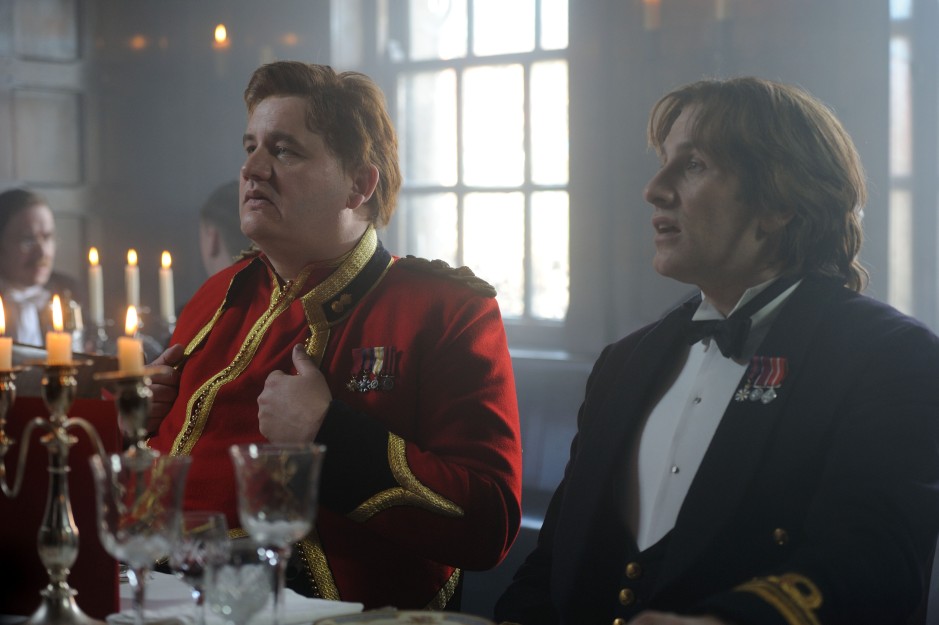 The proof is in the pudding, really: whatever the team do to twist the show into something slightly different, it will pay off… provided of course if the guest rookie is up for humiliation, because the cast will deliver it in buckets. Thus, Osman is forced down to his knees in front of a mostly naked Sleet to blow on his manhood, and Kemp is made to feel incredibly uncomfortable by a shouty Irish photographer who just won’t let him smile. As long as the guests are game, and the team prod and poke them into awkward situations, then the results are naturally entertaining.

And it’s not just them either – the supporting cast, which also includes Colin Hoult, Marie Lawrence, Terry Mynott, Kerry Howard, Jamie Demetriou and Luke Kempner are more determined than ever to make Tom Davis crack up, and they’re quite often successful. Director James De Frond has worked with this team across every series so far, and several cast members were previously involved in The Morgana Show with him too, so he knows what they’re capable of, and perhaps he is more than willing to let them work their magic so he can concentrate on making it look and sound good. 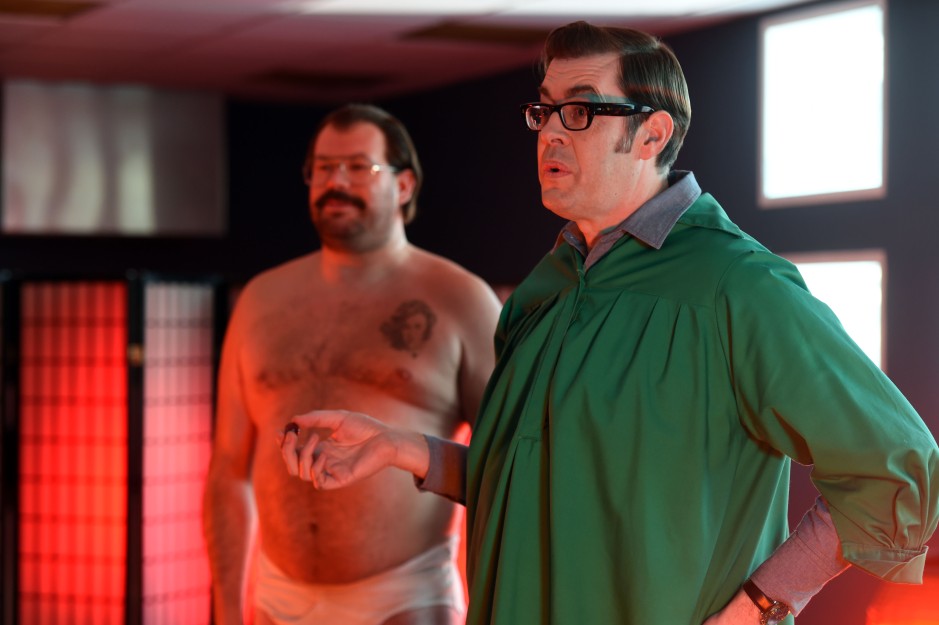 And it undoubtedly does, with De Frond working wonders to make every episode as visually arresting as possible, and Waen Shepherd‘s score another triumph for the comic turned composer. The trappings of detective shows are all in place, and this helps sell the illusion all the more, especially when the show veers into truly outlandish from time to time. To say much more would undoubtably give the game away – but suffice to say this is a show which rewards those who stick with it. The real Lorraine Kelly wielding a massive rifle is a sight we never thought we’d see; whilst Professor Green’s final showdown with the potential supervillains has to be seen to be believed. We’re going to be thinking about Nico Tatarowicz’s outfit in the second episode for quite some time. And Colin Hoult, who really should have his own award-winning sketch show by now, crops up in three roles across the series, and is increasingly brilliant with each successive turn. 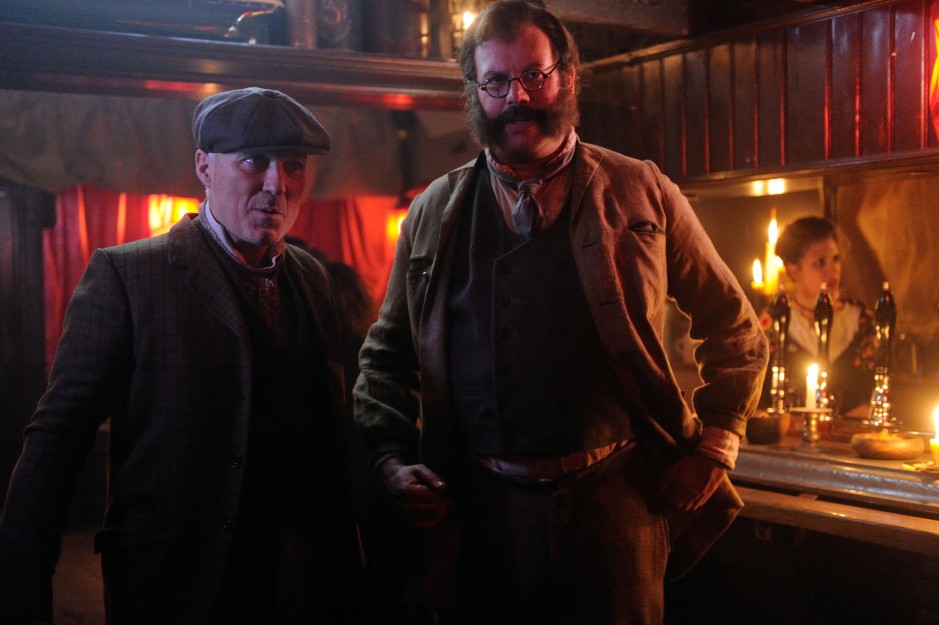 There is an argument, I suppose, that the show is self-indulgent at times, and the final episode is the worst offender on that front. While it has new material, it is, in essence, a glorified clips-show of highlights from the past few series, which feels like a let-down if only because the team pulled the same trick with the last episode of Series Two, and they’ve already shown they have more ideas in the bag this year. And the impressions of Successville’s various famous inhabitants, though always fun, can veer from incredibly on-point to wildly (and intentionally) inaccurate. While both approaches work, they sometimes fight against each other in tandem, and that might be a turn-off for a more casual audience who don’t quite ‘get it’.

But if you enjoyed the previous series, this third run offers more of the same, with a few sneaky surprises up its sleeve for good measure, and a whole load of laughs to enjoy. There’s something oddly final about the sixth episode, which suggests this might be the end of the road for Sleet. On the strength of this latest batch of cases, though, we’d love to see him solve some more crimes next year. Whaddya say, Beeb? Whaddya say?

Murder in Successville Series Three returns to BBC Three on 19th April. Series One and Two are available on iPlayer now.