Series 3 of Catastrophe, Sharon Horgan and Rob Delaney’s sitcom about a dysfunctional couple thrown together by an unplanned pregnancy, returns to our screens on Tuesday 28th February. 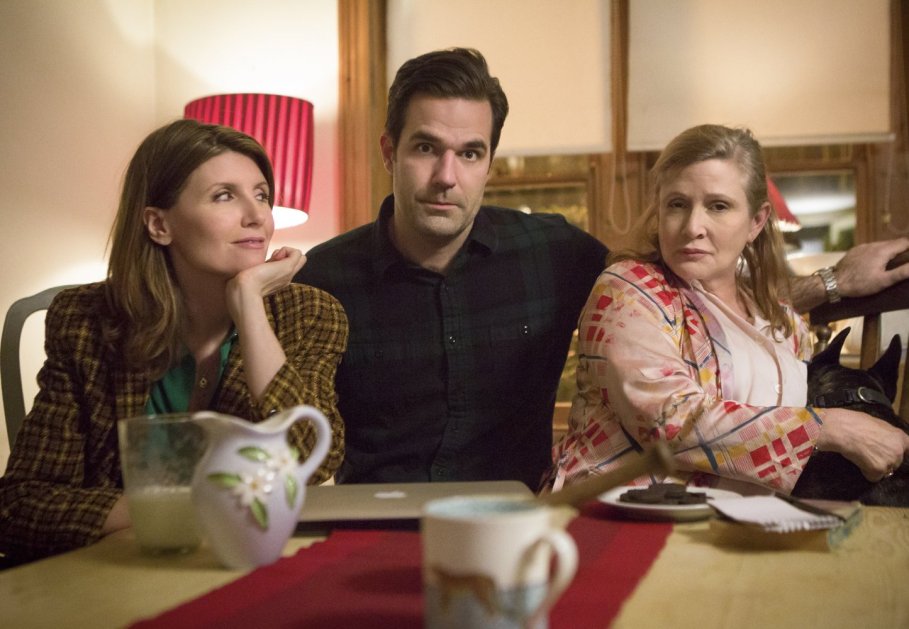 The first two series have been hugely successful, in terms of critical acclaim, awards quotas and viewing figures. Channel 4 obviously knows when it’s onto a good thing, so commissioned the new third series (and a possible fourth) while series two was still twinkling on our TV screens.

The late, great Carrie Fisher will be reprising her previous role as Rob’s acerbic mum in the new series. Earlier this year Sharon spoke warmly about their friendship which developed out of working together on the show, and has said of Fisher’s involvement in the latest episodes: “The first and second series, we didn’t have her for very long – she flew in and did her bit in about a day and a half. In Series 3, we wrote a bigger, chunkier part for her in Episode 6 and got to spend time with her, she was part of the gang. All of the cast got to spend time with her, we really feel privileged. She was funny all of the time – she was incredibly witty company.”

At the launch of the new series earlier this week, Rob said of the show: “We didn’t feel we had seen a marriage represented in a sitcom in a way that we found wholly satisfactory, so we wanted to make one. We wanted to show people who were real.”

“Sometimes we fully inhabit those classic sitcom roles of Rob being a dolt and she’s shrewish,” he continued, “But we also have all the other cards in the rainbow, just to make it real, then the laughs you get out of it are more earned, I think.”

To read the interview in full, in which he and Sharon talk about their love of poop gags and “chuckle fucking” (yes, it’s a thing), head on over here.

Episode 1 of the new 6-part series of Catastrophe kicks off on Channel 4 at 10pm on 28th February.