The Entire Universe, featuring Noel Fielding – with Eric Idle, Professor Brian Cox, Warwick Davis and Hannah Waddingham – tells the story of the birth of the universe in just one hour. Although social media is already buzzing with anticipation about the show, it airs on TV on 26th December. We were lucky enough to get an early peek; here’s Mog’s non-spoilery preview:

It’s not often that a Boosh officially joins forces with a Python (it’s only happened once before, if we recall correctly), so we’ve been getting rather excited about The Entire Universe for a wee while now. The  premise for the show is Professor Brian Cox attempting to present a serious scientific lecture whilst being continually interrupted by a glittering, giddy musical, which is being produced by Eric Idle for Rutland Weekend Television (comedy fans who harbour retro tastes will be familiar with Rutland Weekend Television, Eric Idle’s post-Python low-budget TV show from the mid-70s). Are you with me so far?

Part-science, part-panto, part-musical, The Entire Universe is probably best described as bonkers, not a term one uses lightly. It’s utterly unlike anything else out there, making it difficult to explain without spelling out exactly what it consists of, which would be poor manners just a few days before the big event. The show’s 9.30pm time slot suggests that it’s aimed at adults, but this is Christmas family entertainment through and through. I watched it with an 11 year old and a 13 year old, and it landed perfectly with them, while also keeping a supposed adult engrossed.

It has all the ingredients of classic early primetime Christmas entertainment shows from the 1970s (which is a good thing in my book): high-kicking musical numbers, daft jokes, guest stars in unexpected situations, and a side helping of gentle sauciness – underpinned with a healthy dollop of the unexplained/inexplicable, brought up to date with scientific interjections from the Prof.

The show does take a few minutes to warm up, however; Cox is a tad awkward to begin with, although he does find his groove (fair play to him, he’s an astrophysicist not a comedy actor), and the programme doesn’t seem able to make up its mind up whether it’s a live theatre performance or a TV show. But around the time Noel joins the action as second mate Higgs Boson, it suddenly finds its gear and thereafter merrily hurtles along.

Noel as the pivot point isn’t a view borne out of bias either; the youngsters who watched it with me both spontaneously decreed that the best bits were when he was in it, and they rarely agree on anything. The combination of Noel’s self-professed “easy manner”, his willingness not to take himself too seriously, and his finely-tuned funny bones lend themselves perfectly to this format, even when it feels a long way from the underground of cult comedy land. 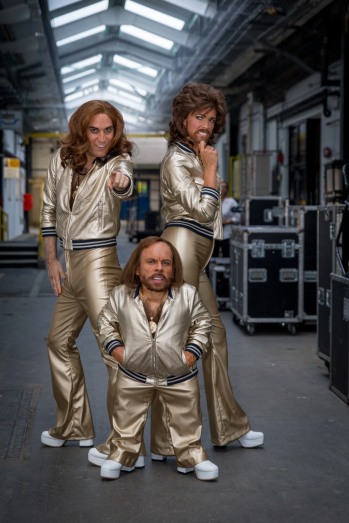 The links between the science and the musical interventions which punctuate it become increasingly free and easy; one suspects that Eric Idle naturally gravitates more towards silliness than astronomy, and the show is all the better for it. A pantomime pirate singing about the unlikely contents of a particle is one thing; gold lame’ed Bee Gees singing about gravity-free sex is quite another!

Cerebral this is not. But The Entire Universe is refreshingly un-self-conscious, and possesses a joyfulness that sweeps you up and takes you with it. The cast look to have had a lot of fun making it – and it’s infectious; there’s simply no space (if you’ll excuse the pun) for cynicism. It also carries within it a big beating heart of the surreal…with Eric Idle at the helm it was always going to really.

The result is a welcome, weird, and frequently wonderful juxtaposition between the world of strange and the shiny happy cues of prime time. A combination that nudges The Entire Universe nicely away from the mainstream.

You can see The Entire Universe at 9.30pm on BBC2 on 26th December (you can view the trailer below). To watch Noel and Brian Cox discussing the show click here, and to see some preview clips, head on over yonder.

.@EricIdle and @ProfBrianCox bring you the history of the universe. In one hour.