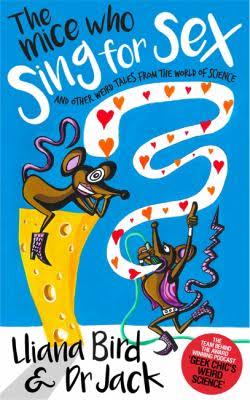 Some of you will be familiar with the Geek Chic podcasts by Lliana Bird and neuroscientist Dr Jack Lewis (if not, you can read all about it here). Well now the two of them have taken their oddball scientific stories concept and transferred it into book format.

The Mice Who Sing For Sex examines strange and surreal phenomena from the world of science, including heavy metal loving sharks, life-threatening skinny jeans, the impending jellyfish apocalypse and the singing sex-mice of the title. It’s packed with unusual facts about the absurd and a few giggles, all told by the Geek Chic team.

Beyond Birdy’s own Velvet Onion credentials via her appearances in Luxury Comedy and The Mighty Boosh, the book cover features artwork by Noel Fielding (illustration) and Dave Brown (design). So it’s only right and proper that we should be telling you about it.

It’s also been recommended by none other than Professor Brian Cox, who’s recently interacted with the TVO family via his and Noel’s involvement in Eric Idle’s Rutland Weekend Television Christmas Special. Of The Mice Who Sing For Sex the Prof has said: “This book is a wonderful wander down the more bizarre, surprising and sometimes shocking corridors of scientific research. My favourite must be the study which demonstrates that pre-trained goldfish can tell the difference between Bach’s “Toccata and Fugue in D minor” and Stravinsky’s “The Rite of Spring”, I have academic colleagues who can’t do that.” Praise indeed!

The book comes out next week on 6th October, but it’s available to pre-order in hardback (£12.99) or Kindle editions (£6.99). Go on, feed your brain with crazy weird wonder, and brighten up your book shelf with a Fielding/Brown front cover!