This week sees the BBC continue to celebrate classic comedy with a host of one-off specials, including a recreation of a long lost episode of 60s smash Till Death Us Do Part with Simon Day appearing as Alf Garnett.

TVO took a sneaky look at the special to see how it measures up. Here’s what we think… 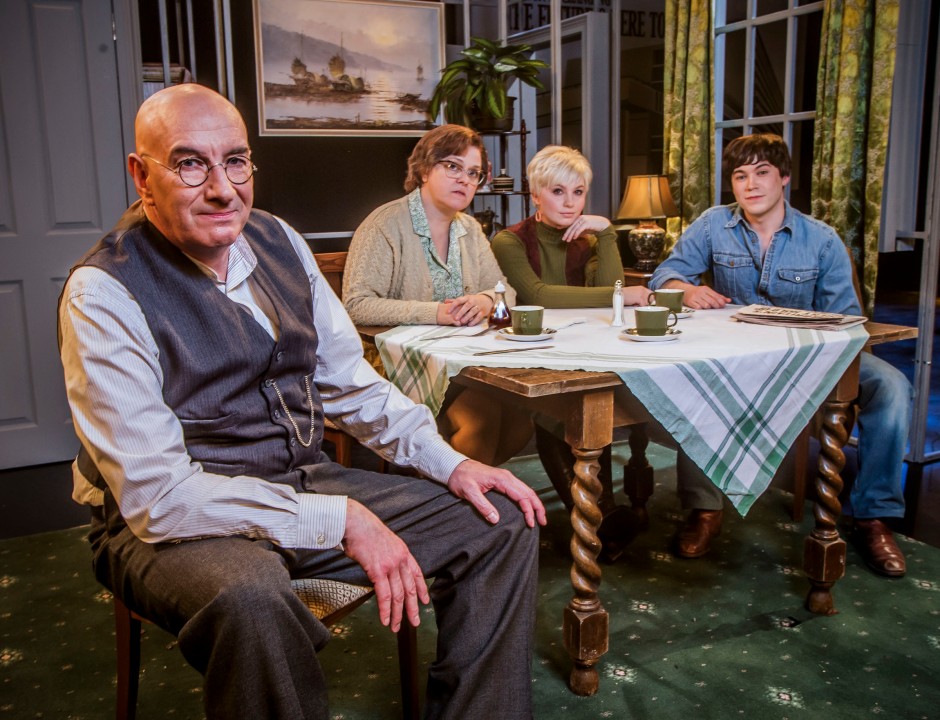 What can be said about the character of Alf Garnett, that hasn’t already filled dozens of academic textbooks, in-depth critique and a gazillion talking head panel shows with titles like I Love the Best Top 100 Greatest Characters Ever!?

Created by acclaimed scriptwriter Johnny Speight a solid decade into a writing career that had already clocked in work with Eric Sykes, Hattie Jacques and Spike Milligan, Alf – so perfectly brought to life by highly acclaimed thespian Warren Mitchell – first appeared on British television in 1965, and would keep on reappearing on screen until 1992.

The closest comparison one can make, perhaps, is with Alan Partridge, and even then – Steve Coogan’s creation has only appeared in about half as many hours of television, to a fraction of the audience. And perhaps, like Alan, Garnett works because in spite of his enormous flaws (including in Alf’s case a then groundbreaking level of un-closeted bigotry usually being made to look as immoral as it actually is), he’s someone the audience ultimately roots for. Perhaps they wouldn’t in 2016, but for almost three decades, he was a ratings winner.

And so, these are big boots to fill, and rather than come up with a new story for Alf, BBC 4 has turned its attention to a lost 1967 edition, and plonked Fast Show and Brian Pern star Simon Day in the lead role.

To his credit, Day works well with what he’s given: a sitcom script written almost 40 years ago, and without the groundwork of 13 previous editions, he and the rest of the cast just hit the ground rolling. Alongside Lizzie Roper (Dead Boss, This is Jinsy) as his long suffering wife Else, Syndey Rae White (Uncle, Starlings) as his put-upon daughter Rita, and Carl Au (Waterloo Road) as Rita’s wisecracking boyfriend Mike, Simon slips into the role with ease, which is no small feat considering the shadow of Warren Mitchell looms large in the memory.

The plot, for what its worth, is incredibly simple. Alf’s been working late, while Else and Rita have been up the pictures, and accidentally burnt his tea. Coming home with fish n chips, they find a petulant Alf unhappy about the lack of food in his belly, and expecting something to be done about it.

What follows is a series of unfortunate events for Garnett – who is seemingly too lazy to walk to the chip shop himself – primarily surrounding the phone box outside his house, which is Alf’s best shot at getting some skate before the chippy closes for the night.

Unfortunately, this outdated set-up works against the production, reminding audiences how much our day to day lives have changed in 40 years – and not just with the advent of mobile phones and, dare we say it, Just Eat and Deliveroo. This is hardly one of the series’ gems, and Alf, for all his bluster, is fighting a losing battle that, in this instance, doesn’t even feel remotely logical. There’s no part of his misfortune that he couldn’t have avoided himself, which inevitably makes him appear not just a spoilt oaf of a man, but an inherently unlikable and outright offensive one too. And in their taunting of Alf as they munch down on their chips, Else, Rita and Mike appear almost as unsympathetic, as if they’re only behaving that way to get Alf into another of his frequent and unwelcome rants.

That vibe is only accentuated by the production’s decision to present this ‘Lost Script’ on a barebones set: with wire-frame walls that further demonstrate the theatrical nature of proceedings. There’s a lot to be said for sticking so closely to the original script, and presumably following the original camera script as much as possible too: the results are a faithful recreation of what the BBC lost decades ago, and that’s a laudable approach  from director Ben Gosling Fuller (Ideal, Marley’s Ghosts, The IT Crowd). Sadly, in doing so, the outdated story, characters, and worst of all – the gags – are only made all the more obvious. Interestingly, the episode chosen doesn’t have any of Alf’s now infamous bigoted remarks in it, but he’s still a misogynist whose only comeuppance is being called a git, and maybe going hungry for an evening while his unfortunate family have a laugh at his expense.

In the end, if you’re a fan of the original Till Death Us Do Part and simply want to ‘see’ an episode you’ve long since been denied the opportunity to watch, then this special will tick all the right boxes. A strong cast deliver the material faithfully, and respectfully, and there’s certainly an argument for more of these scripts to be revisited in the future, in much the same way Radio 4 have been filling in the gaps in Hancock’s Half Hour and BBC Worldwide began (and sadly, stopped) animating missing episodes of Doctor Who to the original audio recordings.

But if you’re coming to this with fresh eyes, unaware of the legacy of Till Death… and the power of Alf Garnett at his peak, what you’ve got is arguably one of the weaker scripts in the series, brought back to life as an off-kilter curio that does neither the show, nor the highly talented performers, any real favours. A lost opportunity, perhaps – but as a gap-filler, this is a noble attempt at filling in a hole in the show’s chequered, but illustrious history.

Lost Sitcoms: Till Death Us Do Part airs on BBC 4 at 9pm on Thursday 1st September.