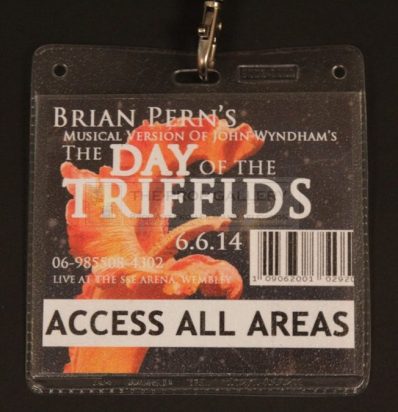 Fans of the show can get their hands on three items: (1) a Triffid drum skin, which was used in the second episode of series two, in which Pern presents his musical version of The Day of the Triffid – on sale for £295; (2) a full size Triffid cut-out (10 feet tall!) from the same stage performance – on sale for £995; and (3) a Triffid lanyard (pictured) – for £195.

All items are original props which were featured in the TV series and they can be purchased here.

It’s worth having a look around the rest of the site, to see what’s on offer. We poked around to see whether there were props available from any other TVO-connected shows, and spotted Bob Mortimer’s jacket from Randall & Hopkirk (Deceased). At a cost of £995, however, you’ll need to have some spare cash burning a hole in your pocket for that one.