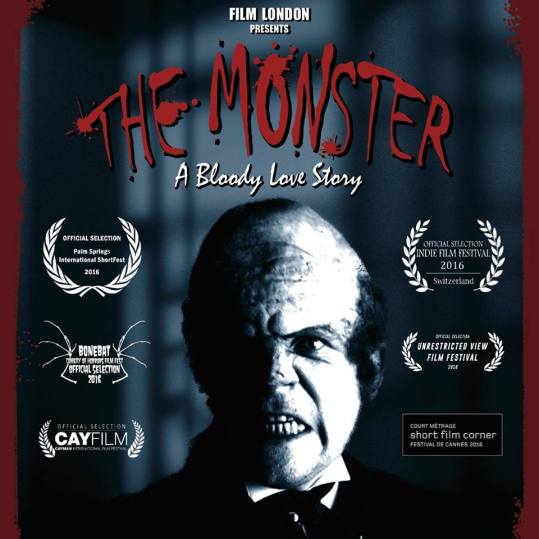 We’re delighted to report that The Monster, the short film starring Richard Glover, which is directed by Bob Pipe, produced by James Wren and scored by Waen Sheperd, has been garnering plenty of positive coverage recently.

The comedy horror about an iconic monster who falls in love with his leading lady features Richard in the role of the monster, alongside actors Helen George, Simon Cotton and Matt Slack.

Last week it was announced that the film had been nominated for a 2016 TIFA (Toronto International Film Award) for Best Short (you can see the full list of nominees here). It’s fantastic news – huge congratulations to the team!

From what we can tell (it’s a tad vague), the winners will be announced on TIFA’s Facebook page during w/c 19th August, and the following week on TIFA’s twitter stream. Until then, our fingers will be firmly crossed!

If you’d like to see The Monster yourself, it’s just been revealed that it’ll be screened during 2016’s Frightfest, the UK’s largest horror film festival; it will be part of the programme for the Short Film Showcase on the morning of Sunday 28th August. Details of the screening, which will be taking place at VUE Cinema West 12 Shepherds Bush Green, can be found here.

Our US readers can also see the film – as part of the Dark Comedy screening at HollyShorts on the evening of Wednesday 17th August. For details of and tickets for the event, which takes place at TCL Chinese 6 Theatres in Los Angeles, head on over there.

If we get any more updates about the film, including word of awards and further screenings, we’ll be sure to keep you posted. You can also follow The Monster on twitter and facebook.