The Velvet Onion is extremely saddened to report the death of Caroline Aherne who has lost her battle with cancer, aged 52.

Born in Ealing but raised in the Manchester district of Wythenshawe, Caroline Aherne’s breakthrough role was as the elderly chat-show host and agony aunt Mrs Merton – a character she developed with cult-comic Frank Sidebottom, first at Piccadilly Radio, then on Granada TV. As part of a new wave of alternative comedians, she began working with the likes of Steve Coogan and Reeves & Mortimer, before finding international acclaim as a regular cast member on smash-hit sketch show The Fast Show.

Living up to its name, The Fast Show was the brainchild of Paul Whitehouse and Charlie Higson, featured Simon Day, John Thomson, Mark Williams and Arabella Weir, and also provided a breakthrough opportunity for Rhys Thomas. Caroline’s gallery of memorable characters on the show included the Checkout Girl, Our Janine Carr, the Channel 9 weathergirl Poula Fisch, and henpecking wife Renée. 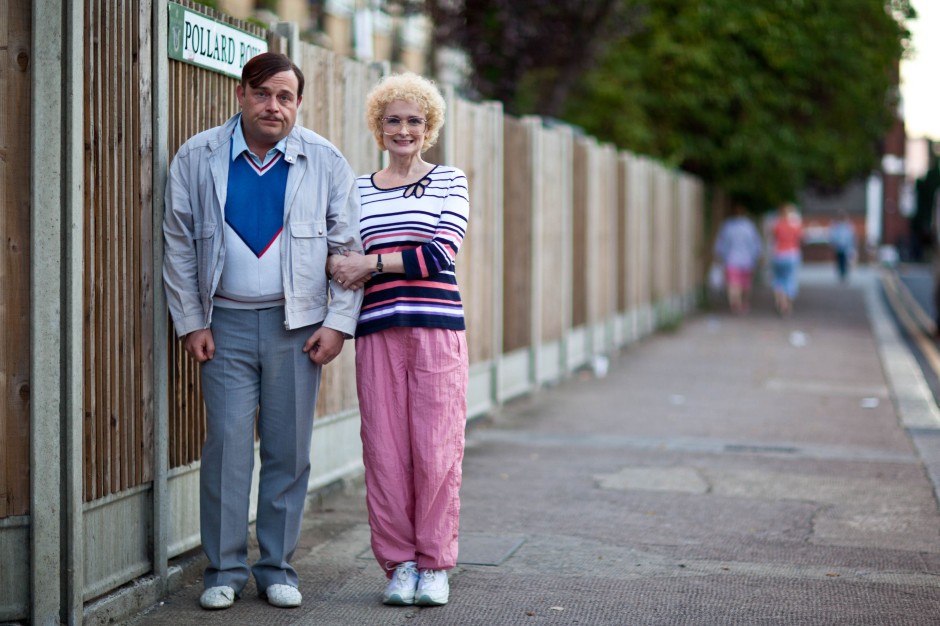 Aherne left the show at the end of the third series in 1997, and did not return for the final run of episodes three years later. However, she did make appearances alongside most of the original team (sans Mark Williams) and Lucy Montgomery in the Fosters Funny web revival of the show in 2011 and 2012, which were later broadcast as two specials by BBC Two in 2014.

Coinciding with her initial Fast Show fame, Caroline brought Mrs Merton to national television with five series of her chat-show The Mrs Merton Show, and a follow up series, Mrs Merton & Malcolm which also featured Steve Coogan as Terry Wogan. These shows saw Aherne team up with Craig Cash (recently behind Sky comedy Rovers), and together they went on to create smash-hit sitcom The Royle Family.

Defying the standard genre-expectations of the time, The Royle Family ushered in a new era for the sitcom – with a naturalistic setting and fully realised characters who were almost permanently sat on their sofa watching telly. The series made household names of Ricky Tomlinson, Sue Johnston and Ralf Little, and featured an early breakout role for Jessica Hynes (then Stevenson) as overweight neighbour Cheryl. The series grew in stature as it continued: Series One averaged 4.09 million viewers, but 11.29 million tuned in to the 2010 Christmas special.

Moving to Australia, Aherne wrote BBC sitcom Dossa and Joe which was filmed in Sydney but failed to find an audience. Upon her return to Britain, she began working on a new show with Craig Cash, but left the project which eventually became Early Doors. Retreating from the spotlight, Aherne wrote one-off dramas The Fattest Man in Britain (starring Timothy Spall) and The Security Men (starring Brendan O’Carroll and Bobby Ball).

Her 2012 appearances in The Fast Show web series became her final on-screen appearances to be heavily billed and promoted, though Caroline reunited with Craig Cash for two cameo appearances in his 2015 series After Hours starring Jaime Winston, Ardal O’Hanlon and John Thomson. Her inimitable voice could be still be heard – as Stephanie in CBBC animation Strange Hill High alongside Richard Ayoade, Doc Brown and once again, John Thomson – and as the narrator of Channel 4’s blockbuster show Gogglebox. Fittingly, Caroline’s replacement on the show while she underwent treatment for her illness was none other than Craig Cash.

Caroline Aherne made an enviable mark on the public consciousness, and her work across the 1990s remains an impeccable legacy of comedic gold. Whilst her retreat from the spotlight robbed the world of potentially dozens of fine new creations from this talented woman, the comedy world will never be the same without her. The Velvet Onion would like to extend our deepest sympathies to her family and friends, and as is customary with our obituaries, we’ll leave the final world with those we cover who worked with, and admired this wonderful lady. She will be missed.

Very sad to hear about Caroline Aherne, such a brilliant and ground breaking voice.

Love this Mrs.Merton interview with Bernard Manning where she calls him up on his racism. #CarolineAherneRIP https://t.co/qYdO4o8jJ9

I’ve lost a very good friend, we went back years.An irreplaceable comic genius.A joy to be and work with.The Renee to my Roy. RIP Caroline

Caroline Aherne moved television comedy on to a new place. Her extraordinary work will be cherished by future generations.

Came way too late to The Royal Family. Realised it was the source of the Nile for so much comedy I loved. RIP Caroline Aherne, you genius.

Rest in piece #CarolineAherne – her work on Mrs Merton and Royle Family was in a league of its own. Incredibly sad.

Very sad to hear of Caroline Aherne’s passing. Such a talented writer and performer. She could make you smile immediately. Such funny bones.

This is really shitty news. Such an immense talent, a really huge loss. https://t.co/KQbctp3YFs