The film carries the torch previously held by Steve Oram‘s Aaaaaaaah! and Gareth Tunley‘s The Ghoul, in that it includes a bevy of TVO-connected talent. This makes us very excited indeed. Brakes features Julian Barratt, Julia Davis, Noel Fielding, Steve Oram and Mercedes herself – alongside a whole host of other fantastic actors.

And if that wasn’t enough for you, another TVO face, Oliver Ralfe, plus the creator of Noel’s recent tour documentary, Joseph Lynn, have also been involved in the project on the production side.

We spoke to writer/director/actor, Mercedes, about the film:

TVO: Although it’s about as far from being a romcom as it’s possible to be, Brakes is ostensibly about relationships. Why did you choose this as your subject?

Mercedes: The phenomenon of falling in-and-out of love fascinates me: how a combination of seemingly unimportant details can converge on any random moment, and cause it to impact on our lives with such power. When we find ourselves caught up in this mysterious bubble, our emotional reality can become heightened to a level that seems so profound in its proportions: Here, suddenly, is an all-consuming everything, an entire world, yet at any time they can bust, and as mysteriously as they came into being, wink out of existence.

Where did the ideas for the different relationships come from?

I started thinking how many reasons are there to break-up, then I was toying with the idea that you could almost swap the circumstances around any relationship for another – but ultimately there is only one outcome when one or both of you wants out.

What made you reverse the order of the relationships, putting the break-up first?

I liked the idea of the relationships in reverse because in real life we only reflect afterwards. But would you really change things? I like the idea of shifting to retrospect, and it was interesting shooting backwards too. As we all knew the outcome, it was great doing the beginnings, everyone had empathy for “what they had been through” – well it seemed like that to me, and it was easy to find the funny.

When you were in the thick of it I guess it was difficult to know exactly what you would end up with. Now it’s finished, how do you feel about the end result?

It’s funny – in a way I didn’t know…but in a strange way I did, I just wasn’t sure how I was going to get there.  I was just aware that I needed to let the magic happen – I mean I went with the mistakes, if you like. So if we lost a location I trusted that something better would always come along  – which was both fun and scary.

How did you decide who to cast?

I’d been talking to Julia Davis about this idea for a while and she was very encouraging to get going. So we actually did a warm up ‘break up’ a good while ago, with her and Steve Oram – but the more I started thinking of stories, the more organic it became as to who suited who in the different stories.

Luckily a lot of my friends are amazing comedians, actors and improvisers and they all seemed to relate to the idea, as it’s such a universal subject. Julian and Oliver Maltman’s story was one of the first break ups we did. Kerry Fox, who I have admired for years and had just acted with in a TV show is great mates with Roland Gift, so we talked about them doing one.

Paul McGann and Kate Hardie I had known from a long time ago. I always loved their work, and just emailed and asked.

I’ve also used some less known actors who I think are just really brilliant and who I have worked with in the past.

My relationship was last, and Noel finally said, “You have to do yours – I’ll do it with you.” which was amazing. I was incredibly fortunate with casting.

Did the ideas for the stories come before you decided who to cast, or vice versa in some cases?

I knew the stories I wanted to tell so I knew who I wanted to cast for each one, and then we improvised around the stories or I merged them together. It was a very collaborative venture, so I would explain the idea to the actors, then we all talked about it  to see how it felt for them, and they could put in ideas too.

In most cases we met up and rehearsed/discussed it. There were a couple we filmed twice and I would email ideas to them . Then on the day we would just go for it, as I wanted a fresh ‘on the edge’ feel – of a break up, or a beginning. Like that heightened feeling you get during those times. We had three cameras going so we could stop and start; it was really fun.

I would suggest things, but everyone in the cast is amazing at improv, so we could stop and talk and I’d also let the camera roll a lot, like a play.

Was it difficult directing yourself?

Yes, but it was so brilliant; my partner in the film was Noel Fielding. We’ve known each other for so long and we work really well together, so I could relax with him enough to direct…and shout a lot!  That particular day was mental, there were snow storms  and the car broke down in Soho.  It was a blizzard, and the sound mic broke. Noel had to carry all the gear with the crew, in tiny shorts through the snow!

Getting Brakes made was a real labour of love for you. How did the lack of budget impact on the project?

Yes I had no money, and I really mean none, so it was really guerrilla film making. I never knew what camera operator or DOP were free that day, or even the actors sometimes! We used multi-media cameras so it has a punk feel to it. One day we got kicked out of the train station with Paul McGann and Kate Hardie, and moved on to Kings Cross with everyone really mucking in, including the editors!

Essentially, we relied on the good will and availability of the cast and crew, locations, editors and post production houses. We had to work with the schedules and constraints that come with asking for pro-bono support, so Brakes was filming for four years! 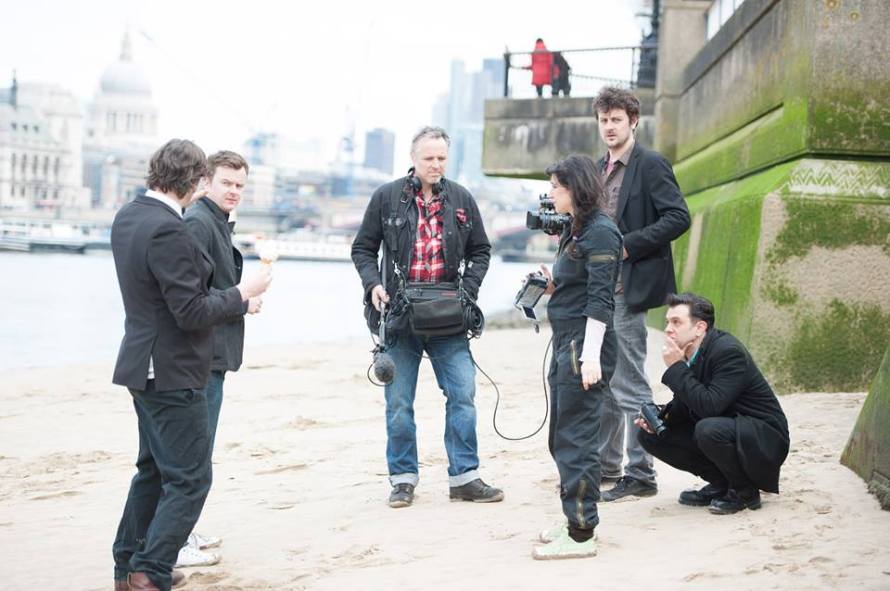 I wanted the audience to feel privy to a secret. I like the grainy look, and story-telling format advocated by film makers active or inspired by the Dogme 95 manifesto. We used mixed media, and we begged, borrowed and stole to make this film in the anarchic vein that falling in love can be.

How did it all come together in the end?

The BFI rescued us, for which I’m enormously grateful, and hopefully we have something else in the pipeline with them, which will also involve the producer, Judy Counihan.

The trailer has great music; is music an important element in the film?

Music is so important in the film, like it is in life – well it is for me. I knew I wanted a punky feel, like the film. And I knew I wanted to use friends (fortunately I have extremely talented friends!). I used a lot of one of my favourite bands: Quickspace! and the opening song is by Sybil. Then the brilliant Adrian Crowley, who I’ve known for years, sings the roof top scene, and the wonderful songstress Maija Sofia sang live in one of the scenes.

I wish there was more music in the film. I really found it hard doing the music actually as it’s not the sort of film where we could have music all the way through…although I am tempted to add more!

Which parts of it did you find easiest and most difficult?

I loved directing and working with the actors. It was really joyful…without sounding like a wuss.

Editing was really hard. I knew what I wanted and was in all of my edits with different editors; I must have driven them mad as we were shaping the film. We had such difficult materials to play with, due to my multi camera complex shoot. My editors want to kill me!

Our readers will be keen to see Brakes, because there are so many familiar faces are in it. Who else do you think will enjoy the film?

I hope that any open minded fucked up kind of person, navigating their way through relationships, will relate to it! Break ups are so very universal, even though it feels so unique and personal when it’s shaping you.

Although there aren’t any screenings of the film beyond Edinburgh planned yet, we’ll be sure to let you know as soon as any are set up.

Many thanks to Mercedes for her time and we wish her, and the cast and crew of Brakes the best of luck in Edinburgh!