Noel Fielding, Julian Barratt, and members of his family have donated postcard-sized artworks to raise money for the Card2Kendal appeal. 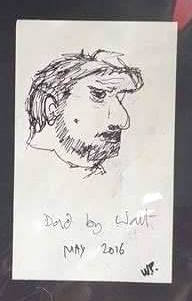 The postcards are part of a collection which includes artworks from a large number of artists (both amateur and well known), which will be sold to raise money to help Kendal’s recovery from devastating floods. More than 5,000 homes and hundreds of businesses and community buildings were flooded when rivers including the Kent in Kendal, the Eden in Appleby and Carlisle, and the Derwent in Keswick burst their banks. Kendal was the worst hit with more than 2,000 homes affected.

Anyone can donate their art; all you have to do is put your artwork on one side of a plain postcard, and send it to: Kendal Flood Relief Centre at Westmorland Shopping Centre, Stricklandgate, Kendal, LA9 4LR. But you’ll need to be quick – the gallery officially opens this weekend!

Organiser, Helen Pateman said, “People from across the UK have contributed in a huge range of media and styles from stained glass to embroidery, silk painting to mini oil canvases. There has been incredible support on social media.”

The cards are in the process of being posted on an online gallery on Facebook (more are being added, although the artworks above are up there already). From 11th June people will be able to reserve a card with a £10 minimum donation by commenting on their chosen piece. “Bids for celebrity work can also be entered using the same gallery.” said Helen. “There will be a reserve for each of these and if not met by 18th June they will go into an eBay auction. Payment secures the sale on or before the 18th in cash, or if by post by cheque made payable to Kings Food Bank, who will be receiving all proceeds from the sale.”

A live preview of all the work can be seen at K Village from 10am Saturday 11th June and the sale starts at 10am on June 18, ending at 4pm.

You can read more about the event here on its facebook page and there on its event page.