Doon Mackichan is one of several high profile female comic talents to be a ‘celebrity mentor’ at the forthcoming Funny Women Awards.

Here at The Velvet Onion, we don’t just believe women can be just as funny as men: we know it. Not counting behind the scenes talent or musicians, we directly cover the work of 100 actual, full blown comedians and comic actors as part of our portfolio of regulars, and while only 26 of those are female, they are all trailblazing talents who are shattering the myth that comedy is a man’s game, by being downright bloody brilliant.

So in an industry still very much dominated by men, we’re naturally very keen to shout out about the work of organisations such as Funny Women, founded by Lynne Parker in 2002 to help women find their voice through performing, writing and using humour in business and everyday life. They run comedy workshops, weekend events and conferences in London, Manchester, Brighton and Edinburgh on stand up, comedy writing, improvisation, sketch and character, as well as the Time of the Month scratch night to try out new comedy ideas. Generally, they’re just great at what they do: and it’s working. 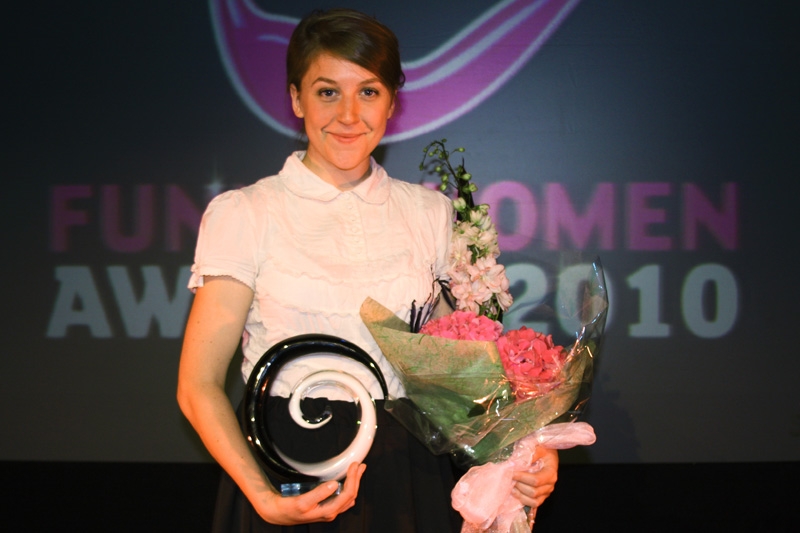 Since 2003, the organisation has held The Funny Women Awards – offering prizes to comedy writers, performers and short-film makers. Previous winners and nominees include the likes of Bridget Christie, Katherine Ryan, Andi Osho, Sarah Millican, and TVO regular Gemma Whelan. And this year, the finalists for the Stage Award category (best new comedy performer or performers), can look forward to receiving expert advice from a panel of top notch comic talent.

Doon Mackichan – start of Toast of London, The Day Today, Smack the Pony and countless other classics – is joined on the panel by longstanding friend of TVO Tiff Stevenson, as well as familiar faces Sara Pascoe, Zoe Lyons, Shazia Mirza and Ellie Taylor.

Speaking about the appointments, Doon was quoted as saying: “We are still, as women in comedy operated in a pretty medieval environment. One woman per panel show, one woman on a bill full of men, one female led sitcom for every ten male’s stories. Let the much needed tidal wave of comedy begin. Get on your surf boards ladies, I will see you on the beach!”

Quite right, too. The Stage Award winner will receive £2,000 prize money and industry support for career development, including two fully supported shows. Heats are being held up and down the country, and go through all the way to regional finals in July and August, with the final taking place on September 28th at KOKO, Camden, hosted by Kerry Godliman. If you’d like to take part, register before Wednesday 1st June over yonder.

The Funny Women Awards are sponsored by Benefit Cosmetics and are proud to support the national domestic violence charity Refuge.