Early last month we told you about the revival of Peterford Golf Club, this time as part of Radio 2’s Comedy Showcase. 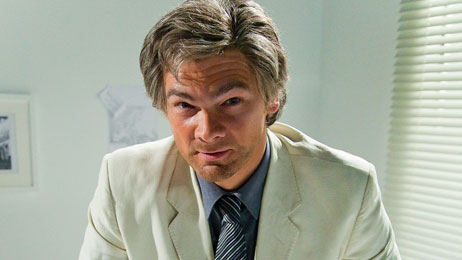 The show, now called The Peterford Golf Club) written by and starring Simon Farnaby, was broadcast at 10pm on Tuesday evening, with a repeat tomorrow at 10pm. It also starred Barunka O’Shaughnessy, Lucy Montgomery and Tom Meeten.

It is of course also available on BBC iPlayer.

Next weeks Comedy Showcase also has a few TVO connections. The King’s Men is written by Arthur Matthews alongside  Terry Mynott (Toast of London), who also stars in the show with Robert Webb.

The two main characters are policemen Ernest Ridley and Arthur Smyth. The lifelong friends are asked to join the new Secret Service in London, after discovering what they believed to be a German plot to invade The Isle of Sheppey.

Also in the cast are Katy Wix, Ellie White and Alex McQueen.

The show will be broadcast on Tuesday at 10pm on Radio 2  and is available now on BBC iPlayer.

There is another TVO connected Showcase available now and due to be broadcast on Wednesday. Ankle Tag stars Katy Wix and Ellis James as new parents whose lives are interrupted when his Dad appears unexpectedly, wanting to stay.