This evening sees the launch of the latest batch of Comedy Feeds on BBC iPlayer, and naturally, there are plenty of TVO links making the shows worth your attention.

Whilst none of these, sadly, have been migrated to a full series commission, the scheme has led to Impractical Jokers, People Just Do Nothing and Nick Helm’s Heavy Entertainment getting full runs on BBC Three, so our hopes are high for many of this year’s outings, which are as follows: 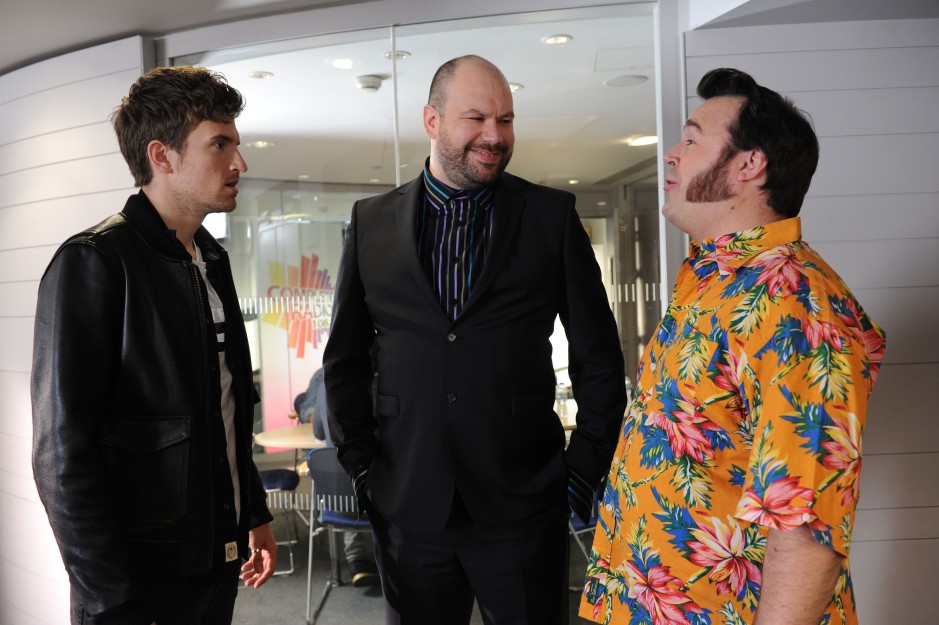 Radio 1 DJ Greg James makes his writing debut with this self-starring sitcom pilot, developed in collaboration with Mark Chappell & Shaun Pye (The Increasingly Poor Decisions of Todd Margaret, A Young Doctor’s Notebook). James stars as late-night commercial radio DJ Jake Cross, who is unexpectedly given the opportunity to inherit the coveted breakfast slot when the previous presenter dies on air.

With an idiotic best-friend (Richard David-Caine, Skins); a sleazy, do-anything-that-moves agent (Tom Davis); a neurotic producer (Olivia Poulet, The Thick of It) and a very enthusiastic fan (Nico Tatarowicz), Jake must battle his own ego, the whims of those around him, his affection for the breakfast show host’s widow (Montserrat Lombard, Ashes to Ashes), and the attention of his bitter rival (stand-up veteran Jared Christmas) to maintain his credibility in the face of selling out.

TVO connections extend behind the scenes too. The show is the first fruits from Cave Bear Productions, set up by Psychobitches producer Ben Cavey, whilst production duties fall to Arnold Widdowson (Crackanory, Sorry I’ve Got No Head). Both Widdowson and direct Simon Gibney have worked on Horrible Histories, and the score for the show comes from none other than Waen Shepherd. Get in. 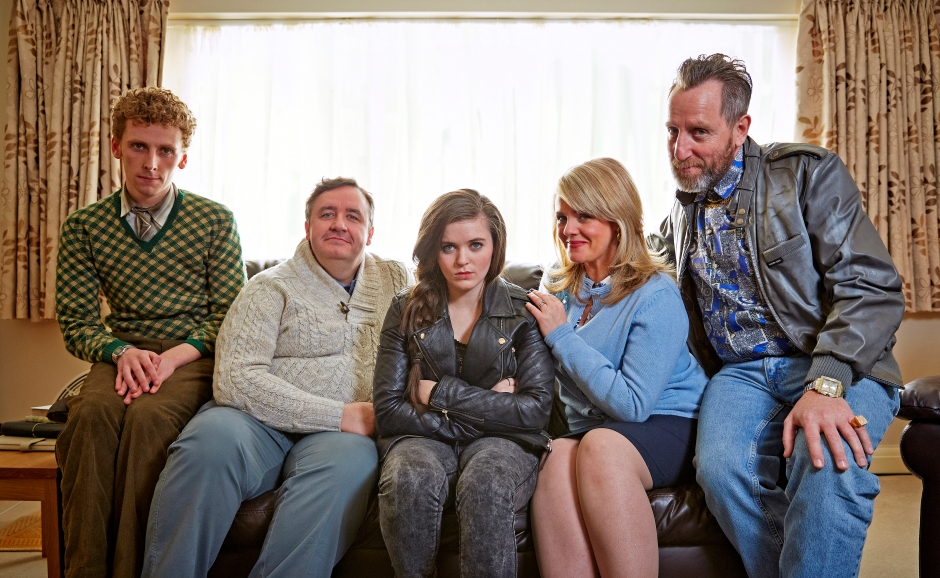 Fishbowl is a comedy from Bwark Productions about a university dropout who goes back to stay with her weird family.

Written by Andrew Mettam, who previously wrote for Scallywagga featuring Steve Edge, its producer is Rhianna Andrews in her first producing job following many years as a producer’s assistant and later associate producer on The Inbetweeners and its spin-off movies.

People Time is a character comedy sketch show written by and starring a ‘new wave’ (see how that’s catching on?) of Britain’s comedy writers and performers.

Many of these names will be familiar to those who follow the live circuit, but one in particular stands out for us: Ellie White of House of Fools fame.

Ellie, who played Erik’s deadpan girlfriend Rachel in the madcap sitcom’s second series earlier this year, will be joined by Jamie Demetriou (Sun Trap, Cockroaches, Bill).  Also on board is Jamie’s older sister, Natasha Demetriou, who previously wrote for E4’s The Midnight Beast and, like her brother, is a stand-up in her own right. The cast is rounded out by Liam Williams (Uncle), Claudia O’Doherty (The Inbetweeners 2), Alastair Roberts and Daran Johnson.

Ben Farrell (who previously worked on Toast of London before moving to the BBC) is executive producer on the project, with Andrew Gaynord directing and In and Out of the Kitchen‘s Sam Michell on producing duties.

Set in a pupil referral unit in Scotland, Radges stars Miranda‘s Sarah Hadland and a string of relative newcomers including Lois Chimimba, Lauren Lyle, Nick Preston, Samantha Foley and Ryan Paterson as the youngsters trying to negotiate being ‘weirdos’ in small town Scotland.

Written by stand-up comic Fern Brady and directed by Simon Hynd (Bob Servant), Radges is produced by Sam Bryant, whose previous successes on radio include I, Regress with Matt Berry, and Alice Lowe’s sublime Alice’s Wunderland.

Sunny D is a vehicle for stand-up comic Dane Baptiste, who writes and stars in the pilot as an exaggerated version of himself: he’s 29, ambitious, frustrated and very funny. Still living with his parents in a cramped box room he shares with his Mum’s cleaning equipment, he is desperate to follow his dream and break away from his privacy-free homelife and the boss he hates. And today could finally be the day when everything is about to change. 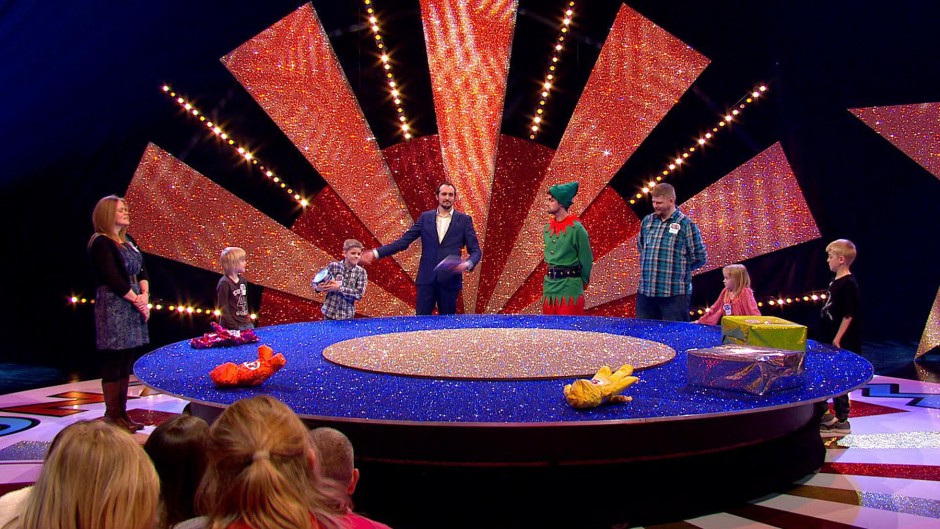 In a first for Comedy Feeds, Fun & Gamez is a family-friendly comedy game show. Written and hosted by comic Phil Ellis, the laughs are more important than the prizes as happy families join Phil and his gang in a series of simple but somewhat twisted games and challenges, all played out in front of the studio audience.

Ably assisted by Bonzo the Dog (Janice Connolly), Jim the Elf (Will Duggan) and the rather more unsavoury Uncle Mick (Manchester stand-up legend Mick Ferry), Phil surprises unsuspecting audience members and even treats one lucky family to a surprise holiday… but what will they have to go through to get there?

Interestingly, Fun & Gamez is produced by Lisa Clark, whose previous credits include House of Fools, Matt Berry Does…, Shooting Stars, Steve Coogan: The Inside Story, Catterick and Spaced. Directing the pilot is none other than John L Spencer, who is a veteran of Never Mind the Buzzcocks and was responsible for several episodes of seminal 90s comedy Fist of Fun, so its safe to say this one is worth the adults watching as much as the kids!

All six pilots will be available on iPlayer from this evening, and last year’s pilots are still available until the end of the week. To view them all, click here.