Set during the Napoleonic Wars in an alternate England where magic was once commonplace, the show focuses on two very different men who are drawn together by their talents in the art, and an ancient prophecy may just be their making, and their undoing.

TVO recently caught the first episode ahead of transmission, and to whet your appetites, there’s a spoiler-free preview peeling below.

Ten years is a long time in television, and it’s now over a decade since Doctor Who returned to our screens, bringing back with it not only the intrepid wandering in space and time, but also the notion that good quality, fantasy television could co-exist with game-shows, reality programming and chat-host ego trips in the realm of prime-time TV.

And whilst the boom in the industry has blossomed worldwide in the years since, production companies within the UK have generally struggled to find a genre show which would have a sizeable impact since Merlin, commissioned in the post-Who flurry, called it a day three years ago. For all it’s shared DNA with Doctor Who, Sherlock is hardly science-fiction and far removed from fantasy – beyond the notion of why the cleverest man in England elects to take a taxi everywhere in London when the Tube would be much faster.

The truth of the matter is this: expectations are high for Jonathan Strange & Mr Norrell. The push for the show to be a roaring success isn’t helped by the BBC’s previous wobbles in fantasy adaptations: Gormenghast, we’re looking at you in particular, here. The greatest cast in all the land can’t save a production that doesn’t get it right behind the scenes and on the page.

Which may be why the makers of Strange & Norrell, as we’ll call it for shorthand, are led by familiar names for fans of BBC Wales’ recent output. In the directing chair is Toby Haynes: who cut his teeth on Being Human and Spooks before heading up the five successive episodes that made up the end of Doctor Who‘s fifth series, it’s 2010 Christmas Special, and the start of it’s sixth ‘nu-Who’ run. Haynes was also responsible for probably the most talked about drama episode in the last five years, as he led Sherlock‘s titular detective to his apparent death in the sublime The Reichenbach Fall.

He’s not the only Who allumni on board, either, as the adaptation of Susanne Clarke’s novel comes from Peter Harness, writer of 2014’s Kill the Moon episode, and two further episodes to air later this year. Harness was also responsible for the underrated Frankie Howerd biopic, Rather You Than Me, starring David Walliams as the troubled comic, and his last adaptation of a popular novel turned out to be the Kenneth Branagh smash Wallander.

So far, so good, and collating a cast that includes Bertie Carvel (Les Mis, Sherlock), Eddie Marsan (God’s Pocket, The World’s End), Enzo Clienti (In the Loop, The Theory of Everything), Alice Englert (Beautiful Creatures) and Charlotte Riley (Edge of Tomorrow) was an impressive coup. Adding the ever sublime Marc Warren to that cast was the cherry on top, and by adding in Bunny and the Bull star Edward Hogg and the legendary Paul Kaye: Well, now you’ve really got our attention.

Hogg’s role is our way into the story: as John Segundus, he channels innocence and devotion to his cause, as a determined scholar of magic curious to find out why conventional practise of the art died out three centuries ago. Travelling to York to join a gentlemen’s society of magicians, he is instructed that magic can never be performed, only studied, until, that is, he discovers Mr Norrell.

Played with world-weary heart by the eternally impressive Eddie Marsan, Norrell is content to keep himself to himself and practise magic only when he needs to do so, but Segundas’ curious soul manages to persuade him to demonstrate his powers to a flustered society in a sequence which features CGI so impressive, it may finally blur the lines between what Hollywood does as standard and the Beeb can do with a little effort.

Then, as if by magic (sorry, couldn’t help that one), we’re taken out of this narrative, and introduced to the other half of our title: Jonathan Strange. A drifter and clear romancer, he is enthused with ‘posh-toff-charm’ yet for all his flaws, is immediately a likeable soul, thanks in no small part to the nuances of Bertie Carvel’s portrayal. Sure, he’s hopeless, hopping about on his perpetual holiday from responsibilities, but a brief look into his family life demonstrates whose side the audience is meant to be on, and when the inevitable plot-device to free him of his predicament arrives, things begin to look up for ol’ Jonny-boy. 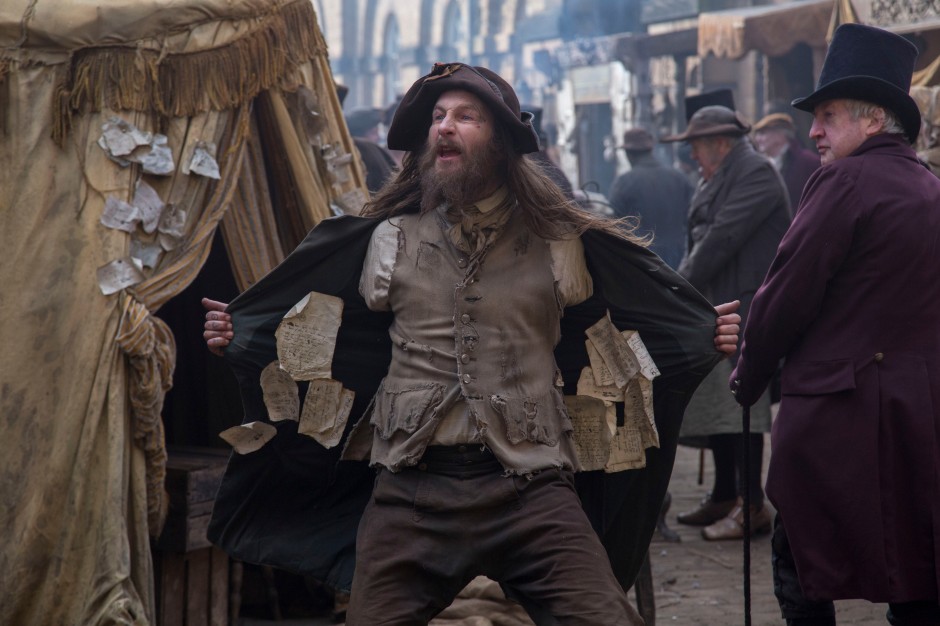 The connection between these two men is in the hands of a street magician, Vinculus, played by Paul Kaye with all his usual punk-rock gusto. He’s charming yet threatening, likeable yet disgusting at the same time, and Kaye has long since been a master of turning grubby little shits into characters you can’t help but root for.

Vinculus has received a prophecy concerning two magicians, and he approaches first Norrell, then later Strange, in his attempts to push the two together. The former has become embroiled in London’s high society, uneasy at his new-found fame after ‘The Miracle of York’, and is immediately cautious of Vinculus. Strange, on the other hand, is fascinated by his visitor, and thus begins a chain of events that could make or break everyone involved.

We could say more. There’s the entire matter of Marc Warren’s character, and how he becomes involved in the plot, that we haven’t even touched upon. There’s a sequence involving a pack of tarot cards that offers Kaye and Enzo Clienti a wonderful sparring match to savour. There’s the involvement of a cringeworthy society-luvvie, desperate to cling onto NorrrrrrELL for a moment in the spotlight, brilliantly brought to life by The Thick of It and Cucumber star Vincent Franklin. And there’s the story of Sir Walter Pole (Mr Selfridge star Samuel West), whose initial scepticism is disproven in ways he could never have dreamed.

But to say more would rob the opening episode of its strongest gambits. What we will say is that, though beautifully shot, and subtly scripted, the tale of Strange & Norrell is slow to get underway, and certain impressive sequences seem at odds with the majority of the episode. This is a dialogue-heavy show, and whilst said dialogue is richly nuanced, it is very much of the period and its half-truths and political implications could be hard to follow if you’re not giving it your full concentration.

Then again, Jonathan Strange & Mr Norrell is a show which deserves your full concentration. In an age where Twitter offers a live commentary of every programme, an awful lot of viewers on Sunday evening won’t really be paying attention, and that’s a worrying thought. Because Strange & Norrell rewards your efforts, and by the climax of the first episode, those who stick with it will be itching to find out what happens next.

Jonathan Strange & Mr Norrell begins on Sunday, 17th May at 9pm on BBC One. It airs in the US from Saturday, June 13th from 10pm (9pm Central) on BBC America, and is released on Blu-Ray and DVD in the UK on 15th June.