A SEANCE WITH LOWE & LLOYD FOR INSIDE NO. 9

The superlative creativity of Reece Shearsmith and Steve Pemberton seemingly knows no bounds, as demonstrated perfectly by the second series of Inside No. 9, which concludes its eclectic run of six one-off tales this week, with special guest appearances by Downtown Abbey star Sophie McShera and Mike Leigh veteran Alison Steadman in the macabre Seance Time.

Tina (McShera) has never consulted the spirit world before, and isn’t quite sure what to expect on her visit to psychic Madam Talbot (Steadman). The medium’s assistant Hives (Shearsmith) seems quite helpful, but there’s already something waiting for Tina on the ‘other side’ and he knows all about it.

To say more would, as ever, ruin the subtle surprises on offer, but we will add that there’s the added bonus of guest appearances by TVO regulars Alice Lowe and Cariad Lloyd, as well as Doctor Who‘s resident Sontaran, Dan Starkey (last seen in Ben Wheatley’s Deep Breath in August, and occasional improv artist alongside Phil Whelans).

For one week only, the show shifts from its usual Thursday night slot to WEDNESDAY at 10pm on BBC Two. We’ll be sorry to see Inside No. 9 go, as this second run has proved to be a telly highlight this year. The campaign for a third run begins here…

Spoof documentary series W1A moves to Inside No 9‘s old slot of Thursday at 10pm this week, as Hugh Bonneville and team meet to discuss the troubling rumours that Newsnight presenter Evan Davis is to compete in the next series of Strictly Come Dancing.

Elsewhere, there’s a new Pilates initiative as Anna (the ever magnificent Sarah Parish) puts herself forward for the newly advertised role of Head of Better, and ever put upon Lucy (the inimitable Nina Sosanya) faces yet more tinkering with her as-yet-uncommissioned drama project.

As ever, Rufus Jones and Jessica Hynes are part of the impeccable ensemble cast, and the results are yet more must-see telly. 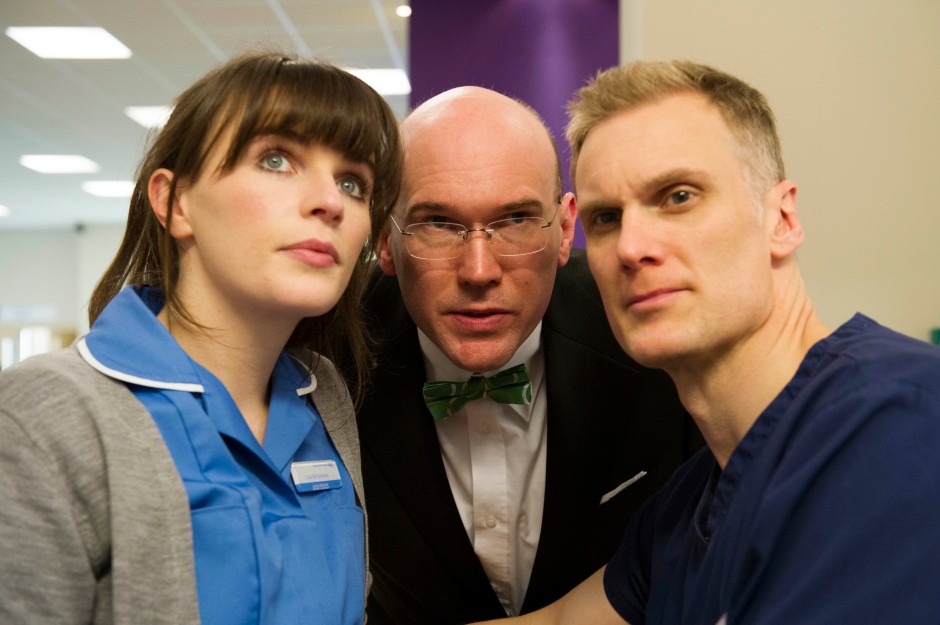 This week in the maternity ward comedy, a prisoner arrives on release to give birth, but the police need some crucial information, so Ian (McGuiness) tries underhand interrogation tactics on the expectant mother. Elsewhere, Ryan (Joe De Costa) discovers Lisa (Bea) has been lending money to Matthew (Boyd), and heads to the hospital in a rage.

You can catch this latest episode at 9:30pm on Wednesday evening, over on ITV1. Previous episodes are available on ITV Player now. 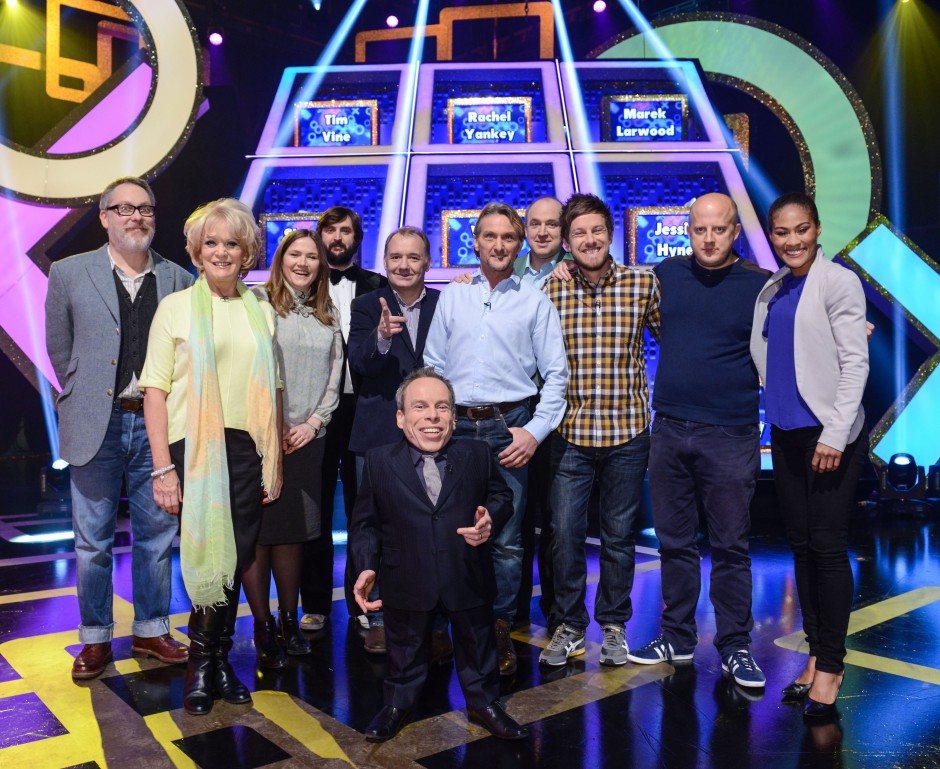 Okay – we have to admit: this one perhaps understandably slipped by us… but ITV’s latest incarnation of gameshow Celebrity Squares returned recently, with Warwick Davis (Life’s Too Short, The Day They Came To Suck Out Our Brains) at the helm.

The Harry Potter star is now two episodes into the run, which airs on Sunday evenings at 7:15pm on ITV1, and both installments to date have featured TVO regulars or connected artists, so they’re well worth catching up with on ITV Player.

The first show, which aired on 19th April, featured none other than cult duo Anna Crilly & Katy Wix amongst its star line-up, whilst the second, which aired yesterday (25th April), featured Jessica Hynes and House of Fools stars Vic Reeves & Bob Mortimer.

The third show, which will air on Sunday 3rd May, will feature comedy legend Doon Mackichan – best known for her work on shows such as The Day Today, Smack the Pony and most recently, Toast of London. And we will never rule out ITV gameshows for potential connections ever again.

There’s a whole lot more TVO goodness to savour this week if you know where to look on tv and radio, thanks to a healthy dose of repeats – and a sneaky little spot of guest starring here and there.

BBC Two repeats Noel Fielding‘s 2013 appearance on QI XL on Saturday 2nd May at 11pm, whilst over on Channel 4 an hour earlier, there’s another chance to see the excellent British sci-fi action movie Dredd, which memorably features heavy usage of Matt Berry‘s theme for Snuffbox.

On radio, duo Max and Ivan continue their series The Casebook of Max and Ivan with a guest appearance from Reece Shearsmith this Tuesday evening at 6:30pm on Radio 4. Last week, they sneaked in an appearance from Jessica Hynes, whilst Matt Lucas joined them the previous week. You can catch up with the whole run on iPlayer now.

Meanwhile, BBC Radio 4 Extra are revisiting a firm TVO favourite in the form of Lucy Montgomery’s Variety Pack – which also features Waen Shepherd and was written by Montgomery with Steven Burge and Dan Tetsell. The first two episodes of Series 1 are on iPlayer now, with Episode 3 airing again on Wednesday evening at 11:30pm.

If you’re in the US, and feeling left out, don’t forget that Steve Coogan continues his run in Happyish on Sunday evenings exclusively on Showtime at 9:30 pm ET/PT.

MAY I HELP YOU?

As we reported last week, this Friday sees the relaunch of Rachel Stubbings web series, Stubbing Out Problems.

The stand-up comic’s first run of S.O.P. videos began in May 2011, and featured Rachel’s disinterested alter-ego (Dr Stubbings, that is, not Rachel from Friends) trying – and failing – to help a series of clients sort out their issues, all played by fellow comedians. TVO regulars Stephen Evans, Alice Lowe, Tom Meeten, Alex Kirk and Aisling Bea joined the likes of Luke McQueen, Brett Goldstein, Katherine Ryan and Margaret Cabourn-Smith as clients across the series.

Following Rachel’s debut Edinburgh run with a show based on Stubbing out Problems in 2012, the concept was retired except for a handful of rare live revivals – but now at long last, it’s back with a bang! For the whole of May 2015, Dr Stubbings has pledged to heal at least one problem per day (except weekends), which is really impressive. The results will be uploaded to Vimeo every day* throughout May, and will feature a whole host of new clients – some of whom you can see in the teaser above.

There’s almost always a chance or two to see a TVO regular on the London stage, and whilst this week is a bit of a quiet one, there’s still a few chances to see great people this week.

4/5ths of @gimpfight in Channel Five’s first comedy in 8 years. They’re not really TVOers but we love em anyway. http://t.co/a90462JL3I

7 hours of live election coverage and comedy from @Channel4 on 7th May, featuring @WeeMissBea! http://t.co/WZd3DGvc1U pic.twitter.com/7FbxXUyM4n

Happy 40th birthday to the brilliant @spencermillman – producer of Man Down, TV Burp and some little obscure show called The Mighty Boosh.

Happy birthday also to the delightful @JohnnyBigface – the only man to survive Old Gregg, and an all round talented type.

This still makes us swell with pride for all we’ve accomplished on a budget of 27p. Love to all in the video! https://t.co/rsnRhyVhbJ