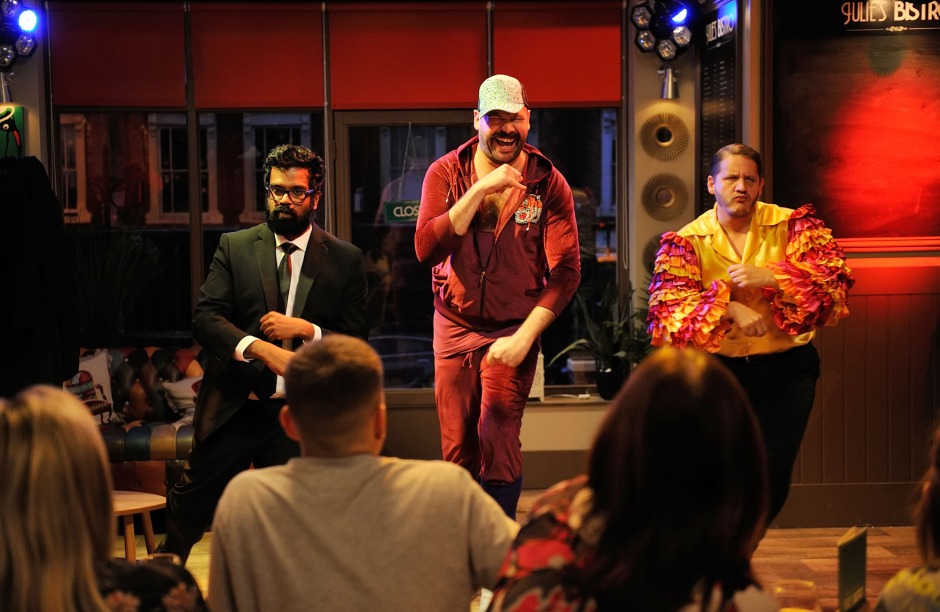 The latter three play a trio of hard-as-nails dancers, who threaten to wipe the floor with Vic, Bob and Beef at the Danceathon event over at Julie’s bistro. Though when Julie isn’t dealing with Bosh’s poor customer service, she’s dealing with a rat infestation.

As ever, Vic Reeves and Bob Mortimer lead the ensemble, alongside Matt Berry, Dan Skinner, Morgana Robinson, Daniel Simonsen and Ellie White. TVO saw this episode being filmed in Salford back in the Autumn when we went to interview the cast, and while it was a struggle to put together, we’re confident the end result is an absolute treasure. You can see for yourselves on Monday 16th at 10pm, over on BBC Two.

Nurse continues with Day and Hoult

Episode Two on Nurse – the new show from Paul Whitehouse starring himself alongside Esther Coles – continues on Tuesday. 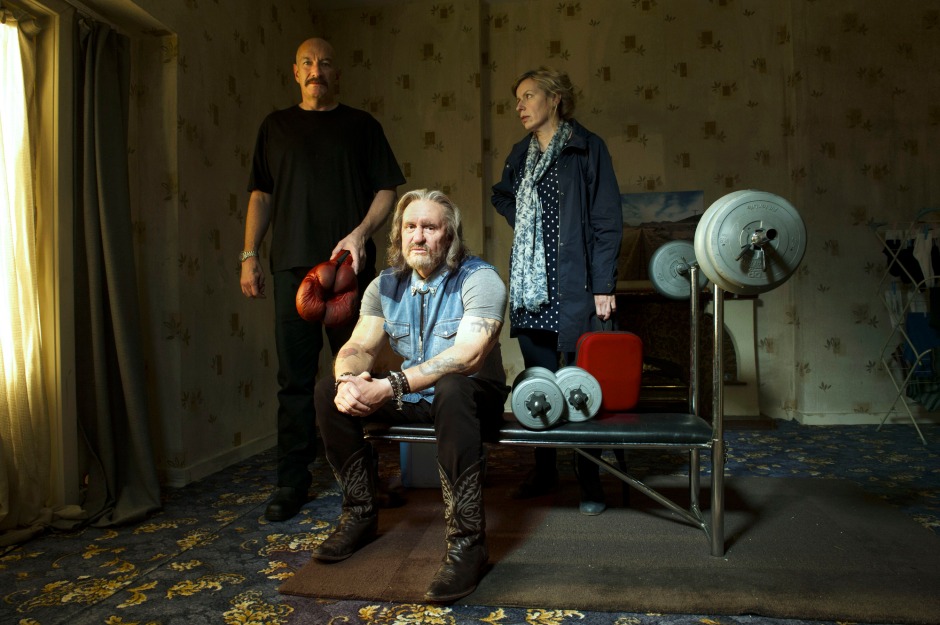 With Whitehouse starring as a cavalcade of troubled characters, and Coles portraying the community psychiatric nurse who has to see to them all, the show has charmed critics with its off-kilter comedy and a respectful look at mental health.

Co-starring Simon Day, Colin Hoult, Vilma Hollingberry and Rosie Cavalero, this week’s episode features a guest appearance from none other than Fast Show veteran Arabella Weir, and you can catch it on Tuesday at 10pm over on BBC Two.

Justin Edwards goes In And Out Of The Kitchen

Here’s one that slipped us by last week – as we reach the middle episode of a three-part sitcom starring Miles Jupp and Justin Edwards entitled In and Out of the Kitchen. 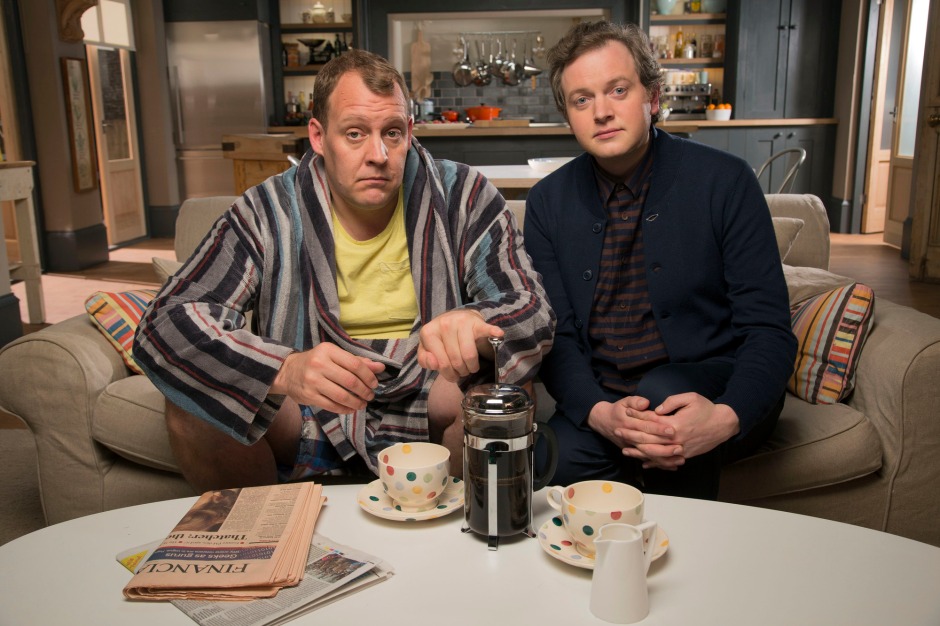 The show is based on the Radio 4 comedy of the same name, and charts the life of cookery writer Damien Trench (Jupp) and his partner Anthony (Edwards). The show also stars Philip Fox, Brendan Dempsey, Ade Ofeyoso and Margaret Cabourn-Smith, who just so happens to be the wife of one Dan Tetsell.

It’s a huge treat to not only see a show focusing on a middle-aged gay couple on our screens without any ‘novelty’ hoo-har about it, but also to see one that’s so expertly written and delightfully performed by its talented cast, and we urge you to catch up with the series, with Episode One available on iPlayer now.

In the second episode, which airs on Wednesday evening at 10pm on BBC Two, Damien is banned from the kitchen for the day as Anthony prepares their Valentine’s meal. However, his desperation to know more is soon the last thing on his mind, as his planned documentary about the culinary habits of the great poets is thrown into jeopardy.

More Moone-ing around for O’Dowd and company

Over on Sky 1, the third series of Chris O’Dowd‘s Moone Boy continues with a very special guest star this week, in the form or legendary broadcaster Sir Terry Wogan.

In this third episode, Martin (the ever brilliant David Rawle) finds out that every clip played on a TV video out-take show earns £250 – so he and Padraic get hold of a camera and try to film themselves doing something stupid. Meanwhile, the Moone household is bursting at the seams when Fidelma, Dessie and baby Rose move in, leaving Liam at the end of his tether.

One of the great charms about Moone Boy is that, though written by and starring a big star like O’Dowd, he is not afraid to let his character take a back seat to allow others to shine. And when you’ve got an ensemble like this, who can blame him? You can see the episode for yourselves on Monday 16th at 9pm.

Sunday evenings are that little bit warmer and fuzzier with Pompdiou around for teatime.

The utterly bonkers and penniless aristocrat is played with sheer delight by Matt Lucas, who is ably supported by the sublime Alex MacQueen as his put upon butler Hove. This week, Pompidou wants to spend Valentine’s Day with a date, and signs up to a dating agency to make his wish come true. Except, his idea of romance isn’t to everyone’s taste.

With special guest appearances by Anita Dobson and Paul Putner, this is another charming way to spend 25 minutes in the company of Lucas’ madcap alter-ego. It may not be to everyone’s taste, but it seems that ol’ Pompi has found his audience, and you can join them on Sunday 22nd at 6:35pm.

TVO IS FIVE all over again

As this weekend marked five years since we became a dotcom, and we had some bonus birthday messages that came in too late to be in our first round-up, we’ve extended our TVO IS FIVE video to include lots of new treats. You can see the results below.

As ever, there’s so much going on in the realm of the Velvet Onion, it’s quite easy to miss things. As well as our News pages, the best way to keep track is with our Twitter feed, and here’s a few highlights from throughout the week gone by. Until next time, keep on peeling!

We’ve got 25 guaranteed pairs of tickets to Rich Fulcher’s new pilot recording to give away randomly. Details at 9am: http://t.co/KVyvc8lTOx — The Velvet Onion (@thevelvetonion) March 11, 2015

Details on priority booking for That’s Rich. Get in while you can! http://t.co/9BHAJd0lOz

Wonderful arthouse cinema @CornerhouseMcr is closing to move to a new home soon. FOUR LIONS is part of the farewell: http://t.co/uRLb6EaHRw

Last chance to see Noel Fielding’s art at RHA this weekend. If you can’t get there, why not buy some to hang at home? http://t.co/PNSzyjfylJ — The Velvet Onion (@thevelvetonion) March 13, 2015

First up, check out Joey Page and Toyah together on 6 Music. Then, ask Joey for a private gig in your living room: http://t.co/vyW6fGDlye

If you haven’t seen it yet: the trailer for Inside No. 9 series 2 from @ReeceShearsmith & Steve Pemberton. http://t.co/LtLz6kHGV2 — The Velvet Onion (@thevelvetonion) March 14, 2015

Five years ago today, we stopped being http://t.co/VjjhYno2Fo and thevelvetonion.tk and became http://t.co/eMESbwsb8q at last.

I suppose that technically makes March 14th our second birthday. Well, if it works for the Queen… — The Velvet Onion (@thevelvetonion) March 14, 2015