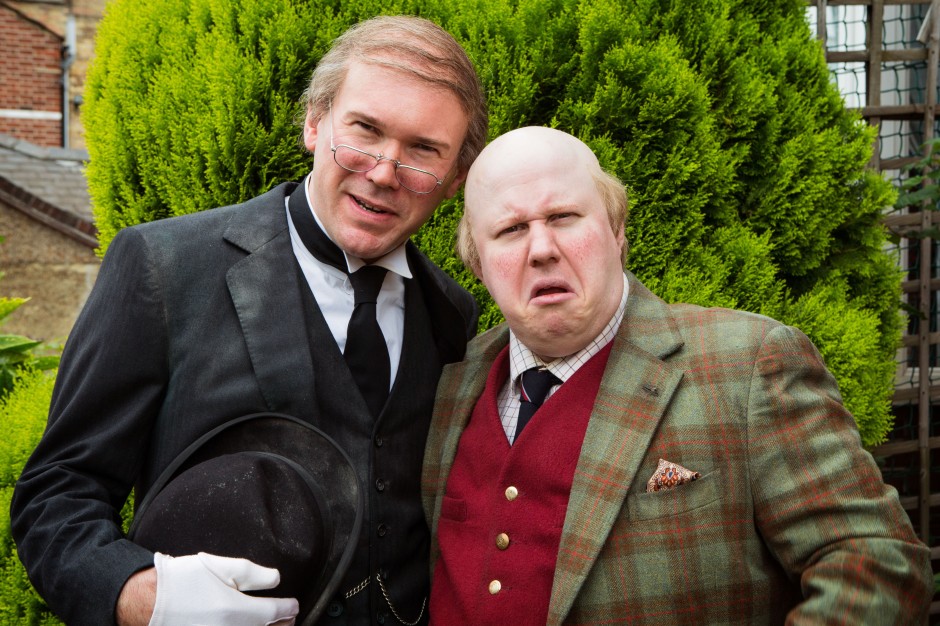 The show stars Lucas as the titular aristocrat, who is as pompous as he is penniless, as loveable as he is tubby and eccentric. He is all of those things in abundance – an elderly oddball who has fallen on hard times, and is forced to live in a knackered old caravan in front of his now crumbling estate.

Episode One airs at 6:30pm on BBC Two, on Sunday, 1st March. You can see a selection of preview images over on our news pages.

The delightfully bonkers House of Fools continues its second run at 10pm on Monday 23rd February via BBC Two. 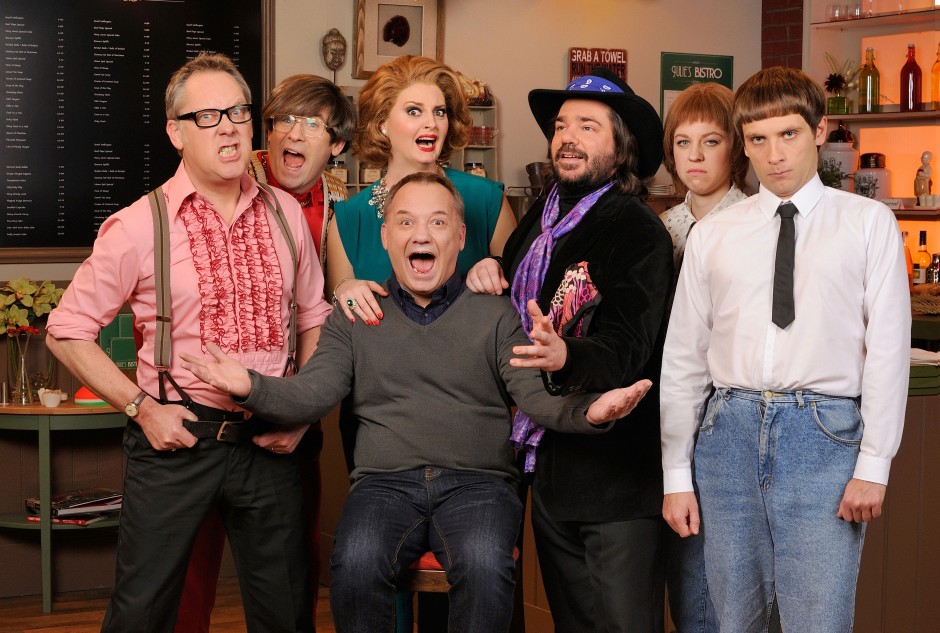 In this week’s episode, Vic steals some unused botox equipment and decides to test it out on Julie and Bosh, while Bob tries to get into Erik’s good books by making Rachel’s brithday a special day. Elsewhere, Beef’s saucy past catches up with him, as he is forced to hide the consequences of his actions from a very irate butcher – brilliantly played by guest star Johnny Vegas.

As ever, starring Vic Reeves & Bob Mortimer alongside Matt Berry, Dan Skinner, Morgana Robinson, Daniel Simonsen and Ellie White, this second episode is a much funnier affair that last week’s admittedly hilarious opener, so if you’ve not checked into the House of Fools yet, now’s as good a time as any.

If you missed us shouting from the rooftops recently, TVO was graciously invited to be one of the few publications to speak to the cast of House of Fools at one of the Salford filming dates late last year. You can read our trilogy of interviews over on our news pages now, but if clicky links are more your thing, you’ll like the highlights over the names ‘Vic Reeves and Bob Mortimer‘, ‘Dan Skinner, Daniel Simonsen and Ellie White‘, and ‘Matt Berry and Morgana Robinson‘.

Sadly we say goodbye to Catastrophe this week, with Sharon Horgan and Rob Delaney going out on fine form on Monday 23rd March at 10pm on Channel 4. 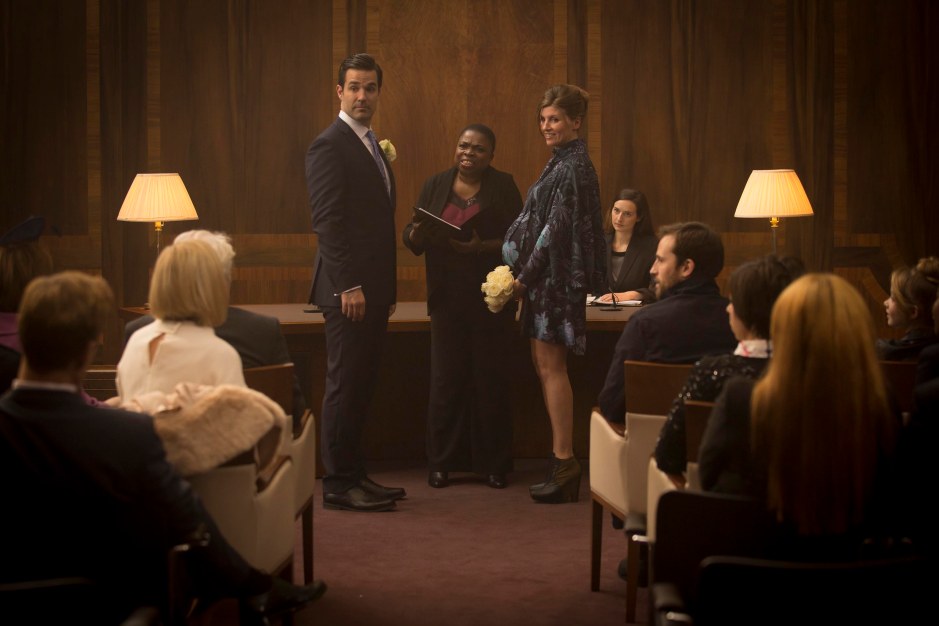 In the series finale, a heavily pregnant Sharon picks Rob up at the airport after a trip to Boston and tells him she has invited an old friend from Ireland to be her maid of honour. Rob decides to ask his fiancee’s brother to be his best man, but Fergal has more important things to worry about – his wife has left him and taken their children. The bride and groom later split up to enjoy their hen and stag nights, both of which spiral out of control.

It’s a great end to a bold and inventive series, which is thankfully returning for a second run in the not too distant future. There’s also an appearance from none other than John Hopkins as Sandy Laybourne, so if you haven’t caught up yet, get on 4oD and savour the magic. 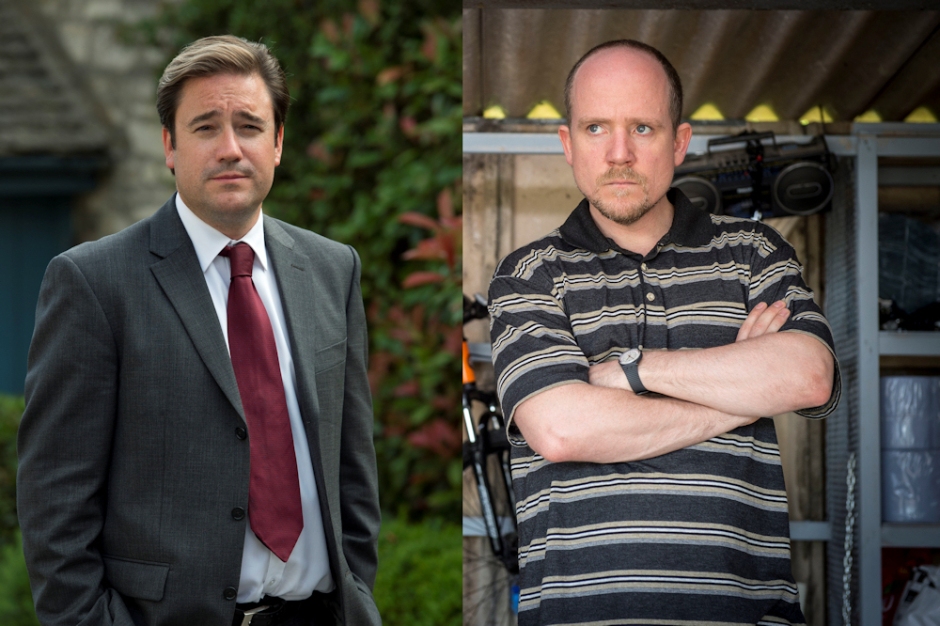 In this third and final episode, tensions rise as the Pagord parish council election approaches and each side steps up its campaign. It’s another meticulously crafted edition that lets this mini-series go out on a high, and if you enjoyed it, you can pre-order the dvd for £10.50 in The Velvet Onion Amazon Store.

It can’t have escaped anyone’s attention that Game of Thrones is set to return in April. With the fourth season (featuring Tony Way) currently nesting at the top of the dvd and blu-ray charts, Sky Atlantic have started their campaign to prep audiences for Season Five – and this may give us a chance to revisit a couple of TVO faces.

Not only does Tony Way appear in the second and fourth seasons as Sir Dontos Hollard, but Paul Kaye turned up as Thoros of Myr in the third season (we wonder if the GoT team were Mongrels fans like the guys at Pixar?), and the recurring role of Yara Greyjoy is played by actress Gemma Whelan: who also gigs regularly as a stand-up comedian and appeared in cult TVO smashes Cardinal Burns and The Day They Came to Suck Out Our Brains.

So in brand new clipshow Game of Thrones: Greatest Moments, there’s every possibility we’ll see these three characters once more, as cast members and celebrity fans count down the 20 most thrilling moments from the fantasy drama. You can see it at various times throughout this week, and the show is also available on SkyGo and Now TV.

The show, which toured the festival circuit last year, features Kendall deconstructing the key joke from her previous stand up show, which focuses on real life experiences back in 1992: a year of broken hearts, broken friendships, and broken orthodontic elastics.

Touchdown is a moving and often hilarious coming-of-age story that explores the clumsiness of adolescents, their awkward relationships, and painful need for friendship and love. If that’s not reason enough to pop along to the run between 24th-28th February, then why not read our interview with Sarah, in which she discusses the show at length, as well as Beehive, women in comedy and her obsession with Jaws 4…

As always, here’s some of the news you may have missed during the last week, via our Twitter feed. We’ll see you again next Monday, and throughout the week for more news, reviews and interviews. Keep on peeling!

Put down your turnips I have news. More #Hunderby this year for the good folk of Sky Atlantic http://t.co/cRrgoTXyKO pic.twitter.com/mMpzBm0iTs

The ever delightful @DanClarkEsq is fronting a brand new hub for New Wave Comedy at @sohotheatre starting next month! http://t.co/NGG4ZI8wJN

Here's part 1 of our new interview with @jamescookmusic about his new album, club night & history with The Boosh. http://t.co/DZ8tYtR69j

Is Nigel Farage a vampire? Paul Foot thinks so (and he can generally be trusted to get things right): http://t.co/IXZ33T0zgi

We haven't forgotten our second volume of birthday messages. Just waiting on the last few we're gonna get then they're all yours!

Only 20 tickets left for our feminism and photography workshop next Wed! Get yours quick http://t.co/JyuEWno0GT pic.twitter.com/gLW4113Ryt

One of our favourite snaps in the exhibition – of Steve Oram and @alicelowe after winning their @BIFA_film award pic.twitter.com/Oi2TtSaw3Y

For the curious, here is the long deleted and very rare cd edition, published in 2005 by Rillington Players. pic.twitter.com/vfacGWwoC4

If you'd like to own your own vinyl copy, you'd better get in fast. http://t.co/BWJW14BTBM