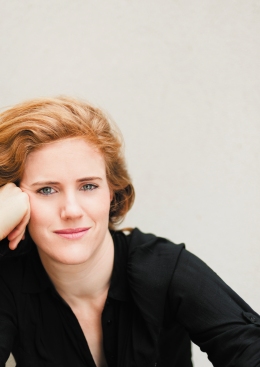 Stand up comedy legend Sarah Kendall returns to the Soho Theatre at the end of the month, with a limited run of her 2014 Edinburgh Fringe show, Touchdown.

The former Beehive star, who has carved out an impressive cult following after over a decade on the stand-up circuit, stormed the Fringe last year with Touchdown: a semi-sequel to her 2012 show Get Up, Stand Up which had concluded with a story about dropped the c-bomb on a high school teacher, the trouble she got into and the way she got out of it.

In Touchdown, she deconstructs this story and reflects on how, like with many stand up routines, the punchline was manufactured for the sake of the joke. This time around, the story is told as it truly happened, developing a captivating narrative of her life as a self-conscious teenage girl, being unpopular, having her heart broken and losing a friend.

It’s a delightful coming-of-age story which has generated rave reviews, and won the Piece of Wood Award for ‘the most exciting and innovative show’ at the 2014 Melbourne International Comedy Festival.

Now there’s a chance to see it again, with a four night run at Soho Theatre between 24th and 28th February. Running at 7:15pm each evening, tickets are on sale now priced between £10 and £15, over yonder. You can see a clip of Sarah at the MIC last year below.