This week sees not one, not two, but SEVEN great shows with direct TVO connections airing across UK television and radio. The result is over three hours of brand new great comedy for you to enjoy. Each one is as important as the other to us, as has always been The Velvet Onion way, so we’ll tackle them in chronological order. 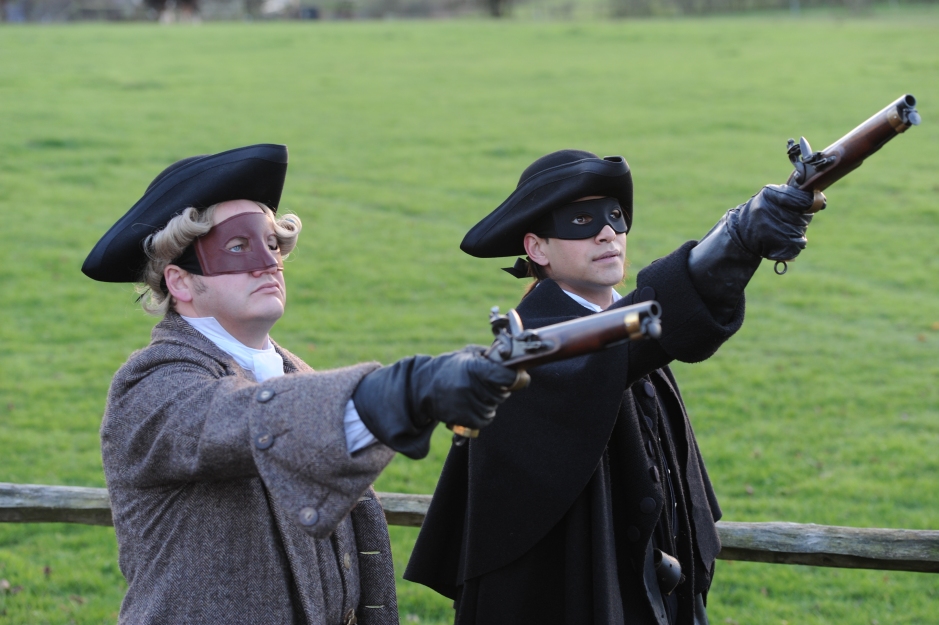 Now at the new time of 9:30pm on Monday 26th, the third episode of Drunk History UK once more sees famous British comedians get absolutely plastered in the name of reciting tales from the past – which are then re-enacted by a top notch cast.

With the likes of Tony Way, Tom Rosenthal, Dustin Demri-Burns (one half of Cardinal Burns), Mat Horne, Marek Larwood and Rebecca Front on re-enactment duties across the series, and tonight’s edition featuring Joel Lycett, Romesh Ranganathan and Brian Pern himself, Simon Day, it’s no doubt another edition worthy of your attention.

You can see a preview clip, telling the story of Dick Turpin, below.

Monday 26th at 10pm brings us Episode Two of Catastrophe – the brand new comedy from Sharon Horgan and Rob Delaney, in which an American man and an Irish woman fall in love in London whilst navigating the choppy waters of their increasingly complicated lives.

In this week’s edition, Sharon faces the reality of having a giant new room-mate in the form of Rob, the man whose child she happens to be carrying, and her brother Fergal (Jonathan Forbes) doesn’t make life any easier. Rob also meets up with an old school friend and comes up with a proper proposal to help Sharon feel better about their situation.

It’s another first rate episode, following up the huge promise of last week’s debut with a refreshingly honest, remarkably brutal and deeply satisfying take on modern life and relationships. If you missed Episode One, you can catch up with the series now via 4oD. Sharon and Rob were also on BBC Breakfast last week, which you can see for yourself below.

In this week’s episode, Tom (Daniel Lawrence Taylor) assembles a team to go to the supermarket as the camp is running out of food, where the group discover Steve Giggle: a terrified old children’s entertainer, as well as Spectrum: a gang of cannibal women roaming the countryside and preying on unfortunate victims.

Last week’s edition featured Dan Skinner a little earlier than we realised, and is available to view on ITV Player, alongside the Laurie Rose shot first episode, right now.

Also on Tuesday 27th January comes Episode Four of the second series of Count Arthur Strong – airing on BBC One at three different times, depending on your location.

Viewers in England can see it at the slightly later than usual time of 10:45pm, whilst those watching in Northern Ireland have to wait until 11:10pm. However, if you’re in Wales, you’ve got to wait even longer, as it airs at 11:15pm – and poor ol’ Scotland has to wait until Wednesday for an airing at 10:30pm!

Despite the schedule shuffling, the series from the pens of star Steve Delaney and Graham Linehan (best known for The IT Crowd and Father Ted), is still going strong.  In Episode Four, a conman posing as a plumber has swindled the locals out of hundreds of pounds, but he soon regrets the day he tangled with Arthur.

Wednesday evening sees the return of Love in Recovery to Radio 4 for it’s fourth episode. If you haven’t checked in yet, the series – written by Pete Jackson – follows the lives of an Alcoholics Anonymous meeting group, made up of characters portrayed by Sue Johnston, John Hannah, Eddie Marsan, Rebecca Front and Paul Kaye, whilst Julia Deakin plays village hall cleaner Marion.

In this fourth episode, Andy has a date for the first time in….well….longer than he’d like to admit. It’s up to the rest of the group to rally round and get him match fit. It’s another charming episode of a show based upon the real life experiences of Pete Jackson, and with one of the greatest casts ever assembled for a radio comedy, it’s a must listen. If you missed them, you can catch all previous episodes on iPlayer now.

Thursday evening brings us Episode Four of Crims – the new BBC Three sitcom from the pens of Mongrels writer Adam Kay and Grandma’s House writer Dan Swimer – at 10pm. Starring Elis James and Kadiff Kirwan, alongside Cariad Lloyd, Ricky Champ and Theo Barklem Biggs, the show has been attracting rave reviews and is a firm favourite in the iPlayer charts, which is good news – as it continues to build on its starting blocks for the rest of its run.

In this week’s episode, a prisoner manages to escape the Young Offenders Institution, and Prison Governor Riley – played by guest star Tracy Ann Oberman of Toast of London, Big Train and Doctor Who fame – goes on the warpath to discover how he did it.  With Creg in the firing line, Marcel forces Luke to work out how he did it.

It’s another suitably bonkers episode, with the cast on great form and some one-liners to die for. If you’ve missed previous episodes, you can catch up on iPlayer now.

At 11pm on Thursday 29th, it’s time to visit the Carnival of Monsters once more, as Colin Hoult and the gang bring the show back to Radio 4 for the fourth and final time this series.

If this isn’t enough Colin for you, don’t forget his regular updates to his YouTube channel, with new videos appearance every weekday until, he collapses from comedic exhaustion (never gonna happen). You can enjoy them all below.

It’s hard to believe it, but The Velvet Onion marks an important landmark of its own this week. We officially launched on January 30th 2010, making us five years old on Friday!

In that time, we’ve had numerous contributors and written thousands of articles on New Wave Comedy, as well as offering countless exclusives, dozens of competitions and a direct connection to many of the biggest and best names on the alternative comedy scene.

And we’ve got so much more to do. Thank you for the last five years, here’s to five more, and watch out on Friday when we’ll be bringing you a little treat to celebrate. As always – stay peeled.

As always, here’s some of the news you may have missed during the last week, via our Twitter feed. We’ll see you again next Monday, and throughout the week for more news, reviews and interviews, plus that Friday treat!

If Jareth was from the Midlands & had oranges instead of crystal balls. Here’s @alicelowe https://t.co/x11xCMId9H /ht @ChrisFarrelly

Aaahhh some happy news finally. @paulfoot is coming back to Sydney for shows in April. http://t.co/Z9GHKJJxMX — sarahjane (@sazzajay) January 19, 2015

If you’re enjoying #Crims, you can follow the cast & crew on Twitter. Writer Adam Kay is @amateuradam, and here’s producer @jamesgfarrell. — The Velvet Onion (@thevelvetonion) January 22, 2015

Supporters get behind Graham Linehan in the wake of the news that his show The Walshes is being axed by the BBC 😦 http://t.co/2UVUyeUGkK

An extraordinary day today filming with @Sheridansmith1, who unsurprisingly is utterly brilliant in this episode. You just wait. #InsideNo9 — Reece Shearsmith (@ReeceShearsmith) January 22, 2015

Viewers of ITV News may have spotted @mrkimnoble of Darkplace/Boosh fame earlier this week. No, really. https://t.co/KXr69HPgSv — The Velvet Onion (@thevelvetonion) January 23, 2015

Apparently, @RichardAyoade & @porksmith are both Weird Crushes according to @heatworld. Do you agree? http://t.co/hric0OKNts {via @Denton83} — The Velvet Onion (@thevelvetonion) January 23, 2015

Matt Berry, Aisling Bea & Katy Wix to feature in the cast of a new set of comedy shorts available soon on iPlayer: http://t.co/0GqYeplrQh

Kevin Eldon looks at where poetry & comedy cross over in a special show for Radio 4, feat a chat with @official_jcc : http://t.co/nF7lhm1lqv — The Velvet Onion (@thevelvetonion) January 26, 2015