We sat down with one of its co-writers: cult stand-up and former Mongrels writer Adam Kay, to discuss the gestation of the series, and his plans for its future.

Imagine the scene. You go to pick up your girlfriend’s brother, only to find he’s committed a bank robbery, and you’re now his getaway driver.  More accurately, considering you’re stationary and surrounded by armed police, his getting-caught driver.

Such is the plight of Luke (Elis James), whose situation is made all the worse when he is confined to a Young Offenders Institution for 600 days, sharing a cell with said girlfriend’s brother – the hapless Jason (Kadiff Kirwan).  The result is Crims, BBC Three’s brand new sitcom from the pens of Adam Kay and Dan Swimer.

“It’s a huge privilege to be trusted to write a few hours of comedy on telly,” Adam tells TVO following a sneaky peak at the first two episodes, “and everyone worked very hard to make the best product we could.  Though, the progression of a comedy writer is to write on sketch shows, write episodes of other people’s shows, script edit other people’s shows, then work towards someone trusting you to write your own rulebook. So if it’s not funny, I can’t say it’s because I was told a character couldn’t say that. It’s because I fucked up. I can blame every other show I’ve worked on for not being funny on other people.” He pauses for a moment and ruminates. “I guess I could still blame the actors on this one.”

Kay needn’t worry. Crims is hysterically funny. Set in a world slightly detached from reality, it features prison guards who are obsessed with urinal cakes, gang leaders with an allegiance to Team Edward, and regular discussions about wanking rotas.  One character goes by the name of ‘Black Elton John’, for no apparent reason than his need of spectacles. It’s that kind of show, and TVO loves every second of it. 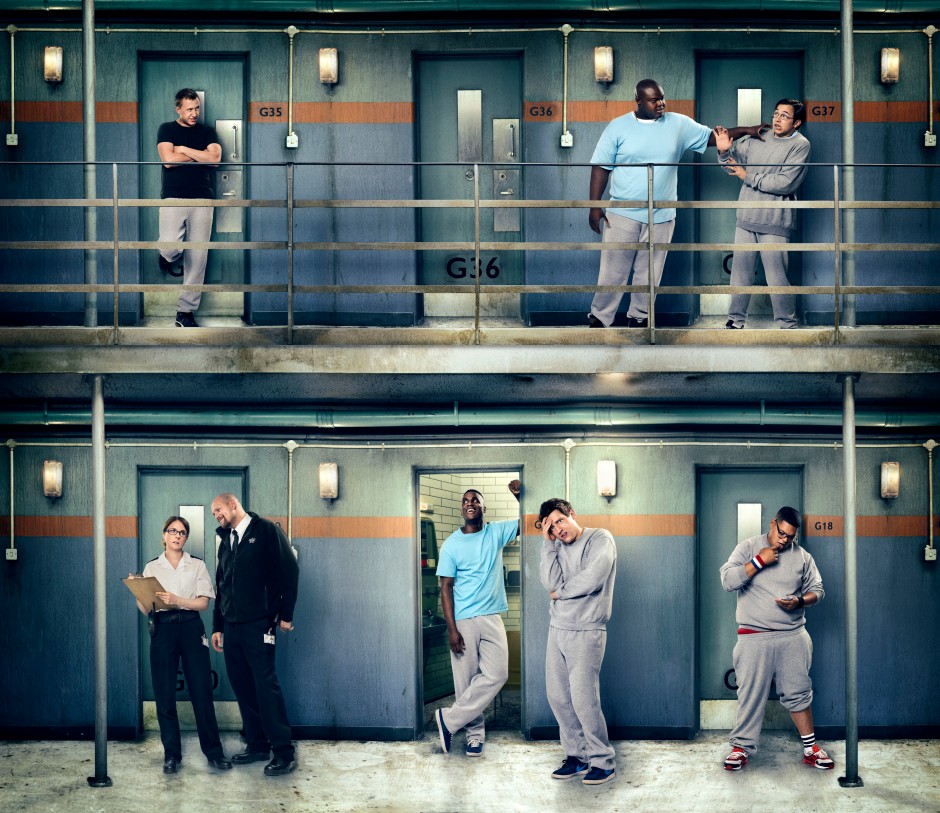 “The show found its feet as we were writing it,” explains Adam. “It didn’t feel out of place in the world to chuck that sort of weird stuff in. You never want to break the world with something outlandish. When people suddenly take stock and realise they’re just watching telly, it’s never good. But we peppered these crazy moments in without making it seem mad.  The temperament of the show allowed us to throw in those moments.”

Every character has something inherently likeable about them – even those who would typically be portrayed as purely negative stereotypes. For Kay, this was a natural decision to make. “You’re inviting people into your living room,” he states, “and the characters are not the most hyper-real on television. We’ve tried to give everyone enough fallibility and relatability to be enjoyable. There’s no real villains. It has to be more complex than setting up a goodie and a baddie, because no-one is really like that in real life.”

It also helps to set the series apart from the shows it will inevitably be compared to. Whilst no-one bats an eyelid at sitcoms set in shops or offices, you only have to look at the way Hyperdrive was dismissed before it even aired as a Red Dwarf knock-off to suspect that Crims will be unfavourably compared to Porridge by some, much as Dead Boss was before it.  Thankfully, Adam isn’t worried.

“I’m happy for anything I do to be compared to anything else,” he asserts. “Porridge casts a very long shadow, and rightly so. But in general, it’s less helpful thinking of a show in terms of the precinct it’s based in. A show is essentially the characters that are part of the world. We’d come up with the characters of Luke and Jason, and their relationship, before we came up with the situation they would be in.  I don’t feel constrained by it. I would happily write a sitcom set in a hotel. We could have set this in a retail bank, and it could have had the same vibe. But as soon as we plonked them in a prison, everything slotted into place.” 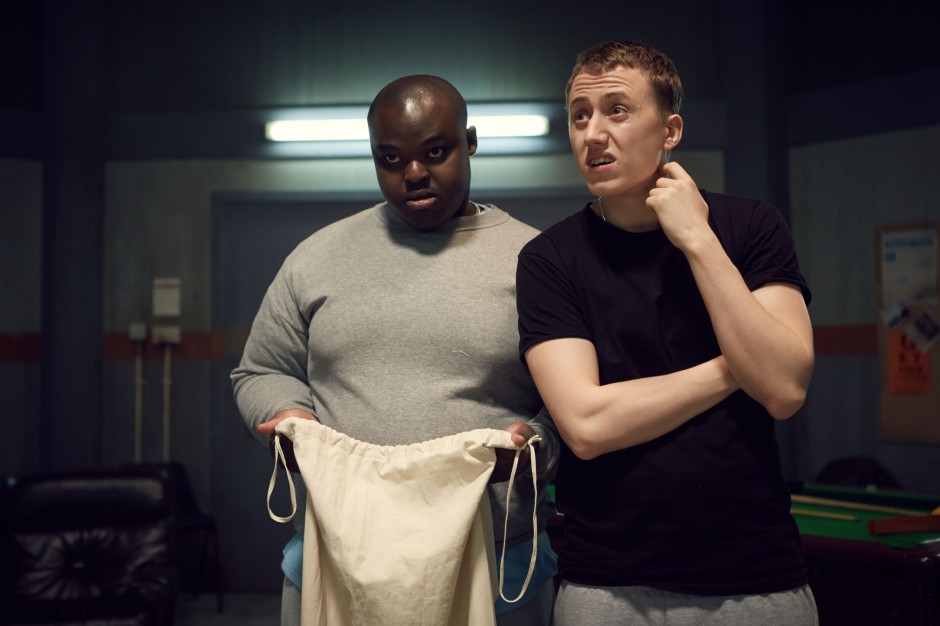 Part of what makes Crims stand apart from most recent comedy shows, is that it all seems to be coming from relatively new blood. Kay has spent years as a musical comedian, regularly selling out at the Edinburgh Fringe, and you may have heard his viral favourite London Underground. His first major television writing gig was crafting songs for the second series of Mongrels back in 2011. Co-writer Dan Swimer cut his teeth co-writing Grandma’s House with Simon Amstell, and has also written for shows as diverse as How TV Ruined Your Life and Never Mind the Buzzcocks. Despite their talents, neither man could really be defined as a household name just yet.

This vibe extends to the cast, too. Elis James is an up-and-coming stand-up with occasional sitcom acting credits to his name, with much of the rest of the cast made up of relative unknowns. Comedian and actress Cariad Lloyd (Cardinal Burns, Fit) plays Prisoner Officer Dawn, the only sane voice in the whole place. Former Dead Boss and Him & Her star Ricky Champ plays fellow warden and hapless idiot Creg. By far the more diverse CV on the cast-list is that of Theo Barklem-Biggs, who plays Twilight-loving thug Marcel – and who you may recognise from his appearances in productions as varied as The Inbetweeners Movie, Silk, Moses Jones, A Touch of Cloth or The Fades.

“We were certainly never put under any pressure to fill it with names,” Adam states. “Everyone just set about making the best possible show.  Cariad is brilliant. Ricky Champ’s been in a huge amount before and he’s always brilliant, likewise Theo. And there are some who’ve done smaller roles or we’re bringing them to the screen for the very first time. It’s exciting.”

This certainly isn’t your typical BBC Three starring-vehicle, though it could have ended up very different indeed.

“Lots of people were seen for the show,” reveals Adam, “Some with large amounts of profile, some with even less profile than these guys. The casting director put huge numbers of people up for it. But not only are Elis and Kadiff individually really great actors, but we knew their chemistry would show on screen from the moment we tried them together.  Ellis has been gaining profile of late, but I think this is the start of a long comedy journey for Kadiff in particular.”

One familiar face does turn up in Episode Two, however – in the form of Doctor Who legend Sylvester McCoy. As Luke tries to impress his girlfriend by getting an A-Level on the inside, he meets a daffy old Latin teacher, and the two bond over the true meaning of life, the universe and everything, with delightfully charming results.  Which, given Sylvester’s track record for delightfully charming everyone around him, is no surprise.

“I can tell you now,” Adam beams, “he was an absolute joy. Sylvester was a huge presence and source of energy and enthusiasm. We had a puppy on set that day, and normally the puppy gets all the attention on a set, but Sylvester stole its limelight very much, which is pretty unheard of.  He does it really well, too. It’s a very unusual part, and he gets away with it with just the right amount of mad.”

So what does the future hold for Crims? “At the start of every episode,” Adam tells us, “is the number of days they’ve spent in the prison. By the end of Episode Six we’re a couple of months in. If time continues at the same rate, we’re not going to be limited by their sentence. We’d rather keep doing it while we’re all enthusiastic about it enough to want to write more. You know how comedy works. If we were commissioned for Series Eleven, and we wanted to do it, we’d find a way.”

But is there a moment in this first series Adam is most proud of? He has two.  “Episode Six,” he grins, “where Creg is eating a sandwich. That’s a plot construction I was extremely pleased with.  And there’s one thing that Luke says, as a very sarcastic character. In a moment of annoyance to Jason, he asks: “Isn’t there a yourself you can go fuck?” I’m waiting for a chance to say that in real life.”