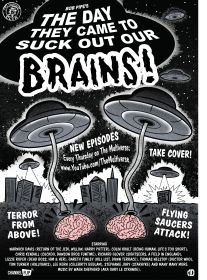 It’s the news we’ve been waiting for… The Day They Came To Suck Out Our Brains is becoming a movie – and YOU can get involved with the production!

If you haven’t seen it, and really, with all the love we gave it at the time, you really should have, you can see the each individual episode – including several off-shoots featuring Colin Hoult as egotistical actor Eric Shepherd and Warwick Davis as preposterous movie mogul Stanley Chester, over yonder – or right below this sentence.

Now the team are gearing up for a full length version of the tale, and are asking for pledges from fans and supporters through Indiegogo.

PLEDGE FOR THE MOVIE HERE!

For £5, you get a simple thank you, and £10 gets you a social media based thank you.  Where it gets interesting, is if you want to stump up a little more…

If you fancy a Brain Drain goody bag, you can have one for just £25. If you’d prefer a unique, personalised picture of James and Bob holding hands in bathing shorts thanking you – and frankly, who doesn’t need one of those in life – it can be yours for just £40.

Pop your bid up to £50, and get all of the above, plus a movie poster – which you can have signed if your bid reaches £75.

Those budding filmmakers out there may want to bump their bids up to £100, you get online access to the whole production and making of process – including scripts, storyboards and edits.  And if you have even more cash, £500 will give you a daily skype chat update with the film makers during film festivals, whilst £750 will get you pints and chats with the film makers AND the stars about the production at Shoreditch House.

For really flashy types, £5000 will get you the pints, and also the opportunity to be an extra in the film… and £10,000 will make you an associate producer with an invite tot he film festival of your choice.

All in all – this is a great opportunity to support independent film makers and see a brilliant project reborn as a whole new adventure.  So get involved now!

2 Comments on Brains Movie is a (indy) Go-Go!