The Velvet Onion is proud to be able to once more offer one lucky winner a pair of tickets to see the latest incarnation of legendary characters Jeeves & Wooster in the West End.

It tells of a perfectly delightful trip to the countryside which takes a turn for the worse as Bertie Wooster is unwittingly called on to play matchmaker. He must reconcile the affections of his host’s drippy daughter Madeline Bassett with his newt-fancying acquaintance Gussie Fink-Nottle, and if Bertie, ably assisted by the ever-dependable Jeeves, can’t pull off the wedding of the season he’ll be forced to abandon his cherished bachelor status and marry the ghastly girl himself!

The show began life late last year with Stephen Mangan and Matthew McFayden in the title roles, and its runaway success has scored a West End extension. Housed at the prestigious Duke Of York’s Theatre, London, Mangan & McFayden remain in their roles until 5th April, with Webb & Heap set to take over two days later until at least September 20th 2014.

And this, dear readers, is where TVO comes in. Thanks to our friends at Duke Of York’s Theatre and AKA, The Velvet Onion is able to offer a pair of tickets to one lucky winner for a Webb & Heap performance of their choosing.

What is the name of the TVO regular who appeared with Robert Webb in The Bleak Old Shop Of Stuff, and with Mark Heap in Big Train and Jam?

Email your replies to competitions@thevelvetonion.com by 11:59pm on Sunday 16th March.

One winner will be picked at random, and contacted by AKA to arrange tickets for a performance of their choosing (subject to availability) any Monday, Tuesday or Wednesday between April 7th and May 28th 2014.  For more details, see the T&C below.  Good luck! 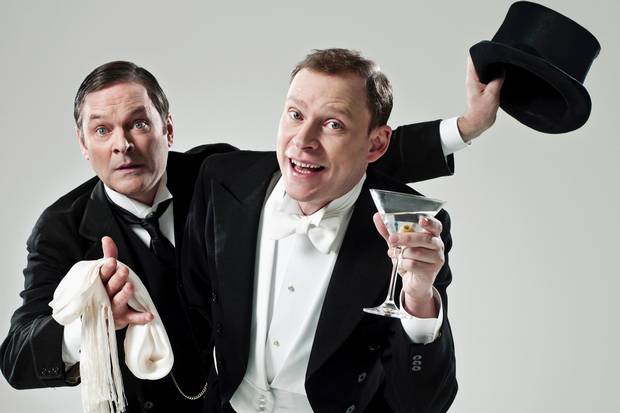 If you don’t win, or just want to see the show, you can buy tickets over yonder.  For more info on the show, visit it’s official website.

This competition offers 1 pair of tickets for any performance of ‘Jeeves & Wooster in ‘Perfect Nonsense” at Duke Of York’s Theatre on selected dates between April 7th 2014 and May 28th 2014.  These performances will offered – subject to availability – from Monday, Tuesday or Wednesday performances, on April 7th, 8th, 9th, 14th, 15th, 16th, 21st, 22nd, 23rd, 28th, 29th, 30th and May 5th, 6th, 7th, 12th, 13th, 14th, 19th, 20th, 21st, 26th, 27th, 28th.   The winning entry will be selected at random, from all who correctly answer the question: “What is the name of the TVO regular who appeared with Robert Webb in The Bleak Old Shop Of Stuff, and with Mark Heap in Big Train and Jam?”  The winner will be contacted via the email address they use to enter. Details will not be shared with any additional third parties beyond The Velvet Onion, Duke Of York’s Theatre, AKA and the guest-list for the venue.

Only entries made to competitions@thevelvetonion.com will be accepted.  The Velvet Onion will not accept entries as comments to this post, replies to our Facebook/Twitter pages, comments to any other posts in error or emails to any other email address in our domain, nor any entries received after 11:59pm on Sunday, 16th March. This competition is being run entirely by The Velvet Onion, with prizes organised by Duke Of York’s Theatre and AKA.  One entry per person. Any entrants found making multiple entries from the same IP address will be disqualified, and banned from entering further competitions run by The Velvet Onion. The judge’s decision is final. There is no monetary value to this competition and no cash alternative will be offered. The winner must choose their preferred performance to attend prior to confirmation of their seats, and dates/performances cannot be changed.  The winner will be responsible for their own travel and/or related expenses. The Velvet Onion reserves the right to withdraw this competition if any overriding issues arise.