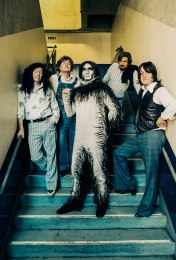 This week saw the launch of The Life Of Rock With Brian Pern – the magnificent new spoof documentary series from Rhys Thomas and Simon Day featuring a whole host of big name guest stars.

Episode One aired on Monday, and in amongst the big name artists discussed (Bowie was a fag-stealer; Mercury made his piano out of a really, REALLY big fireplace etc), were a series of vintage clips of prog-rock king Brian Pern in action.

These included Thotch at the peak of their excess, with the epic Land Of The Crab, industrial jungle influence Naughty Man from 1979, and the infamously divisive solo single and pop smash, Spirit Level.

Now the full performances have been dug out of the archives and uploaded to the BBC Comedy YouTube Channel, and you can see all five via this handy playlist below.

In reality, of course, they are the work of the show’s composer, Steve Burge, and also feature Tony Way, Lucy Montgomery and Al Murray.