As we reported last week, Sandling was responsible for writing this year’s Absolute Radio panto, which turned featured the Timelord superstar alongside Eastenders regular Shane Richie and breakfast show host Christian O’Connell, with Richard also in amongst the ensemble cast.

After airing on Absolute Radio on Friday, footage of the event – Zombie Claus – was uploaded to YouTube, with all three parts available to view at the foot of this article. 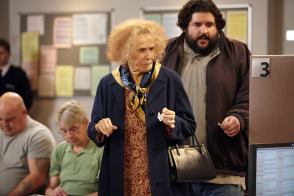 The next time Richard will be on telly, however, will be with Donna Noble herself – the glorious Catherine Tate – who has revived her popular Nan character for a one-off special.

Catherine Tate’s Nan will air on Saturday, January 4th, at 9:30pm (11:20pm in Wales), and features the colourful pensioner paying a chaotic visit to the local council offices and then the hospital.  Regular collaborator Mathew Horne also features as Nan’s grandson Jamie, and Sandling will be playing a character called Steve.

We’ll aim to bring you iPlayer links shortly after transmission, so stay peeled, and in the meantime, you can savour that Xmas panto madness below.