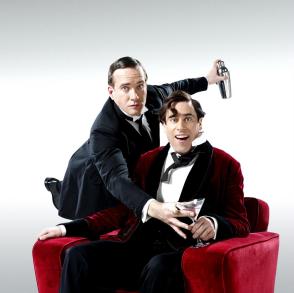 The Velvet Onion is proud to be able to offer one lucky winner a pair of tickets to see the brand new incarnation of legendary characters Jeeves & Wooster in the West End.

It tells of a perfectly delightful trip to the countryside which takes a turn for the worse as Bertie Wooster is unwittingly called on to play matchmaker.

He must reconcile the affections of his host’s drippy daughter Madeline Bassett with his newt-fancying acquaintance Gussie Fink-Nottle, and if Bertie, ably assisted by the ever-dependable Jeeves, can’t pull off the wedding of the season he’ll be forced to abandon his cherished bachelor status and marry the ghastly girl himself!

The first performances of this new stage play adapted from the works of P.G. Wodehouse takes place at the Richmond Theatre, London, on Thursday, October 10th – where it begins a series of previews – before a jolly jaunt off to the Theatre Royal in Brighton for more previews starting Tuesday, October 22nd.

Following this, the show’s official world première takes place with its West End debut at the prestigious Duke Of York’s Theatre on Wednesday, October 30th, where the show will run until at least March.  And this, dear readers, is where TVO comes in.

Thanks to our friends at Duke Of York’s Theatre and AKA, The Velvet Onion is able to offer a pair of tickets to one lucky winner for a performance of their choosing.

What is the name of the Channel 4 sitcom in which Stephen Mangan starred alongside TVO regulars Sharon Horgan, Matthew Holness and Dolly Wells?

Email your replies to competitions@thevelvetonion.com by 11:59pm on Sunday 29th September.

One winner will be picked at random, and contacted by AKA to arrange tickets for a performance of their choosing between October 30th and March 6th, barring a few exception dates.  For more details, see the T&C below.  Good luck!

If you don’t win, or just want to see the show, you can buy tickets over yonder.  For more info on the show, visit it’s official website.

This competition offers 1 pair of tickets for any performance of ‘Jeeves & Wooster in ‘Perfect Nonsense” at Duke Of York’s Theatre between October 30th 2013 and March 6th 2014, with the exception of November 12th 2013 and performances during peak weeks: December 15th 2013 to January 4th 2014, and February 17th 2014 to February 23rd 2014. The winning entry will be selected at random, from all who correctly answer the question: “What is the name of the Channel 4 sitcom in which Stephen Mangan starred alongside TVO regulars Sharon Horgan, Matthew Holness and Dolly Wells?”  The winner will be contacted via the email address they use to enter. Details will not be shared with any additional third parties beyond The Velvet Onion, Duke Of York’s Theatre, AKA and the guest-list for the venue.

Only entries made to competitions@thevelvetonion.com will be accepted.  The Velvet Onion will not accept entries as comments to this post, replies to our Facebook/Twitter pages, comments to any other posts in error or emails to any other email address in our domain, nor any entries received after 11:59pm on Sunday, 29th September. This competition is being run entirely by The Velvet Onion, with prizes organised by Duke Of York’s Theatre and AKA.  One entry per person. Any entrants found making multiple entries from the same IP address will be disqualified, and banned from entering further competitions run by The Velvet Onion. The judge’s decision is final. There is no monetary value to this competition and no cash alternative will be offered. The winner must choose their preferred performance to attend, and dates/performances cannot be changed.  The winner will be responsible for their own travel and/or related expenses. The Velvet Onion reserves the right to withdraw this competition if any overriding issues arise.