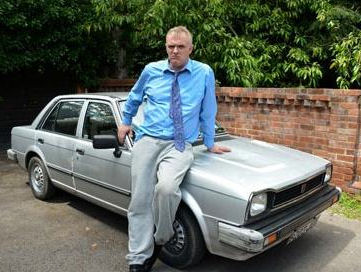 Channel 4 is predicting a smash hit with its forthcoming sitcom Man Down – and with its prestigious cast and crew, we can’t blame ’em!

The show stars Greg Davies as a childish schoolteacher, with his oft-remarked lookalike (and all-round comedy legend) Rik Mayall also featuring as his dysfunctional dad.

TVO’s very own Spencer Millman (The Mighty Boosh, Man To Man With Dean Learner, TV Burp etc) is the series producer, and it is being directed by Matt Lipsey, who was responsible for This Is Jinsey, Saxondale, Psychoville and Human Remains to name but a few.

Impressive stuff, we’re sure you’ll agree – as have Channel 4.  What began life as a pilot for their FastFunny strand was quickly advanced to series status, with the pilot held back for retooling as Episode One.

Now production company Avalon is pressing ahead with a Christmas Special, following a huge response from those lucky enough to attend a screening of the first two episodes at The Edinburgh International Television Festival recently.

The news was announced to BroadcastNow earlier this week, alongside the casual mention of The IT Crowd finale possibly airing alongside the special at Christmas.  We’ll be sure to bring you more news as soon as we have it from the good folk at Channel 4, so stay peeled.