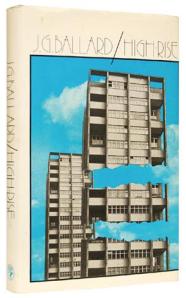 The iconic book told of a luxury tower block which collapses into anarchy, with rival floors waging war against one another as primal urges take control.  Sounds typically Ben, of course, and we’re delighted that he and his regular screenwriter (and partner) Amy Jump are on board to bring the story to the screen.

The production is the brainchild of film producer Jeremy Thomas – a longstanding friend of the late novelist – and will be produced by Film4, in what Wheatley has promised will be a faithful adaptation.

Ben spoke to ScreenDaily exclusively, telling them:  “This project started out with me looking at my bookcase, seeing the book, and thinking: ‘that would make a great film.  The idea is to be true to Ballard.  It is such a rich and interesting time that it seemed a shame to set it anywhere other than England.”

The film will presumably be made following next year’s shoot for Wheatley’s much anticipated horror Freakshift. We’ll be aiming to keep a watchful eye on proceedings, so stay peeled for more info.