With a new online sketch series currently under way, TVO thought it was time we hooked up with a man with several connections to Onion Land – Mr David Bussell – to talk about the glorious nonsense that is, Hunka Wunda.

Bussell first fell onto our radar a few years ago when, alongside IT Crowd veteran Matthew Stott he made a pilot show, Missing Scene, featuring Alice Lowe and Kevin Eldon.  Despite – or perhaps because of – it being as mad as a box of frogs and utterly charming, the show was not commissioned, and it was some time before it quietly leaked online.

David, who also has The Best Website In The World ™, later cropped up in Nicky Lianos‘ delightful short Dead Happy alongside Alice Lowe and Tom Meeten, and we’ve kept a watchful eye on his activities ever since.  A master of online humour, Bussell’s work is often to be found going viral, and now his sketch series Hunka Wunda, produced with regular collaborator Matthew Stott, is getting a lot of attention.  Rightly so, we reckon, because it’s brilliant.

After a short meeting recently, we realised David is a frightfully busy man of late, and together we elected to conduct an email interview.  We figured this could end with glorious results, or could see us crash into the sun like confused space-moths, but it was worth a shot.  Here are the results.

Hi David!  First off, For those who don’t know, what *is* Hunka Wunda?  And how did it come about?

Hi, Paul.  Hunka Wunda is a series of web sketches co-produced by myself, David Bussell and Matthew Stott.  We started putting a new episode out every fortnight back in June, and we plan to keep going at least until the end of the year.  We’ve worked together previously on a couple of sketch show pilots, Missing Scene and Overactive Solutions, and decided rather than putting it all out there in one go that we’d portion the material out over several months this time.

I suppose a benefit of splitting it up is that you have more potential to go viral.  You seem very ‘up’ on the way the internet can work well for comedy…

Well yes, that’s certainly what we’re hoping for. With a pilot episode you either get a pass or a commission, but with a long-running series like this there’s an opportunity to create one-off sketches that really prove themselves with an audience, which can only help sell the package as a whole. Another thing we’re interested in is not being too hard on ourselves about giving Hunka Wunda a particular (and I feel the bile rising in my throat as I say it) “USP”. With Missing Scene and Overactive Solutions we created very specific frameworks to hang our sketches off of, whereas we’re looking to define Hunka Wunda by tone and sensibility alone. That and sticking Mark Davison in as many sketches as possible because he’s bloody brilliant.

Yes, I was going to ask you about the casting decisions.  How did you decide who to work with?

The people we’ve put on screen so far have either been performers I have shared a stand-up or cabaret bill with, or have impressed us with something of theirs we watched online. As for the writing, we do the bulk of that ourselves, but we also assembled a great little team of collaborators; including a talented newcomer called James Rose and Madeleine Brettingham, a refugee from Matthew’s time working on the aborted fifth series of The IT Crowd.

How far ahead have you planned for Hunka Wunda?  Do you know what the rest of the year will (hopefully) look like, and who will be involved?  Or is it a more fluid process?

We wanted to put out new videos with consistency, so we made sure we had a good amount of footage in the can before we launched. Some of the stuff we filmed didn’t make it through quality control but we still have enough material to see us through 2013. If you carry on watching you’ll see lots of familiar faces but you’ll also see some folks who haven’t made an appearance yet, such as Sarah Campbell and Stuart Laws. Meanwhile filming continues on a monthly basis, and will continue to do so until we exhaust the goodwill of every last comedian in the country. 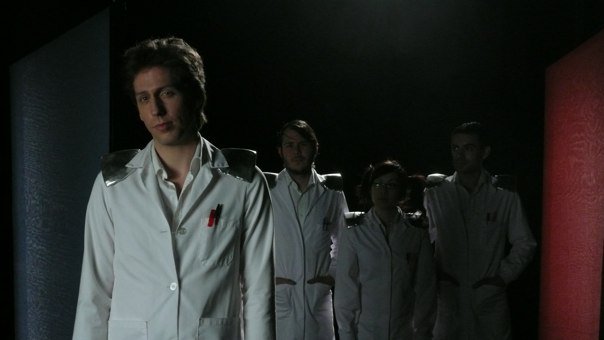 Haha! It’s a noble cause.  Obviously, you’ve worked with a fair few TVO regulars before. Is there anyone in Onion Land you’d be particularly interested in Hunka Wundering?

Well, I’ve been in a couple of things with Alice Lowe now, and would love another opportunity to work with her. We also know from prior experience that Kevin Eldon‘s a wonder to collaborate with, plus he was a key member of Big Train, which has had a huge influence on Hunka Wunda and just about everything else we’ve made. In the end it’s about picking the right person for the role though (the right person who also has an utter disregard for financial remuneration).

Missing Scene was great, but lived up to its name by only turning up long after the project stalled after going down the traditional route to getting a commission  On the opposite end of the spectrum, Hunka Wunda is getting a fair bit of attention, and is reaching a wide audience without the big guns. Does this put you off the standard process for getting filmed comedy to the masses at all?

Ha, yes, I suppose Missing Scene did become a bit of a self-fulfilling prophecy in that sense.

We’re pretty happy with the attention Hunka Wunda has gotten so far, though it’s early days yet. We have been made a couple of offers that might help bring bring the format to a larger audience, so we’ll definitely be exploring those avenues so long as we can continue to maintain creative control. Unlike previous projects we’re not actively chasing a TV commission with Hunka Wunda but we’re certainly hoping to use it as a calling card down the line.

What I am really keen on in your work is that, much like Peter Serafinowicz, you take the ordinary and mundane and make them silly with inventive curveball ideas. Be it a shopping channel during the apocalypse, cars riding bacon or going back further, the hidden messages you leave in hotel rooms. Do boring things inspire you?

Very much so. A word we like to throw around a lot is “impossible” and there’s something of that in most of what we do. We get a real kick out taking a mundane situation, whether it be posing for a group photo, or an office brainstorming session, or even just a couple of flatmates having a chat, and chucking an element into the mix that causes something to happen that’s outside the bounds of possibility. I think it’s our way of demonstrating how utterly unsatisfactory we find real life (sort of a joke). 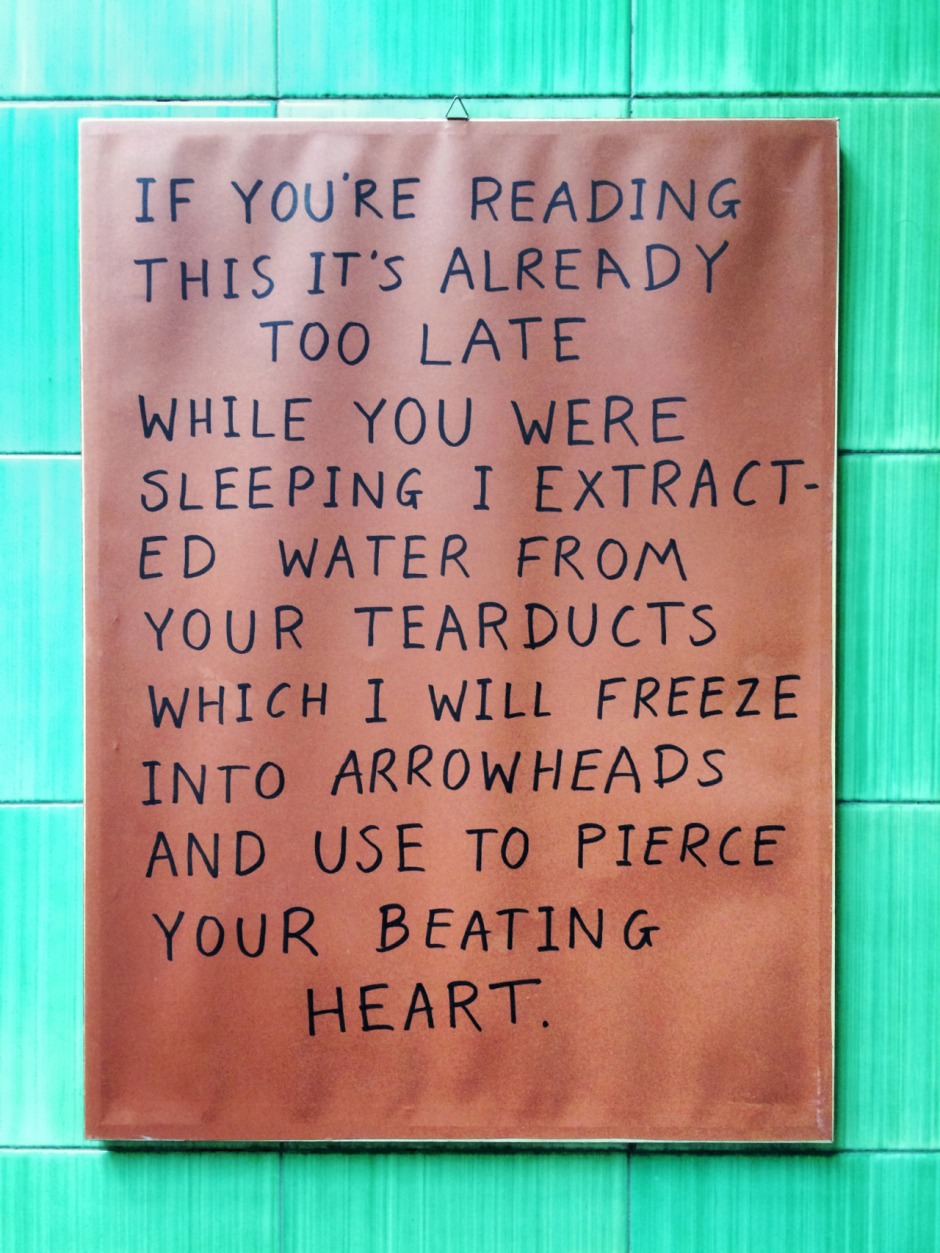 An example of David Bussell’s now legendary ‘If You Reading This It’s Already Too Late’ messages in crappy hotel rooms. © David Bussell

What’s next for you then, besides Hunka Wunda? And do you have a dream project lying in wait for that one day when money and resources are no longer an issue?

Well, next on the agenda is proving we can handle narrative by shooting a sitcom pilot. After that we have a low budget feature we’re in the process of redrafting, but that’s a whole other level of production!

Awesome. We’ll look forward to seeing those. Do you have any words of wisdom for aspiring writers, directors or comics out there reading this and wondering how to get to your stage?

For performers there’s an easy answer – get out there, perform and keep performing. Similarly writers need to write, but a writer frustrated at making blueprints for things no one wants to realise should be prepared to take that next step and self-produce. There are people out there who will attach their name to your project just so long as it’s good enough. Find those people and put yourself in the centre of things – you’ll learn an incredible amount from the experience and you’ll come out of it a far better writer. Then abandon everything and go live on a Kibbutz because we really don’t need the competition.

Haha! Rounding up then… your house is on fire. Not really, this is entirely hypothetical. Don’t panic. Your hard drive gets charred and only one currently unreleased sketch from Hunka Wunda survives. Which one are you praying it is?

That’s easy, our next sketch ‘Do You Like Magic?’ dropping this Wednesday 31st July!

Nice plug. Finally, then… if you were a pub, what would you be called?

David Bussell, thank you very much.