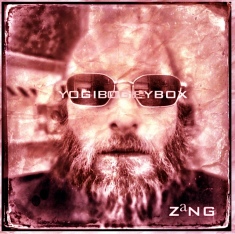 The legendary Paul Kaye has teamed up with Marc Warren and long-standing collaborator Adie Hardy to launch a new alt-rock band, Zang.

We first told you about Zang back in March, when Paul graciously gave us a sneaky peak at their first track, Yogibogeybox.

Now that track has been unleashed online, via a lo-fi music video on Warren’s YouTube channel.  You can see the results below.

Zang marks Kaye’s return to the world of rock music, following his work soundtracking Kathy Burke’s Walking And Talking series last year.  In the late 80s and early 90s, before the days of Dennis Pennis, Paul achieved cult fame in bands We Are Pleb and TVEye, and regularly performed in (or as) The Mike Strutter Band in recent years.

We can’t wait to hear more.