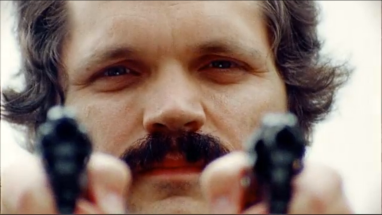 Exciting news… there’s a very rare chance to grill Matthew Holness about his work at the BFI later this week.

The man formerly best known as Garth Marenghi will be attending a Q&A session alongside fellow film-maker Ally Gipps as part of Warp Films birthday celebrations.

Holness’ short film A Gun For George will be shown at the event alongside other notable shorts made by the company.

Tickets for the event on Friday, April 5th are priced between £8.50 and £11, and are available now via the BFI Website.

If you can’t make it, and haven’t yet seen A Gun For George, you can now view it on the Film4 website over yonder. Meanwhile, both Curtains and My Wrongs 8245-8249 are available on dvd via The Velvet Onion Amazon UK Store.