The channel has kindly let us catch a sneaky peak of the first episode, and our editor in chief shares his thoughts below.

When a shipwrecked stowaway with a haunted past arrives in the small coastal town of Hunderby, the lives of its inhabitants are set to be changed forever in Julia Davis’ first full length series by her own hand since Nighty Night, with the more than able hands of Barunka O’Shaughnessy as script editor (and co-writer later in the run).

Based on Daphne Du Maurier’s Rebecca, the costume drama also has a whiff of Austin and Bronte about it – with dashing heroes, widowed pastors and a matriarchal housekeeper. Yet, as with Nighty Night, Davis’ blackly comic humour runs through Hunderby’s veins, at times threatening to topple it into Gormenghast levels of absurdity, yet always just about reigning in proceedings thanks to its stellar ensemble cast.

Former IT Crowd and Being Human guest star Alexandra Roach’s gentle Helene is a troubled soul, plagued by memories of a haunted past, only tantalisingly glimpsed in the first episode. Washing up on Hunderby during the lengthy prologue (narrated by our very own Julian Barratt), she is soon wed to puritanical man of the cloth, Edmund, brilliantly portrayed by Alex MacQueen (Four Lions, The Wrong Door, The Thick Of It).

As Edmund MacQueen is every bit the stuffy, put-upon gentlemen, who mourns for his dead wife, enjoys breasts, and yearns for his bubbly milk. By contrast, TVO regular Rufus Jones is every bit the polar opposite as Doctor Fogherty. A dashing man, made entirely of bravado, horsemanship, artistic skills and a good way with avian pets, he nevertheless longs wistfully for Helene the moment he sees her. 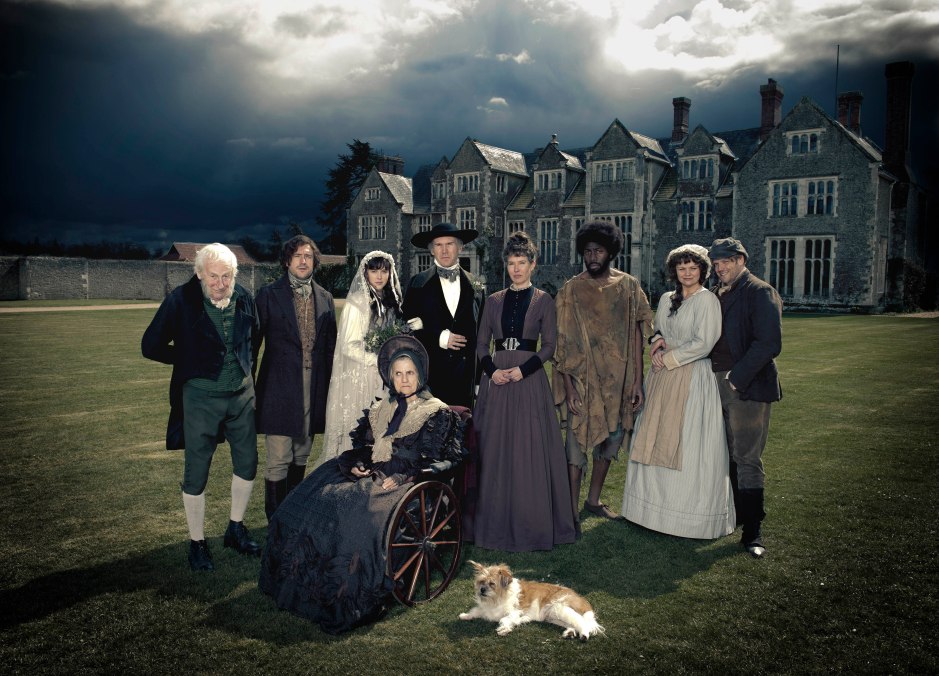 Somewhat less fond of the mysterious new arrival is housekeeper Dorothy – played by Davis with her usual unrivalled comic mastery. Seemingly stern but kind-hearted to all but Helene, Dorothy is hiding some terrible secrets, and sets about menacing the poor girl thanks to an unhealthy obsession with Edmund’s dead wife.

Throw in an almost unrecognisable Alexander Armstrong with a pudding basin haircut and a Scottish lilt as fellow pastor Brother Joseph, How Not To Live Your Life star Daniel Lawrence Taylor as a fellow (equally mysterious) shipwreck survivor, Geoff, and a brief glimpse of Kevin Eldon in a part which forms the core of Helene’s mystery, and the end result is an impressive cast having an absolute hoot. There’s even a cheeky appearance from another set of TVO faces – Antony Elvin, Will Summers and Michael Tyack as folk trio Princes In The Tower, though we suspect it didn’t take much costumery to make them look the part!

As with Davis previous work, the humour here is more subtle than many will be expecting, with difficult situations and uncomfortable surroundings opening up the possibilities for the type of silly wordings and oddball statements of which she is so fond.

Perhaps to be expected from a protégé of Coogan & Morris, the parody is perhaps almost too good – this is a beautifully shot costume drama, with muted colours and stuffy locations instilling a continued sense of unease. Credit must be given to director of photography Ian Moss (a costume drama veteran), and Nighty Night director Tony Dow, who returns here, for making the show look so beautiful to complement Davis wickedly sumptuous script.

All of the cast are pitch-perfect in the roles, and whilst the action, and therefore the comedy, is a little slow to get off the ground initially, the lengthy run time allows the first episode breathing space, where it can establish its surroundings before the race towards the finish line and an inevitable cliffhanger.

With six more episodes to go, including more of Kevin Eldon, it’s clear that Hunderby has Onion connections aplenty. Thankfully, what it also has is charm, beauty, and above all else, spiky wit and typically dark comedy from Julia’s twisted pen. It may be slow to get going, but stick with it, because this may be another classic in the making.