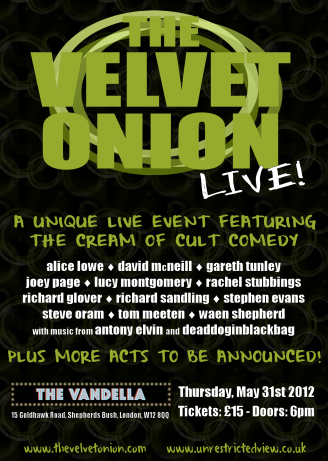 The Velvet Onion is going live!

Hands up – who thought our news about a TVO gig was a great big April Fool?  We just couldn’t help but tease with this one, but for the last few months we have been quietly preparing for our biggest challenge yet: Putting on our very own live show!

We are honoured to be able to confirm a star-studded bill set to take place at THE VANDELLA: The frankly brilliant new venue in Shepherd’s Bush that is set to be home to new club-nights by Oram & Meeten and Rich Fulcher in its very first month in business.

Run by James Wren, who also manages The Hen & Chickens, the retro-styled venue is intimate and cosy – the perfect place for a TVO rendezvous.

We’re also very proud to be working with Bob Pipe of The Forgery Club fame – a man who has put together more bills featuring our favourite people than anyone else on the planet, it seems!  Together, we have concocted quite a show – as you can see from our initial poster!

The gig is set to take place on Thursday, May 31st 2012 – and tickets will be on sale TOMORROW via Ticketweb, priced just £15.

We are overjoyed to have confirmed the following artists for your delectation:

As the poster states, we have more acts to be announced – and we’ll be doing so shortly, once we’ve finalised the various details… as mind-blowingly awesome as this bill is, you’d be mad to think this is all you’re gonna get from us!

Now we know the venue cannot possibly contain you all.  There are literally thousands and thousands of you good peelers worldwide, and we know that a 200 capacity venue with a strict 18s+ limit is going to mean a lot of you can’t be there on the night.  Those that can, we strongly advise you to get your ticket as soon as possible to avoid missing out!

So that no-one is left out, we’ll be armed with all manner of equipment on the night to bring you as much aftermath event coverage as we can in the form of exclusive interviews, behind the scenes photos, filmed performances and much more!

Stay peeled for all the latest news – and to steal a catchphrase from that man of action, Howard Moon: “Enjoy the show!”

5 Comments on The Velvet Onion Live!