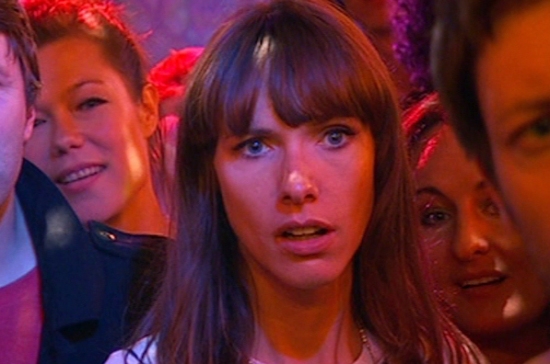 Actress Dolly Wells is a welcome new addition to The Velvet Onion family. Last Thursday she burst onto our TV screens as Noel’s enigmatic neighbour in his new series, Noel Fielding’s Luxury Comedy. We had the good fortune of convincing Dolly to talk to us about her latest role and discuss what else she’s been up to. Velveteer Mog reports.

Dolly Wells gives out the kind of infectious energy that makes you feel like you’re actually vibrating following a conversation with her. She’s blessed with a pair of endless pins that will make her as envied as she is adored by Fielding fans, and she sparkles with an easy sense of fun that can fool you into thinking you’ve known her for years.

Is she prepared to be the new poster girls for the Boosh generation? “I’m not prepared, but I’d be very happy, it would be fantastic!” She laughs. Dolly is just beginning to appreciate the intensity of Noel’s admirers; the number of people following her on twitter recently accelerated with the announcement of her involvement in Luxury Comedy, and she was immediately showered with tweets about working with Noel. “I made the mistake of not really understanding it and answering questions individually, and now I’ve realised that it might take up a few too many hours of the day!”

Her character in the show is a German trendy, loosely based on Nico (vocal collaborator with The Velvet Underground); however Noel insisted that she kept her real name, much to her consternation. “That is completely Noel’s fault,” she says, “I kept saying ‘Can’t I be called something like Jana or another German name?’ and he said ‘No, Dolly is better’ and he and Nigel (Coan, Luxury Comedy director and animator) were absolutely certain that I was going to be called Dolly. I got really self-conscious about it, and in the early days of filming Tom Meeten enjoyed putting my name in every single sentence because I was so embarrassed about it. Now I feel fine, I’m quite happy about it.”

Dolly also got the opportunity to play a myriad of other characters in the show, including a leek, a chav, a needle, Mrs Cockroach (who sadly doesn’t appear in the final cut) and a fashion deer. “I loved getting a chance to play other characters too. Dancing with Mike as the fashion deer was ace. As was my moment as the New York cop.”

When I ask her if she has a favourite character in the show she struggles to pick just one, listing out several characters’ names and providing  reasons why she loves each one. In fact one of the things that strikes me about Dolly’s attitude towards Luxury Comedy is how similar it is to someone who’s a fan of the show. Her excitement about the finished product and her involvement in it is palpable; words tumbling out and over one another as she joyfully describes the Luxury Comedy experience.

Eventually, she decides that Dondylion is her personal favourite. “It properly reminds you of being young at the zoo and there are those signs saying ‘Ignore the bears pacing, it’s because you’re feeding them’..little weird excuses. And even as a child you’re wondering why they’re doing that – it’s quite depressing. I think Noel embodied that so brilliantly – it’s a real observation that he’s turned into a proper character. It’s a piece of genius.”

We discuss how strong Noel’s performance is too. “He doesn’t see himself as an actor – and then he does that. Your head is just fizzing watching the amount of different things that he’s doing. He’s leaping around on set, painting plates at the back of the kitchen for the Renny & Gaviscon sketch, singing..I mean, there were times when he literally fell asleep in the corner for 20 minutes until he’d get up to do something else. He does so many different things, but he underestimates himself in terms of his acting ability. The show has really strong writing and fantastic costumes, but it’s not enough unless you really buy those characters as people. They’re such brilliant performances!”

Dolly fondly describes the characters as “really poignant, slightly-deluded, escapist people who we can all relate too.” She’s also full of praise for Noel and Nigel’s creative partnership on the show: “Their relationship is such a close, long-standing one and they both so care about how it looks. They’re not to going to stop until it’s perfect, until you can see Noel’s mind on the television – and it’s a real honour to see that.”

Surely she must have something bad to say about the experience though? After a moment’s thinking she admits that filming was “baking hot”, but then hastily adds that she shouldn’t be complaining because Noel was wearing a lot more layers than she was. After searching in vain for something negative to say, eventually she decides that her nervousness about whether she was good or funny enough probably counts: “Sometimes I’d get paranoid and I’d think ‘Help, I’ve got to think of something really funny to say.’ But I gradually got more confident and found my feet, which is why I hope we get the chance to do it again. It’s like doing a dare – you wonder if you’re up to it to begin with.” 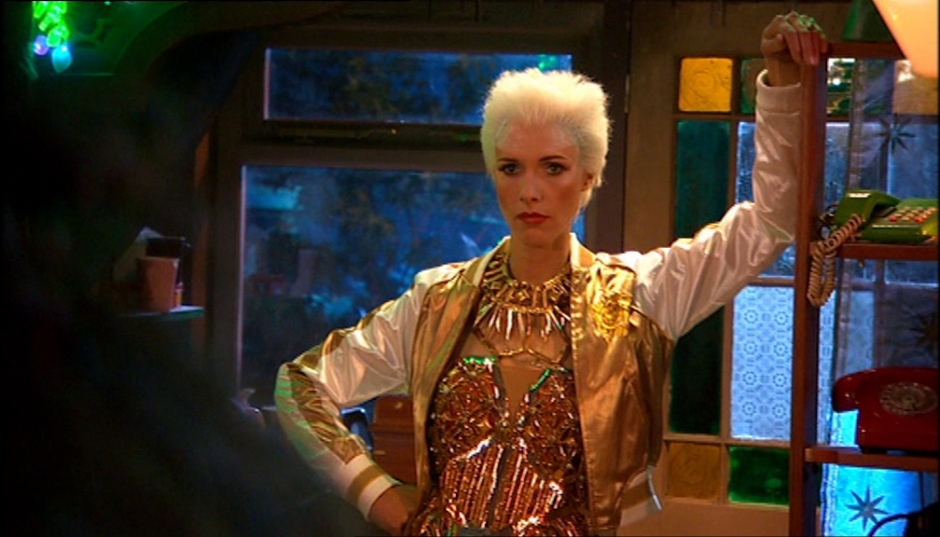 One of the reasons that filming Luxury Comedy was such a pleasure for Dolly is because many of the cast were good friends; she’s known Noel since she appeared in the IT Crowd with a bandaged face a few years ago (she also played the part of Methusulah in the ‘Party’ episode of the Boosh, series 3), and she has previously worked with Meeten on Channel 4’s Star Stories.

I ask her how she approached playing the celebrities in Star Stories – were they impersonations or something else? She hoots with laugher: “I can’t do impressions! When I’m playing someone like Cameron Diaz for instance, I just watched footage of her I thought ‘OK, she laughs quite a lot’ and then I play her laughing quite a lot. You just find something that amuses you or sticks out.”

Dolly contrasts her talents in this area with those of her father, actor and satirist, John Wells, who was famous for his impression of Denis Thatcher. She suggests that the caricature her father developed for him imbued the real Thatcher with a personality that made the ex-PM’s husband, “Someone rather adorable with a character that people liked, despite the fact that you’d never given him any thought before –  beyond having such a foul wife.”

Beyond Luxury Comedy, Dolly is about to start working on a new programme for BBC3 called Some Girls, in which she plays a New Zealand games teacher (perhaps she could ask Roy Circles for some advice?). Then she’ll be starting work on the second series of Spy, the award-winning, fast-paced Sky1 series.

She’s also been writing with her long-term writing partner, Laura Patch, with whom she created the charmingly daft series of sketches, Dolly & Laura (one of which features Noel Fielding as the object of Dolly’s ‘lesbian’ affections!). We discuss how difficult it is for comedy writers to get a foothold in the TV schedules these days,which in turn forces you to second-guess what other people will like rather than writing what you think is good. “Doing Luxury Comedy was a real lesson in writing and doing what you want to see.” Dolly says, “It’s the same with anything really – you can’t convince people of something if you’re not convinced of it yourself.”

So we’ve gone full-circle and come back round to Luxury Comedy. What’s Dolly’s final word on the show; how would she describe it?

“It’s a visual triumph and a labyrinth of words and songs. It feels like you’re so lucky to be allowed to watch it – I genuinely feel that.” You can even hear the smile in her voice. “You could get me to talk about this show for hours and weeks and I would not be disingenuous about it for a minute.”

Many thanks to Dolly for taking the time to talk to The Velvet Onion.

And don’t forget to tune into E4 at 10pm tonight to watch episode 2 of Luxury Comedy. We’ll be asking for your comments and reviews afterwards!