Tom Meeten is currently entertaining us in roles as diverse as Andy Warhol, Daran Cache and a fruit fly in Noel Fielding’s Luxury Comedy.  TVO’s Afroharold sheds a bit of light on his rich and varied career to date…

Whilst many comedy fans know him best for his work with Steve Oram, for a lot of Velvet Onion readers he will forever be identifiable thanks to his roles in The Mighty Boosh.  His first appearance on the series is in Fountain of Youth, as Pepo the artist who kills himself when Vince isn’t impressed with the fringe on his portrait.

He later appeared as the disreputable Lance Dior in the third series’ The Power of the Crimp. A near perfect clone of happy-go-lucky Vince, he and his jazzy Northern sidekick Harold Boon (Simon Farnaby) memorably fought Vince & Howard in an epic Crimp Off. Later, the character reappeared at The Royal Albert Hall, attempting to replace Vince at the opening of Noel Fielding’s Teenage Cancer Trust comedy night.

Casting Tom as Lance Dior was an inspired move as he has a similar  take on acting as Noel, an attractive man who is willing to make himself unattractive to the point of grotesque to bring a character to life. No one could call the fruit fly in Luxury Comedy attractive! Tom’s comedy partner is also a bearded bloke from somewhere north of London!

Away from the Boosh, Tom’s most notable collaboration has been with the aforementioned Steve Oram – himself no stranger to Vince Noir, having played Donny the Tramp in The Strange Tale Of The Crack Fox.   After a string of successful live shows, including memorable turns at the Edinburgh Fringe Festival, the pair crafted a television pilot together for Comedy Lab and posted a string of sketches on YouTube including cult classic Porto & Roy.

In 2011, Oram & Meeten developed a new pilot show for So Television, entitled The Forgotten Picture Show, joined by a huge cast of TVO favourites in a pitch perfect homage to 50s rock-n-roll movies.  The pilot is currently under development with plans to make a full series, and we at TVO can’t wait to see the results.

Collaborations with other names at TVO are frequent – from appearances in Jackal Films with Alice Lowe, such as the stupendously silly Birdhandler to his work with James Bachman and recently Arnab Chanda on sketches for BBC Nought – including a truly inspired turn as Jools Holland! 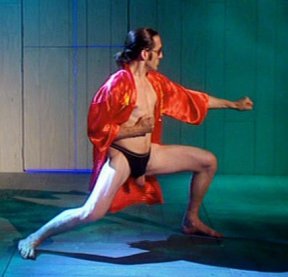 He has also appeared in a number of other notable shows from the TVO stables, including The IT Crowd, How not to Live Your Life, Saxondale, Lifespam and Beehive. He also made an everlasting impression in Blunder on Channel 4 as the surreal evil known as The Baron and the stupendously rude Karate Johnson. Although studio executives were impressed with his work on Blunder, he still hasn’t been given the opportunities his talents deserve to showcase them to a wider television audience.

Last year, following cameo appearances in Magicians and Burke & Hare, he played his first major leading role in a film via lo-budget Manchester rave scene flick Weekender, and he is set to appear in Oram & Lowe’s forthcoming film The Sightseers too.

As you can see Tom is a very talented actor, singer, writer and comedian, who has appeared in a variety of roles and is not afraid to wear outrageous costumes to complete a character. So if you were watching Luxury Comedy and wondering where you’ve seen him before, now you know!

2 Comments on Talking About Tom