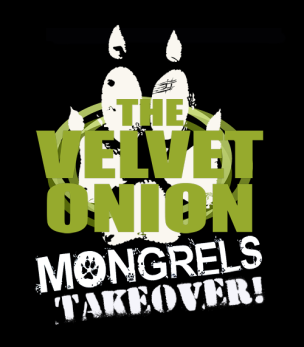 THIS COMPETITION IS NOW CLOSED. THANK YOU FOR YOUR ENTRIES!

Mongrels returns to BBC3 this evening at 10:30pm with a double bill of new episodes.

The new series sees the proud return of Nelson, Marion, Destiny, Kali and Vince, alongside Destiny’s hapless owner Gary, as they meet fascinating goldfish, sex-crazed zombie dogs, and a certain man by the name of Rich Fulcher.

With a string of special guest stars (everyone from Russell Tovey to Richard O’Brien!), Series Two promises to be bigger, bolder and better than ever.

To celebrate, we’ve been having a bit of a Mongrels take-over, with some exclusive interviews and clips on the site over the weekend, continuing throughout this week.

Now, TVO is proud to offer peelers a chance to win a copy of Series One of the show on dvd!

We have ten copies to give away, and all you have to do is answer the following question:

Which Mongrel is voicing the continuity announcements on BBC3 tonight?

Email the correct answer to mongrels@thevelvetonion.com by 11:59pm GMT on Wednesday November 9th 2011.  Ten entries will be selected at random to win a copy of Series One, and will be contacted to confirm their address details if successful. For terms and conditions, see below.

To find out the answer, tune into BBC3 tonight from 7pm – or if you’re outside the UK, or unable to watch live, scout out the social networks, because as that other famous Fox, Mr Mulder used to say: the truth is out there…

This competition is run by The Velvet Onion, with the permission of The British Broadcasting Corporation and 2|Entertain, but The British Broadcasting Corporation and 2|Entertain have no connection, responsibility or liability for the competition.  The Velvet Onion is an independent, non-profit organisation which has no official ties to The British Broadcasting Corporation, 2|Entertain, or the cast and crew of Mongrels.  All entries MUST be sent to mongrels@thevelvetonion.com by 11:59pm GMT on Wednesday November 9th 2011.  One entry per reader.  Multiple entries will be disqualified. International entries are accepted.  The prize of a dvd of series one of ‘Mongrels’ is for a UK release, encoded to Regions 2 & 4.  The Velvet Onion cannot provide alternative region coding, and it is up to the entrants to determine if they can or cannot play the dvd if they win the competition.  The Velvet Onion will not accept entries as comments on this article, replies on our Facebook/Twitter pages, messages on our forum or emailed to any other account.   No personal information required, and your email addresses will not be shared, or added to mailing lists or subscriber services.  Winners will be chosen at random from the entries, and the winning names will be printed on our website and/or social networking pages.   The Velvet Onion reserves the right to withdraw this competition if any overriding issues arise.  There is no monetary value to this competition and no physical prize.