As part of our retrospective posts about the Boosh radio series, in honour of it’s tenth anniversary, our editor took a close look at the the names, faces and programming which helped pave the way for The Mighty Boosh, and indeed everything we cover at The Velvet Onion.

Continually drawn back by every path to a handful of very prominent talents who shaped the face of British comedy as we experience it today, it became apparent that it can all be traced back to a little known radio series entitled On The Hour, and it’s very well known televisual adaptation, The Day Today.

In this two part article, today and tomorrow, we find out exactly why…

When the majority of Boosh fans first found the show, its fair to say they saw it as a breath of fresh air – a step into a fantastical world that was a world away from The Office, Little Britain and all the other big name sitcoms and sketch shows around when the tv series was in production.  For others, it was a logical progression.  The Boosh already had a successful radio series under their belts, and even before that was made, they had repeatedly wowed the crowds in Edinburgh with their live performances.

In retrospect, it’s also fair to say that the Boosh, and indeed, most of what we feature here at TVO, has a very strong lineage of classic comedy and legendary comic writers and actors who paved the way for their work, in much the same way comedy has continued through the ages, at least since the days of Spike Milligan and the rest of The Goons inspired Monty Python and The Goodies, who then inspired Not The Nine O’Clock News and The Comic Strip, and so on, and so on.

Looking back at the years leading up to The Boosh, we have a couple of names who not only helped bring the Boosh together and onto global stardom, but who continue to keep their oar into the realm of Booshdom to this very day, as well as making an incredible body of work in their own rights.  These names didn’t so much pass the torch and leave the new crowd to it: they actively collaborated with the next generation, bringing them to larger platforms and continuing to develop material with them over the years that followed. 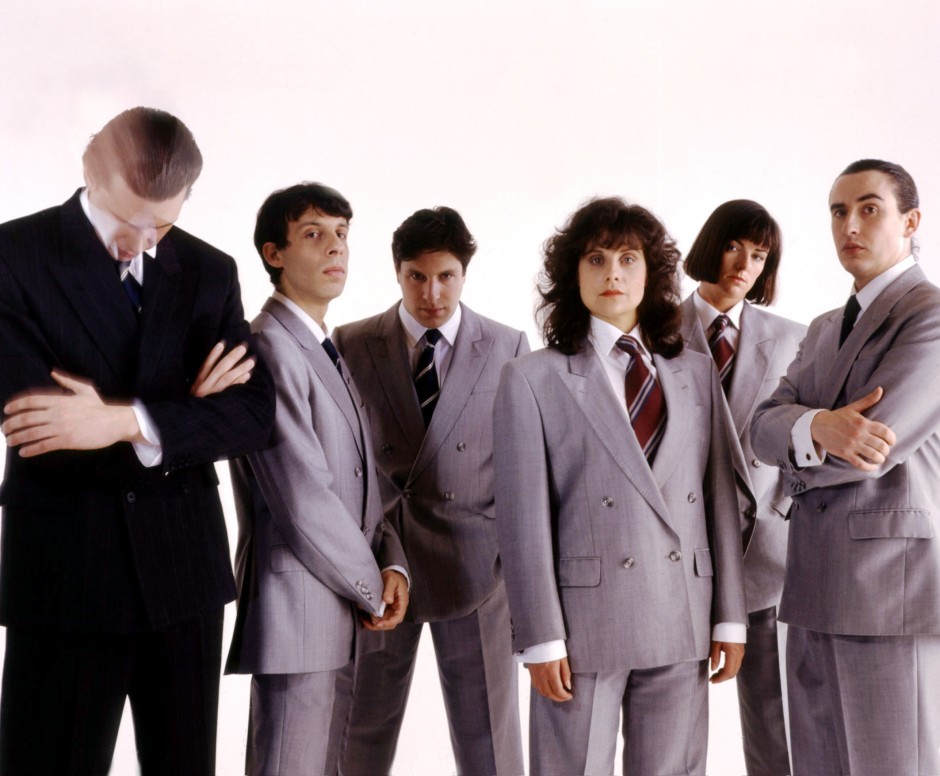 The majority of these people can actually be traced back to another, seminal radio series, entitled On The Hour.  A parody of current affairs programming: in turns supremely surrealistic and savagely satirical, it ran for two seasons in 1991 and 1992, and featured a number of writers and comic actors who went on to change the face of British comedy. Spearheaded by Chris Morris, who acted as lead writer and its wicked anchorman, the show’s writing team also featured Stewart Lee and Richard Herring, alongside Peter Baynham, Armando Iannuci, Steven Wells, Andrew Glover and David Quantick, and its cast, who also contributed to the scripts, were Patrick Marber, David Schneider, Rebecca Front, Doon Mackichan and, perhaps most importantly of all, Steve Coogan.

Presented as a highly realistic news show, listeners were often fooled into believing the pastiche was anything but, even in spite of ridiculous stories and vapid reporters peddling buffoonery, in much the same way Morris’ later works fooled many an audience member.  Whilst today it is perhaps best known as the birth place of Coogan’s behemoth tragi-comic masterpiece Alan Partridge, On The Hour has so much more going for it: mostly because everything that Chris Morris went on to build his reputation upon saw its genesis here.  Cut and paste soundscapes, interviews with confused ‘real people’ and spectacular, nonsensical stories like: “Nineteen In Fog-Bound Bakery Collision” or “Panic As European Average Falls Below The European Average”.

After two award winning seasons, the show transferred to television – revamped as The Day Today.  Due to a legal dispute, Lee & Herring departed from the writing team, and would soon make their own mark on the decade’s comedy landscape, more on which in due time.  Replacing them were two young, Irish writers – Arthur Matthews and Graham Linehan, the latter of whom would go on to play an active part in ‘Booshdom’ in the years to come.  The name was changed, but the formula remained essentially the same: naturally turned up to eleven, as the visual medium allowed Morris and company to play up to the increasingly ridiculous nature of on-screen news graphics, and telling camera short-hands used to manipulate stories, and arguably, the audience, into whatever the producers wish.

It is perhaps frightening to realise that, as the years go by, The Day Today becomes increasingly relevant despite it’s cultural references [particularly in politics] now being several generations out of date.  Once seen, a cursory glance of the preposterous nature of many a news bulletin today will always remind you of Ted Maul, Collaterlie Sisters, Barbara Wintergreen, Peter O’Hanraha-Hanrahan and the rest of the oddball news team that make up Morris’ sublimely preposterous yet utterly believable world filled with bomb dogs, Prime Ministerial punch ups with monarchs and so many, many more ridiculously hilarious sequences.  Not a second of screen-time is wasted: The Day Today truly is comedic gold.

Whilst Morris went on to make Brass Eye, Jam, Nathan Barley and Four Lions [all featuring input from TVO regulars like Julia Davies and the Boosh boys themselves], other members of the On The Hour/The Day Today team continued to play a part in the intricate back-story of The Velvet Onion.  The aforementioned Stuart Lee & Richard Herring were no exception.  Moving on from On The Hour following a fall-out with other members of the team, the pair crafted surreal and topical radio series Lionel Nimrod’s Inexplicable World – co-starring fellow OTH veterans Armando Iannucci and Rebecca Front, alongside former Doctor Who star Tom Baker as the show’s narrator, years before his similar turn on Little Britain – before moving onto the much acclaimed radio show Fist Of Fun.

Fist gained a cult following that meant, like On The Hour before it, it moved swiftly to television.  Part sketch show, part lifestyle magazine spoof, the television series was, like The Day Today, a breath of fresh air when it came to British screens in 1995.  Caught up in the era of Britpop, Lee & Herring were amongst the first rock & roll comedians: of which The Boosh are a natural descendent, and their swaggering, nonsensical ramblings, ably supported by the likes of (The Actor) Kevin Eldon, Peter Baynham, Rebecca Front and Sally Phillips, saw them through two seasons of the show in the mid 90s.  Many a student dorm (and let’s face it, school playground) was filled with cries for “Weak Lemon Drink”, “Green Jelly” or that Jesus was behind you and the girl across the room smelt of Spam.

When the pair moved onto Sunday afternoons with an equally bonkers show, This Morning With Richard Not Judy, their cult status rocketed even further. TMWRNJ was, in retrospect, a bizarre offering. A live show, from two comics whose prior work for the BBC was fun but slightly edgy, dumped onto Sunday afternoons directly after children’s programming finished on BBC2.  It would never happen today, and it’s surprising there wasn’t more of an outcry as several sketches were clearly aimed at the post-watershed crowd – but logically, it’s timeslot made it the ideal wakeup port of call for everyone who’d been out on the town the night before.  Whilst the BBC never really knew what to do with it [no promotion, cancelled repeats etc], it remains a firm favourite amongst comedy fans and bootleg copies are widely circulated as the BBC claim to have lost the master recordings!  Thankfully, Fist Of Fun hasn’t suffered the same fate, and is set for independent dvd release very soon.

Post TMWRNJ, Lee & Herring went their separate ways, only sporadically performing together again.  Richard Herring went on to podcast fame, and a string of incredibly successful, and often controversial stand-up tours, whilst Stewart Lee’s path followed similar lines, albeit it with added novels, stage-show musicals and most recently, two cult series of his stand-up, Comedy Vehicle.  It was Lee who played one of the most important roles in the development of The Mighty Boosh – not least because it was on his live Edinburgh show, King Kong vs Moby Dick in which Noel Fielding and Julian Barratt first worked together, famously as a whale and a giant penis.

Lee returned the favour by directing their 1999 Edinburgh show, Arctic Boosh, which of course, mutated into the Tundra episode of the radio series, which became the episode of the same name in the television series, and the main influence on their first full-blown UK tour in 2006.  Away from the Boosh themselves, he furthered his links into Booshdom with a regular appearance alongside Richard Ayoade and Matt Holness in Time Trumpet [whose writing staff also featured Sightseers director Ben Wheatley – small world, eh?], so perhaps we haven’t quite heard the last of him on TVO just yet!

NEXT TIME: The Irish writing legend, and the men behind Baby Cow…

On The Hour S1 & S2 and The Day Today are available now from The Velvet Onion Amazon Store.  Fist Of Fun Series One is available on dvd soon from GoFasterStripe.

1 Comment on Boosh Origins: On The Hour… [Part One]