Earlier this month Dan Clark ended his official UK tour and to round off his time on the road, where else to bring it to a close than in his home town of London?

Thankfully, Velveteers were on hand to document proceedings.  Here is their report.

Last Friday Clark, walked onto the stage at the Bloomsbury Theatre to an uproar of cheers from the crowd who would have most likely fallen for his charm on his BBC Three show How Not To Live Your Life, which has now come to its 3rd series and is available to pre-order.

Before Dan’s entrance, we were given a pleasant surprise in the form of David Armand. Otherwise known as Eddie in How Not To Live and who performed for us as Johan Lippowitz, David is most famous for his spectacular deadpan mime to the song ‘Torn’ by Natalie Imbruglia. On this night however, he treated us to a mime of MJ’s Man in the Mirror. A genuine surprise for everyone that lifted the spirits of the entire room and gave Clark a wonderfully warmed-up audience to walk on to.

Dan started the evening with some audience banter where, to his despair, he noticed that at this apparent ‘full house’ show there were several empty seats on the front row. He then proceeded to blame the man sitting next to the missing audience members. In Clark’s head, however, he filled the seats with some intellectual types with beards and suits. I hope they enjoyed the show anyway! The first half was a selection of anecdotes centring around Dan’s relationship skills and sex life (not too far from his alter ego Don Danbury), also a cute routine about an ant, a classic that was well received and I myself was happy to hear again along with everyone else. 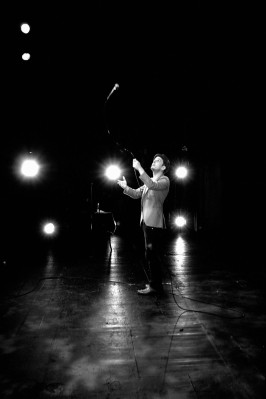 What makes Clark so loved on stage is his ability to interact with the audience in an almost one to one way. Other people seemed to think this too as they tried to respond as if in a conversation with him, this tended to slow down the pace of his routines however each joke was still delivered with confidence and got just a big a laugh as they would any other night.

During the second half was where the night took a slightly different turn. This was where Ben Parker was introduced and we were given a selection of hilarious songs that Clark is known for in HNTLYL and also if you’ve been lucky enough to see  him live before.

Parker reminded us of his own composition of the theme tune and was present for the entire second half for the songs, where he gave backing vocals and guitar and bass as well as a maraca and a tambourine for some songs (he doesn’t have 8 arm’s – you’ll have to see for yourself to find out!)

Clark’s jokes are at the point of polished – which is expected after performing the show a number of times – but my personal favourite moment however being a short segment where he read out some short, dry one liners from his notes. It’s something that you would expect more from a warm up gig (and was done during his warm up show earlier this year), but each line was greatly received and it was something refreshing amongst the story-based routines.

Not only was the second half a completely different style to the usual stand up once the guitars were pulled out, but my fellow audience members also seemed to morph into a more rowdy, slurring crowd that wanted more involvement. There were declarations of ‘I love you’ which became even worse later on and another specific member (who could barely keep himself upright as I saw myself in the intermission) thought that he deserved the limelight more than the two gentleman on stage. Hecklers are expected at these shows more often than not and so a comic who has trodden the boards for many-a-year capably took the said heckler down a peg or two – even though he was probably too inebriated to comprehend what was being said about him (it was even declared in song form during the encore).

Overall a fun night bar the attempted sabotage but the remainder of the crowd stuck with him for it all and enjoyed every moment – from songs about wearing his girlfriend’s underwear to stories about childhood boredom. A feel-good evening that had its up and downs but was a night of intimate banter as if sitting with Clark in your lounge with a brew. And who wouldn’t like that?

Dan Clark’s show at the Bloomsbury theatre was recorded for audio so any more information on the audiobook of the show will be peeled as soon as we find it! You can also still grab some tickets for his second stint at the Bloomsbury on June 1st right here.