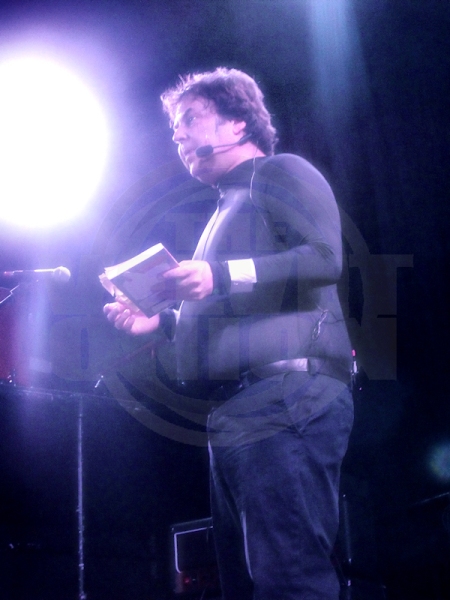 Saturday night saw Rich Fulcher tackle not one, but two live appointments in North London. Hot on the heels of his appearance with The Mighty Boosh Band, Fulcher also headlined the second ever Fulchfest at The Bull & Gate, Kentish Town.  A number of TVO’s Velveteers were on hand to witness events, and this is our editor in chief’s extensive review…

Rich Fulcher is late.  Very late.  It’s an accident of design that could not be avoided, with Rich double booked on the other side of Camden alongside the rest of the Boosh Band.  As he struggles with taxis that decide not to hang around to pick him up, the mass crowd squashed into the miniscule back room of the Bull and Gate pub in Kentish Town could very easily have been getting impatient.  The tables and chairs are all spoken for and as the free for all mega-crush at the back of the room begins, most people have wisely opted to buy all their beer early on, rather than risk the assault course journey to the bar later.

Now any seasoned comedy fan will tell you that there is little worse at a stand-up show than an audience that doesn’t really want to be entertained, but just wants to get blind drunk and make a scene.  However, it’s clear from the get-go that the last thing on the collective minds of this audience is how to null the senses with alcohol.  They are there for the comedy, and more specifically, for one man in particular. 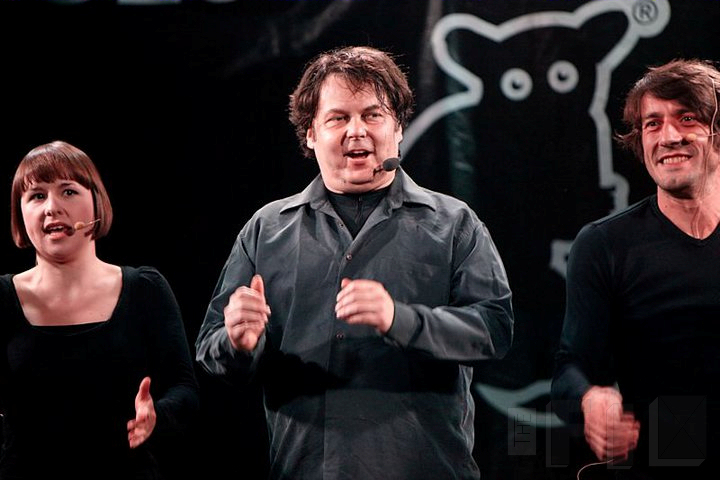 After a prolonged warm-up from the eccentric talents of house band Premature Ejazzulation, Mr Fulcher storms onto the stage, still dripping with the remnants of his Boosh Band make-up and still wearing the skin-tight black costume he warped the minds of Zappa fans with over at the Roundhouse just twenty minutes previously.  The crowd went wild, eager to see their favourite, deeply apologetic` American in action, and perhaps still fuelled by the adrenaline rush, Rich is more than ready to live up to their expectations – throwing sweets into the crowd and leading a fabulously sloppy audience-involving sing-a-long of disco classic Celebration.

When he is warned not to throw tampons, scissors and Metro newspapers at the assembled crowd,  Rich is joined on stage by members of The Rich Fulcher Players – which includes TVO favourite Tom Meeten.  Throughout the night, less than subtle hints are dropped that his team are malnourished, underpaid and generally mistreated… and one of them has vanished without a trace.  It’s an interesting approach which gives the night a much needed narrative strand, tying events together with the same black humour that Matt Berry’s live shows are famed for, but with a more knowing wink to the crowds as Rich and co ham it up like the best of them.

Sadly, the first act doesn’t give an indication of the quality we know much of this bill is capable of.  Ray Presto is an ageing magician whose main joke seems to be that he can actually do basic magic tricks.  Any hopes that it’s all a clever ruse, and a twist the size of Belgium will be sprung at any moment are never fulfilled – with his act eventually being stopped by Fulcher who helpfully got his facts about Presto wrong and mixed them up with notes on Bruce Willis.  The majority of the crowd seem to lap it up, but pockets of confusion are more than apparent: quite simply, a non-comic first up on a bill packed with first-rate comedians is never a good move. 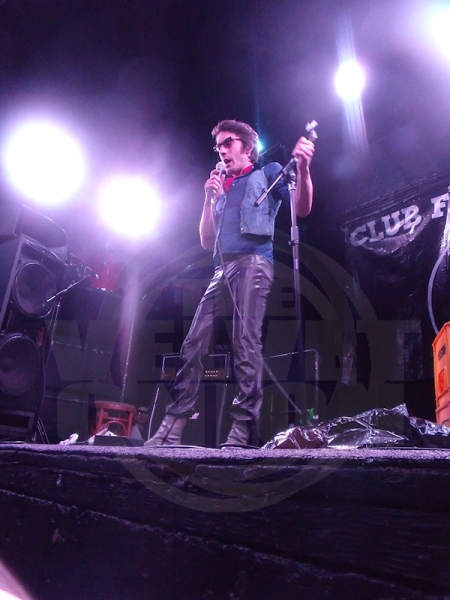 Things improve when Tom Meeten, temporarily freed from the Rich Fulcher Players, reappears in leather pants and thick rimmed glasses, masquerading as an eccentric European singer called Franco Franco who has written a song dedicated to his son, the ‘mongloidchild’ in dire need of a wheelchair.  It’s utterly ridiculous nonsense, which harks back to the finest of Oram & Meeten sketches, and goes down a storm as Meeten thrusts about the stage without hestitation.  It’s a short but sweet moment, and demonstrates what a gleeful madman Meeten can be when given free reign.

Rich soon returns with a fine slice of audience participation.  As this weekend saw the UK celebrate Guy Fawks night, our intrepid host has decided to honour the proceedings via a mime re-enactment of the life of Guy F***s (sic), which spookily enough mirrors that of the plot of Die Hard.  As a happy-go-lucky volunteer is plunged into the mad, mad world of Rich’s mind for a short time, the audience is warmed up for an elongated set from another TVO favourite – Hot Brew.

The folktastic parody duo comprising of Alice Lowe and Antony Elvin as Oona and Crispin Wheatflake treat the crowd to a selection of songs from their ever increasing repertoire, including tales of alien rape, tea-bagging and wooden trousers with special hinges.  With a bevy of new material to try out, its clear that the duo are fast becoming a major force to be reckoned with, and whilst there is the occasional heckle from the back of the room, Lowe is quick to turn every one of them into a full blown laugh in her favour.  Even microphone troubles are no match for Alice tonight, and together with Antony’s nonsensical asides and skilled guitar work, the audience can’t help but fall for their kooky charms.  The sight of Lowe dragging a hapless punter up onto the stage and forcing him to grate a carrot in front of Oona’s lady bits before Crispin and his parsnip take over is something many of the crowd will never be able to erase from the backs of their minds, but that’s no bad thing when the results are this amusing.

Returning from the break, houseband Premature Ejazzulation have a moment in the spotlight, though their admittedly amusing slant on popular songs of today in a strong Northern accent has been done much better by many others before them, and their role in the night goes on just a bit too long and can’t help but feel like a chance to prolong the intermission for the rest of the performers.  Until that is, like Presto before them, Fulcher bursts on stage and interrupts them mid-act – this time half naked and wearing a crack syringe, acting as if he’s beyond high.  The fun here comes from the return of the Rich Fulcher Players, who continue their attempts to escape the tyranny of their comedic master and again, fail miserably – with hilarious consequences.

Perhaps this flight of fancy is the reason why some of the crowd don’t quite seem to take to Colin Hoult’s appearance as Nottingham’s #1 Aliens Vs Predator: Requiem fan Andy Parker – as if a handful of audience members can’t quite understand if this is another character or a genuine persona.  Several people at the front of the crowd, perhaps feeling weary of being the target of jokes from the stage, fail to respond to his call outs,  which, of course, does Hoult something of a disservice.  Parker is one of the many highlights of his current live show Enemy Of The World,  and thankfully after a slightly slow start, Hoult quickly wins the room with Parker’s detailed explanation of the film he’s writing about the murderous exploits of a creepy serial killer by the name of Mr Giggles.  It’s perfectly observed character comedy at its absolute finest, and Colin’s sheer determination and ability to make even the stupidest of his creations somehow likeable wins out as he leaves the stage to riotous applause.

The final act of the evening are the Irish hip-hop duo Abandoman, who by their very nature have an even harder time convincing the audience to love them – a fact they themselves are quick to point out.  Their impressive gambit is to create a love rap-song using the most random objects the audience has in its pockets, from condoms and plastic ducks to margarine and an ounce of weed.  It’s quick witted improv with a heavy dosage of audience participation, and within two minutes its safe to say the majority of the audience have fallen in love with their charms, bringing the main part of the evening to an energetic conclusion.

Bringing everyone back on stage, Fulcher quickly provides the talented duo with a recap of the entire show which they then turn into yet another improv slice of musical funpie – and by the song’s climax the indoor fireworks and partypoppers that are set off are justly deserved.  Fulchfest may still be developing, the venue may be way too small for the number of tickets being sold, and there may be a few choices on the bill that don’t always seem to quite make sense, but as a platform to allow fans of the Booshdom brand of comedy to see some of the finest acts on the London circuit, there’s none finer.  Long may it reign.

Rich Fulcher returns to The Bull & Gate, Kentish Town with another round of Fulchfest next month. The event, in collaboration with The Fix, is set to feature Adam Buxton & Waen Sheperd, with more acts to be announced.  Stay peeled for more info.  You can find more great comedy from The Fix at their website here, and if you’d like to see a great slice of non-Booshniverse comedy from one of the people behind Fulchfest, click here…