To continue our IT Crowd week, in the build up to the launch of the fourth series on June 25th, we at TVO thought we could be of assistance to those viewers who just can’t quite put a name to a face.

The series has had its fair share of cameos, especially during its first season, and a number of familiar faces have appeared on our screens alongside Jen, Roy, Moss, Douglas, Denholm and Richmond.

To help jog your memory, we’ve created a two part crash-course into all of these faces, so any fans of the show who are trying to learn more about this wider world behind the show can finally figure out exactly where they know each guest star from!

Danny Wallace portayed Renholm Industries Cultural Advisor, who acts fast on the profanity buzzer. And if anyone in the Booshniverse truly spans the genres it is Mr Wallace. Writer, producer, journalist, he was beside the Boosh boys at the difficult start in their careers, producing their Radio 4 show in a studio, or ‘Mens toilet’ as he so eloquently puts it.

Now with 7 books under his belt and on the shelves, one of which, Yes Man became a US blockbuster starring Jim Carey, its safe to say Danny’s a very notable figure indeed.

The Japanese businessman who recieves a rather large and heavy pair of Doc Marten boots  in Calamity Jen, as well as on the other end of a video conference call with Douglas in From Hell, was played by Togo Igawa.

This Japanese star has appeared in films such as Revolver and Memoirs of a Geisha, but sci-fi fans may be more familiar with his appearance in the first series of Torchwood, in which he met a nasty fate at the hands of a semi converted female Cyberman!

Anyone on this site who isn’t familiar with the lovely lady who played Patricia in Fifty-Fifty should instantly stop what they’re doing and find out more about her.

Boosh fans got to see her once in series two of The Mighty Boosh as Monkey (in The Priest & The Beast), and in 2007 she wrote and starred in her own BBC 3 pilot Lifespam, which was sadly not commissioned despite being one of the most quotable pieces of telly in years.  Post Lifespam, Alice is the co-founder of Jackal Films, a production company who have taken on the challenge of posting a comedy short online every month of 2010, all of which we’ve reported on via these very pages.  A huge friend to The Velvet Onion, Alice is definitely one to watch.

A slightly less well known yet arguably more familiar face is Oliver Chris, who remains most famous for playing Ricky in The Office, as well as Boyce in the surreal hospital sitcom Green Wing and he also appears in the hit movie Bridget Jones’ Diary.

However, his role as the Security Guard who chooses clueless Jen to be his ‘Phone A Friend’ on Who Wants To Be A Millionaire, and ends up being laughed at by a clown and serenaded by a man who looks suspiciously like Graham Linehan (nudge, nudge, wink, wink), Oliver has another connection to the Booshniverse.

Back in 2005, he played Max Herbert in Nathan Barley – Dan Ashcroft’s “friend” from The Sunday Times who attempted to get Dan a job on the paper in a car-crash interview that leaves Ashcroft with little choice but to go back to the idiots at Suga(r)ape.

The Haunting Of Bill Crouse

The part of this episode’s titular character, who takes advantage of Jen’s supposed death right after their unsuccessful first date is played by Adam Buxton.

Adam has been a familiar face on tv screens for many years now, first appearing with his friend Joe Cornish on Channel 4’s submission show Take Over TV, the pair won their own show from the broadcaster, The Adam & Joe Show – which ran for four seasons before the duo upped anchor and joined the BBC.  After several tv projects, Adam & Joe found their new home on BBC 6Music, and as well as hosting their own show together, Adam has recently been branching out with his own show Adam Buxton’s Big Mix Tape – the first episode of which featured none other than Julian Barratt.

As well as all this work with Joe Cornish, Adam is a regular YouTuber, and his frequent skits were turned into a BBC 3 pilot, meeBOX in 2008 which was sadly not commissioned by the channel.  He also memorably appeared in the Pegg/Frost/Wright movie Hot Fuzz as the editor of the local newspaper, Tim Messenger – who receives one of the grisliest send-offs in cinema history!  And for one last bit of a Boosh connection – he replaced Noel Fielding as a ghost in the movie Stardust after Noel fell ill!

You may not know her name, but Cheryl Fergison has become a familiar face to millions since appearing as office cleaner Judy in this episode.  Complete with three rows of teeth and hair on her eyes, she took a shine to Roy in a series of memorable set-pieces.

However, even this, and her appearances in Doctor Who, The Bill and Little Britain pale in comparison to her role as Heather Trott in popular soap opera Eastenders – a role she took up in 2007 and shows no sign of relinquishing any time soon! 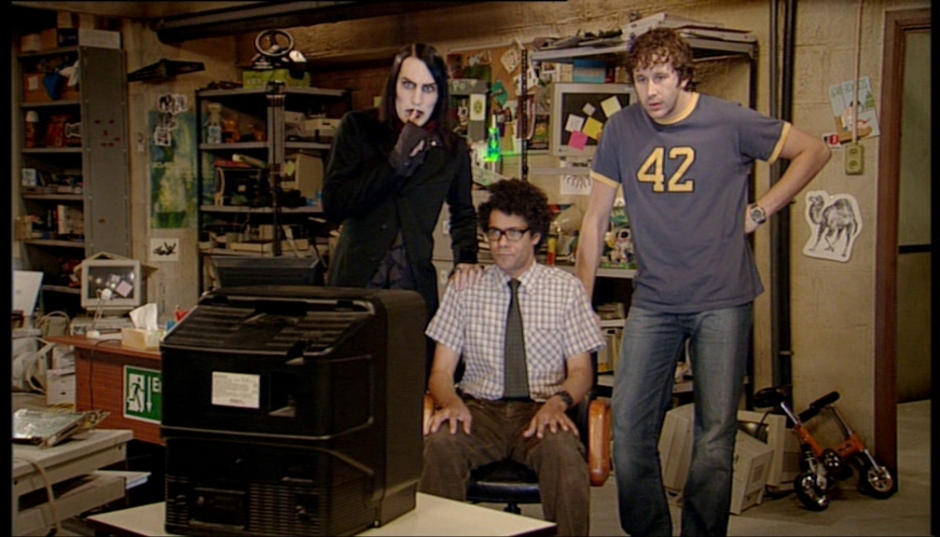 A small but worthwhile role as the voice of a newsreader in this episode, and the earlier Calamity Jen goes to the legendary Peter Serafinowicz.

Best known to international audiences as the voice of Darth Maul in Star Wars Episode I: The Phantom Menace – a role he mercilessly spoofed as Darth Chef in a memorable episode of South Park, Peter has been a familiar face on British tv screens for over a decade.

First coming to many people’s attention as Duane Benzie in Spaced, Serafinowicz also appeared in ITV sitcom Hardware and a string of cameos in other people’s shows, including Black Books and Smack The Pony.  He also portrayed flatmate-turned-zombie Pete in Shaun Of The Dead, and is set to portray Paul McCartney (he does great impressions of all four Beatles, for the record!) in the new CGI re-imagining of Yellow Submarine.

But it is with his own shows with which he really secured a place in our hearts here at TVO.  First came Look Around You, a spoof science program which ran for two very different series in 2002 and 2005, and most recently he re-teamed up with regular collaborator Robert Popper, his brother James Serafinowicz, comic actor Paul Putner and our very own Matt Berry to create The Peter Serafinowicz Show – an award winning and critically acclaimed sketch-show which ran for one series and a Christmas special.  Despite the dvd becoming a huge seller, there are quite criminally no plans for a second series – but we can’t wait to see what Peter comes up with next.

With a long and distinguished career in film, stage and television behind her, Barber is a familiar face to many and a real coup casting.  On stage, she has appeared in everything from Royal Shakespeare Company productions of King Lear, to the Pet Shop Boys musical Closer To Heaven!

And comedy fans may recognise her from her appearances in Funland, Murder Most Horrid or, most famously, Red Dwarf – in which she played one incarnation of the shape-shifting, emotion-eating Polymorph: a genetic mutant whom The Cat was convinced was called Jenny something…

2 Comments on Haven’t I Seen You Before? Part One